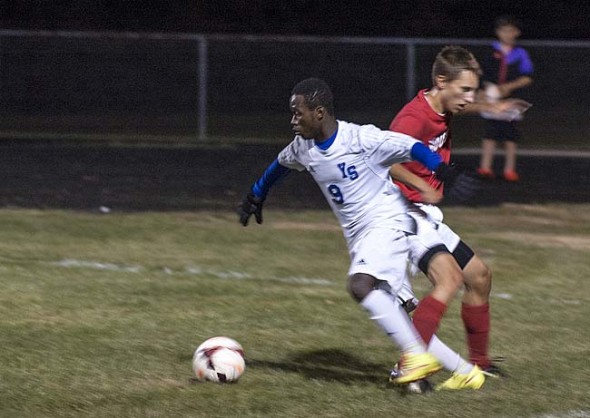 Levi Jackson won the ball from a Twin Valley South player on the way to the Bulldogs’ 7–0 home victory over the West Alexandria team in the first round of Div. III sectional tournament play on Wednesday, Oct. 21. (photo by Aaron Zaremsky)

Boys Soccer
It’s a good feeling when your hometown team does well. It’s an even better feeling when that team represents your alma mater. And it is better still when you are the coach of your alma mater’s successful team. This three-fold contentment is where Yellow Springs High School boys soccer coach Ben VanAusdal currently finds himself. The soccer team has advanced three brackets in the Division III sectional tournament in the past week, beating Twin Valley South 7–0 on Oct. 21, Preble Shawnee 4–0 on Oct. 24 and Miami East 2–1 on the rainy evening of Oct. 27.

Simply put, “we’re playing very well right now,” said VanAusdal. The players know the pressure is on them, he said, but they feel it and thrive on it.
“Every game is high stakes from now on,” he said.

The Bulldogs know what is at stake. Two years ago, they were district champions with a season record of 16–1–1. Last year the team got as far as they are now before losing to a “powerhouse team” from Cincinnati. The seniors are especially hungry for victory because they’d like to end their high school careers with the klaxons of triumph ringing in their ears. And they want to do it in the company of the friends and teammates they’ve been playing with for years.

Oct. 21 awarded the Bulldogs their first victory on the road to soccer stardom. The game was mostly on their opponent’s end of the pitch, VanAusdal said — Twin Valley South only had one shot at Yellow Springs’ goal. While the team was a “pretty decent opponent,” YS dispatched them handily in a match characterized as a “well-controlled game” in which Yellow Springs dominated enough to allow its defense to play offense as well.

The Bulldogs have been doing so well this year because the chemistry and camaraderie of the team is unparalleled, VanAusdal explained. Though the team is remarkably young — there were eight freshmen on this year’s varsity team — the younger players are all higher-level and the upperclassmen have been pushing them and passing on their knowledge, he said. And the younger players listen.

The team’s skills were brought to the field on Saturday, Oct. 24, when the Bulldogs played in round 2 of the tournament against Preble Shawnee. It was a rainy game, slippery on the pitch, and while the Bulldogs were victorious, VanAudsal maintains that the game could have gone better. The team wasn’t able to run a stellar offense based on tight passing, but they played well enough for a win that built their confidence and stoked their resolve for their next game against sixth-seed team Miami East on Oct. 27.

VanAusdal’s 10 years as assistant coach, four years as head coach, and experience playing in school and college give him a veteran’s perspective on the game. He said that after a number of good seniors left last year, he was expecting a “rebuilding year” in which incoming players and older players would recalibrate and learn to play together. But the team’s aforementioned camaraderie has propelled them past a learning season.

“It was going to be a challenge, but they knew it,” VanAusdal said. “If they lose, they lose. But if they win, they go on to bigger games.”

The girls finished in the 80th percentile of runners, with Olivia Brintlinger-Conn finishing in 22:29 for 22nd place, and Maya Creighton squashing the competition and finishing in 23:27 for 36th place. McKinney girls also did well, with Emma Ronnebaum taking 21st place after running the 3200 meter in 14:00, Shaylee Smith taking 75th in 16:55, and Priscilla Hadap finishing close behind in 17:15 for 77th place.