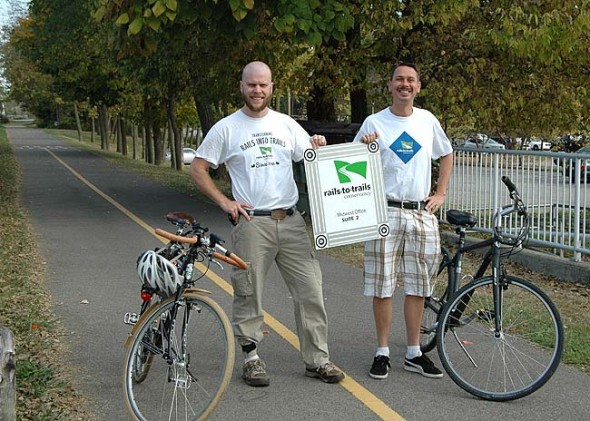 Rails-to-Trails Conservancy’s Erik Oberg and Brian Housh stand on the Little Miami Scenic Trail, holding aloft the placard that will hang in front of RTC’s new Midwest office on Xenia Avenue. RTC is a nonprofit that works with communities small and large to promote the creation of trails nationwide.  (Photo by Dylan Taylor-Lehman)

The distinctions bestowed upon the Little Miami Scenic Trail are numerous. The Trail, running through Yellow Springs from Springfield to Cincinnati and ultimately branching off and connecting with metro trails in Columbus and Dayton, is the longest connected paved trail system in the U.S. Its 75 miles of asphalt are “unbelievably well-maintained,” which is no small feat considering the Trail spans four counties and numerous municipalities, according to Erik Oberg, Manager of Trail Development at the Midwest Regional Office of the Rails-to-Trails Conservancy. The trail user’s experience is “unchanged by jurisdiction” because of the region’s commitment to maintaining the trail, he said, noting that the same can’t be said for area roads.

Oberg is qualified to make these assessments. The Rails-to-Trails Conservancy (RTC) is a nonprofit that works with communities small and large to promote the creation of trails nationwide.

The nonprofit is based in Washington, D.C., and has regional offices across the country. As of last week, RTC’s newest office is in Yellow Springs, located at 716 Xenia Ave. Oberg has been at the helm of the Midwest office for the past nine years, where he worked from home before relocating to Yellow Springs to open a brick-and-mortar office.

RTC undertakes activities like GPS mapping, legal advocacy, scouting land for use and partnering with other groups to advocate for the creation of public biking and walking trails. Oberg explained that trails are not just about recreation; they facilitate economic development, rework transportation and represent a broad spectrum of health benefits. Trails can be transformational on a community scale and beyond, he said.

“The whole point of Rails-to-Trails is to try to get as many public trails on the ground as we can, nationwide,” Oberg said.

To celebrate the opening of its Yellow Springs headquarters, RTC Midwest will be throwing a housewarming party. The festivities will take place on Saturday, Oct. 17, from 11 a.m. to 4 p.m. at the new office at 716 Xenia Ave. The event will include games, giveaways and the perennial favorite of parties open to the public, free food. The Village Cyclery will be giving free bike safety checks. Films highlighting the history of RTC will be shown at the Little Art Theatre starting at 11 a.m., and there will be an open house at the new office from 1–4 p.m. There will be a demonstration of the Link Bike Share system, a bike-rental service in Dayton, at 2 p.m., followed by remarks from community leaders. A classic ribbon-cutting ceremony will take place at the new office, featuring a Village official wielding giant scissors.

“Yellow Springs is such a natural fit for this organization,” Oberg said. “It’s fun to have the organization in a place so identifiable with what our mission is and what we’re trying to do.”

The first rail-to-trail conversion in the U.S. took place in 1966. The railroad industry was abandoning 4,000 to 8,000 miles of lines each year in the early 1980s, and the erstwhile rail corridors were quickly (albeit unofficially) utilized for cross-country skiing and walking. A group of “walking and biking enthusiasts, railroad history buffs, conservation and parks groups and active-transportation activists” got together in 1983 in an effort to turn these corridors into useable trails. When RTB was founded in 1986, there were around 250 miles of rail-trails. Today there are more than 20,000 miles across the 50 states.

RTC has been engaged in trail visioning in southwest Ohio and the Miami Valley for many years, and not just since the move, said Brian Housh, the new policy manager at RTC and a Village Council member. He said the nonprofit has been involved with trying to connect the Miami Valley trails into Indiana, including landing a major grant for a cross-state trail gateway park in Union City, Ohio, and has developed long partnerships with regional trail building nonprofits and agencies like municipal parks departments.

Yellow Springs in particular is an area conducive to civic investment in trails, a “hub for advocacy and initiative,” said Housh. Businesses are drawn to the activity surrounding trails, and Yellow Springs is good about incubating businesses, Housh said, such as the Yellow Springs Brewery, which is located on the Little Miami Trail.

According to Oberg, the livability index of cities is placing an increasingly high premium on the availability of trails, because their use has become much more widespread in daily life. A well-maintained trail network that will take someone from home to work and back is a benefit many seek when looking for a home, he said.

Evidence of this interest can be seen regionally.

“I’m impressed with how many commute to Dayton year-round,” said Housh. “And there has been a 297 percent increase of Cincinnati bikers commuting to work over the last four years.”

Regional organizations and governments (including Yellow Springs’) are lobbying to host the 2017 International Trails Symposium in Dayton, an event with which RTC is involved.

Housh and Oberg said that RTC’s presence in Yellow Springs will help to get the conversation going even further about trails, and will be there to support local initiatives that facilitate their creation. The variety of groups that will be giving information and demonstrations at RTC’s open house underscore the many ways in which trails benefit the community. Housh said that a large part of his focus for the year will be promoting active transportation and making it easier to do so by working with area governments to secure federal funds to support trail projects.

The stature of the Little Miami Trail and the region’s support of trails in general could serve as an example that could inspire the rest of the country.
“I think there will be many things we can do for Yellow Springs just because we’re here,” Oberg said, “and I think [us being] here will give Yellow Springs more notoriety on the national stage.”