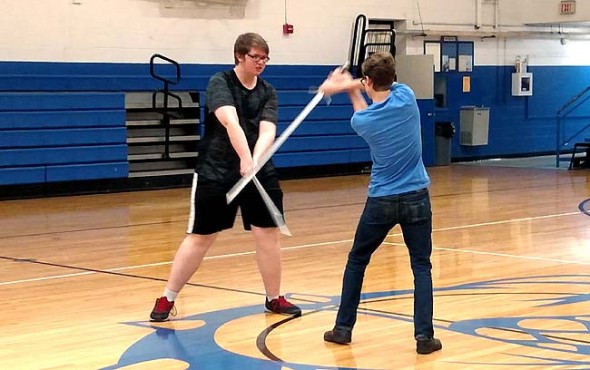 Duard Headley (Macbeth) and Nicolas “Bear” Wright (Macduff) vie for the throne in YSHS’s production of “Macbeth.” The actors engaged in professional stage combat training and Shakespeare reading workshops to immerse themselves more fully in the performance. “‘Macbeth’ is not meant to be read; it’s meant to be played,” said the play’s director Lorrie Sparrow-Knapp. ‘The Scottish play’ opens Oct. 30 at 8 p.m. at Mills Lawn Elementary School gym. (Photo by Dylan Taylor-Lehman)

Shakespeare: perhaps one of the best-known people in human history and certainly the best-known playwright in the history of human expression. His work is powerful, revered; the lessons it teaches are valuable to humans of any epoch. Immersion in a Shakespearean production is a powerful, complex experience for everyone involved, and this is why Lorrie Sparrow-Knapp feels so passionately about bringing “Macbeth” to Yellow Springs High School: it’s not just theater, it’s a chance to learn about language, cooperation, and sword-fighting.

“Macbeth,” known as the bloodiest of Shakespeare plays, will be performed by YSHS students for their fall theater production. The play is helmed by Sparrow-Knapp, director of the Yellow Springs Theater Company, and takes place in a future Scotland that has seceded from the UK by popular referendum. Approximately 30 YSHS students are involved with the production, from 22 actors to eight set and lighting designers. Kayla Graham is the assistant director, and Ara Beal is producing.

“Macbeth” was written around the end of the 16th century and is based on real events. The play documents attempts to seize the Scottish throne by a general named Macbeth. He believes he is ordained to ascend the throne after one of three prophecies by three witches appears to come true. Conflicting interpretations of prophecy, competition for the throne, and a swirling confluence of dark designs result in painful lessons of greed and conscience. There are witches and ghosts, which makes the play especially appropriate for its Halloween showing.

Historically, the production of “Macbeth” is said to be haunted, Sparrow-Knapp said, or at least characterized by superstition. In 1849, a fight broke between an American and an Englishman over who was the better Shakespeare actor that resulted in a huge Manhattan-wide riot, according to background information accompanying a 2013 Broadway performance of the play. “Macbeth” is commonly referred to as “the Scottish play,” as speaking the title of the play aloud is taboo in a theater.

Fortunately, the YSHS production of the Scottish play hasn’t been beset by any curses. The only trial is the hard work that goes into performing one of Shakespeare’s works in its entirety. The actors’ rehearsal schedule has been intense, Sparrow-Knapp said: four days a week for a few hours each day. Shakespeare presents a challenge to actors of any level, but the challenge of performing his work is part of the reason to do it, she said.

Part of Sparrow-Knapp’s aim as director is to give students an extremely in-depth theater experience. As a professionally trained actor herself, she understands how transformative theater can be to an individual. Imparting an understanding of the Bard is one part of it, but she also made a point to involve the students in all aspects of the play’s production, from fight choreography to building puppets out of papier mâché.

One of the first things Sparrow-Knapp did with students was to sit them down and teach them how to read the Shakespearean verse. Professional actors learn Shakespeare completely differently from how it’s read in school, she said. The nuances and beauty of the florid language come across much clearer when a reader knows how to follow the ebb and flow of the words.

To that end, Junior Duard Headley said that tackling the project was a huge but rewarding undertaking. He has acted before but his role as the eponymous King is his first lead role. The role has been extremely challenging, but he found that putting himself in Macbeth’s place and thinking like the character makes him more relatable, or at least more understood, and this has made learning the role a little less daunting.

“It’s been far more exciting than intimidating,” he said.

Sparrow-Knapp brought in a pair of fight choreographers to teach students armed and unarmed combat techniques for the stage. Neil Massey, who is certified by the Society of American Fight Directors, and Rachel Stubbs made students’ dreams come true by leading a workshop on how to punch and roll and wield aluminum weapons such as maces and axes and broadswords.

While there are a number of murders in the play — the poster bears a warning that it might not be suitable for children — the emphasis on learning how to fight properly is all part of the immersive experience. The physical training also furthers Sparrow-Knapp’s desire that students see the artistry of the battle choreography and stunt work appearing in cultural phenomena like the television show “The Walking Dead.”

The engaging nature of the material and Sparrow-Knapp’s direction was evident at a recent rehearsal. Stage Manager and senior Ailish Price maintains that while she is a “terrible actress,” being stage manager is a way for her to be close to the stage without having to be on it. She said her love of the theater is such because theater is the artistic form of empathy.

“You need almost nothing to put on a show — all you need is people,” she said, noting the strength of the connection that is created between actors, emotions and audience. And so for students to play such integral roles in staging the play makes the experience that much more personal, to say nothing of the quality of the show the audience will then experience.

Just how professionally students were doing their jobs was demonstrated by Gabe Trillana, a YSHS senior who is in charge of lighting, came up to Sparrow-Knapp and said like a true professional, “Lorrie, we need to talk about the size of the stage.” Trillana mentioned this was his 22nd production as light designer.

Sparrow-Knapp said that in addition to internalizing the play’s grave lessons on human frailty, students will have a great résumé when they finish the production. They’ll have a Shakespeare credit, they’ll have folio training, and they’ll have done fights with Neil Murray, she said.

But more importantly, they’ll walk away with a deeper appreciation for Shakespeare. “He is current, his words are alive, these plays mean something and have lasted 400 years for a real concrete reason,” she said. “And if you show them that hidden thing inside Shakespeare, they’ll never be able to unsee it for the rest of their lives. Some things are important — Shakespeare is important.”