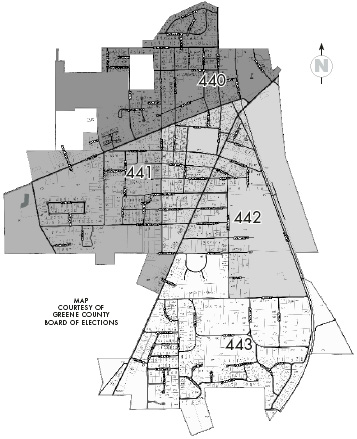 While the unofficial results of the 2015 election did not specify the percentage of voters who particpated by press time, the total number of people who voted from Yellow Springs was 1,803, and those from Miami Township numbered 573.

MacQueen was the top vote-getter, with 1,115 votes, or just over 29 percent of voters. Hempfling and Simms came within a few votes of each other, 973 and 961, respectively, winning 25.6 percent and 25.3 percent of votes. As the top two vote-getters, MacQueen and Hempfling each win four-year terms. Simms wins a two-year term.

In addition, 75 voters, or just under 2 percent, wrote in a candidate.

During the James A. McKee-sponsored Candidates’ Night in late October, MacQueen spoke out against Yellow Springs’ participation in the Greene County ACE Task Force and in favor of community policing. Hempfling presented similar views. Simms, by contrast, indicated his support for a continued Yellow Springs police presence on ACE. Economic development was another issue that separated MacQueen and Hempfling, on the one hand, from Simms.
Hempfling championed a revived Antioch College as the cornerstone of economic development in the village, while MacQueen highlighted the role of a revived Economic Development Commission. Both emphasized a more grassroots approach to economic development, capitalizing on the assets already within the village. Simms, by contrast, expressed disappointment in the voter rejection of CBE last year, and guarded views about the village’s ability, absent CBE, to attract and retain new small-to-medium-sized businesses.
At that same forum, MacQueen and Hempfling signaled their strong support for environmental issues, including preserving green space around the village. Hempfling said she supported improving affordability, including working to repeal the landlord utility policy enacted by Council last year.

In a close race for the full four-year term as Miami Township trustee, longtime incumbent Chris Mucher reclaimed his seat, just 143 votes ahead of challenger Don Hollister, while Zoe Van Eaton-Meister trailed. Mucher captured 891 votes, or 44 percent, to Hollister’s 748 votes, or 37 percent of the village and township electorate. Van Eaton-Meister had 365 votes, or 18 percent.

For the unexpired term, Lamar Spracklen won his bid to complete the two years remaining in the term he was appointed to fill when Trustee John Eastman died last year. Spracklen swept up 1,042 votes, or 65 percent, while challenger and township resident Dale Amstutz lagged with 573 votes.

Mucher, a village resident, has been a Township trustee since 1996. Spracklen, a local farmer, has served on the board for 15 years.
Miami Township fiscal officer Margaret Silliman was also reelected to her fifth four-year term.

Yellow Springs voters resoundingly approved the proposed amendments to the Village Charter on Nov. 3, voting 81 percent to 19 percent in favor of the Charter changes.

The Charter amendments were prompted by last year’s voter referendum on the Center for Business and Education, Council member Brian Housh said in a recent interview. The Village Charter had outlined a different process for voter referendum (as well as the related mechanism of voter recall) than that specified by Ohio state law, said Housh, and the resulting “unnecessary complication” led to a review of the Village Charter as a whole.
Charter amendments fell into three categories: conformance changes to bring the Charter in line with Ohio state law; language/typographical clarifications; and substantive changes that will alter the application of the Charter. Voters were presented with all changes as a single issue on the ballot.

If the Charter amendments hadn’t passed, individual changes would have been put on the ballot in May, said Housh, given the need to bring the Village Charter into conformance with state law. But that scenario was avoided by Tuesday’s vote.

Substantive changes include beginning the terms of newly elected Council members on Jan. 1 after certification of the election; mandating that an elected official is not eligible for the job of Village manager until two years after leaving office; allowing publication of public notices in electronic format as an alternative to the printed newspaper of record; eliminating the residency requirement for Village manager, who must reside within Greene County or any county contiguous to it; removing the 10-day period between reading and enactment of the budget ordinance; and eliminating the requirement that one member of the Planning Commission be a resident of Miami Township outside of the village.

Ohio citizens were lit up about this year’s issues on marijuana legalization, and while voters around Ohio and in Greene County both returned a deafening “no” to Issue 3 to legalize the regulated growth and use of marijuana, Yellow Springers felt very differently. While around Ohio and in Greene County and Miami Township, precisely two thirds of voters rejected marijuana legalization, a majority of villagers, or 56 percent, approved the measure. Marijuana got 953 village votes, while another 734 villagers voted against it. Meanwhile, Miami Township voted with the rest of Ohio with 351 votes, or 64 percent of the elctorate, against the measure and 201 votes, or 36 percent, for it.

Issue 3 was a constitutional amendment initiated by Ohio citizens to allow for limited growth, sale and posssession of marijuana for those over 21 (and medical marijuana for persons of any age with certification). The limits placed on the industry included 10 predetermined grow sites with named investors and no more than 1,100 retail outlets, as well as limited personal cultivation and possession.

While voters were more mixed about state Issue 2 to regulate citizen-initiated amendments to prevent monopolies, statewide and across Greene County, a narrow majority of voters cast votes of approval. However, in Yellow Springs and Miami Township, opinion again was the opposite. In the village, 61 percent, or 1,290 voters, voted for and 39 percent, or 825 voters, voted against the amendment.

Issue 2 proposed to discourage future citizen-initiated amendments to the state constitution that provided a monopoly or commercial advantage to a particular business or industry. It also sought to establish a board to evaluate whether future proposed amendments would violate the existing state constitution and force voters to first decide whether they wanted to violate the constitution and then vote on the issue itself. Issue 2 was create by the state legislature specifically to oppose Issue 3.

Finally, a point of agreement, everyone everywhere, including the Yellow Springs outliers, shouted yes to Issue 1 to reform the legislative redistricting process. Issue 1, a state constitutional amendment, proposed to make the process by which electoral districts are created more reflective of state partisanship and less vulnerable to political gerrymandering. In both the village and Miami Township 1,929 residents voted for and 245 voted against the issue.

Voters helped to seat those running unopposed for seats on Yellow Springs School Board, Village Mayor and Miami Township fiscal officer. In uncontested races for school board, incumbents Sean Creighton and Sylvia Ellison were reelected to four-year terms, Creighton’s third and Ellison’s second. Ellison received 1,242 votes and Creighton, 1,196.
Village Mayor David Foubert also reclaimed his seat as Village Mayor with 1,268 votes. He has been the mayor since 1991.

Margaret Silliman was also returned to her position as Miami Township fiscal officer with 1,540 votes.

Greene County voters came out in support of county parks, bridges and public health on Nov. 3, passing all three county levies on the ballot. The new levy, issue 18, which raises funds for the Greene County Park District, just barely squeaked through. Fewer than 1,000 votes separated “yes” from “no” on issue 18, which ended up passing 51 percent to 49 percent.

Among Yellow Springs voters, however, the parks levy passed by a huge margin, with 80 to 85 percent in all village precincts voting in support of the levy. Miami Township voters, by contrast, were split by geography: precinct 455, in the east, actually narrowly voted against the levy, while precinct 456, in the west, voted solidly in favor of it.

The parks levy will cost homeowners $31.50 each year per $100,000 of assessed property tax value, and will generate $3.3 million for county parks and trails. This revenue will partially offset cuts in state funding in recent years, according to the Greene County Park District website.

While issue 18 was a new levy, the other two county levies on the ballot, issues 17 and 19, were both renewal levies. Two-thirds of Greene County voters approved issue 17, which renews funding for the construction, reconstruction, resurfacing, repair and removal of Greene County bridges. Yellow Springs voters were even more decisive in their support: between 80 and 90 percent of voters in all village precincts approved the renewal. Miami Township voters were more in line with county voters overall.