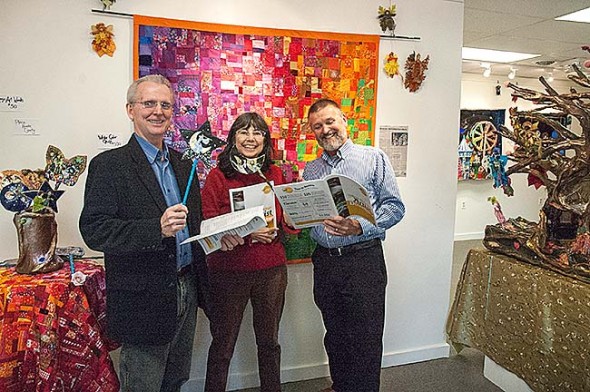 Yellow Springs Arts Council launched Art Roulette this week, a campaign to raise $30,000 by matching donors with “creative sparks” to artists who will make those ideas come alive. From left, YSAC board member Timothy Barhorst, gallery coordinator Nancy Mellon and President Jerome Borchers (with art by Sharri Phillips) are among the campaign organizers. (Photo by Audrey Hackett)

YSAC is betting on the creativity of both local artists and other village folk who might have a “creative spark” but lack the time or artistic skill to turn inspiration into artwork. This week, the local arts nonprofit is launching Art Roulette, a fundraising campaign that aims to bring in $30,000 while catalyzing dozens of new creations and collaborations around the village.

Twenty percent of funds raised will pay participating artists; 80 percent will go toward the local arts nonprofit’s operatiing costs, which total between $30,000 and $36,000 annually, according to YSAC President Jerome Borchers.

YSAC has been seeking new ways to cover its basic costs in recent years, said Borchers. Previous operations support from the Morgan Family Foundation disappeared in 2012, when the fund decided to support the rebirth of Antioch College with a major gift and suspend funding to YSAC and other local nonprofits. The Morgan fund announced another major five-year gift earlier this year, along with a continued suspension of other local funding. In previous interviews, Borchers said he understood and embraced the Morgan fund’s decision to prioritize the college. But he also acknowledged last week that YSAC is still facing a funding gap.

“We haven’t found any new sources for operating expenses,” he said. Grant-making organizations typically offer project and program support, not funding for day-to-day operations, he explained.

Right now, YSAC is supported by a combination of membership fees, revenue from annual events (such as the Art Jumble and Art House-Hop), individual donations and modest grant funding, according to Borchers. Membership has become a sustaining part of the budget, he said, with a couple hundred members generating $12,000 to $14,000 each year. And while this and other sources have kept the nonprofit going, Borchers and fellow board members are seeking greater year-after-year stability for the organization.

“Our goal is sustainability,” he said.

Enter Art Roulette. The idea behind the campaign is to bring together donors and artists, but in a way that’s fresh and full of surprise for both parties, said Borchers. By donating at one of several suggested levels, donors secure a collaboration with a local artist chosen at random (by a metaphorical “spin of the wheel”) within the donor’s designated genre from YSAC’s 2015 Artist Directory, a compilation of over 250 artists working in Yellow Springs. (The directory itself is a new YSAC project, brought to fruition last year by 2014 Antioch College Miller Fellow Alexandra Scott.)

Artists may opt not to take part, in which case another artist is chosen at random. Once a match is made, said Borchers, it’s up to the donor and artist to take the collaboration as far as it can go. The donor brings the spark of inspiration; the artist brings the technical skill and creative experience to carry it out — perhaps adding in unexpected ways to the original idea, he said. And because YSAC takes the broadest possible view of the arts, disciplines include body art, culinary arts, wellness arts and landscaping, as well as more traditional artistic genres.

Local restaurants and coffeehouses are supporting the effort by donating coffee and snacks to donor-artist pairings who choose to meet in person, he added.

“I love the element of surprise,” said Nancy Mellon, YSAC gallery coordinator and a local visual artist. “As a donor, you could get an artist who really runs with an idea and takes it in directions you never imagined.”

YSAC board member John Booth, a performance poet, musician and visual artist, has firsthand experience with this type of unorthodox collaboration. As a performance poet, he and fellow poets once raised funds for a trip to a national competition by having audience members commission ideas.

“It got me into doing a whole different type of piece,” he said. “It raised the money we needed and the people who commissioned the work really enjoyed it. They were part of the creative process — they had ownership in it.”

Noting that “art has been commissioned forever,” Borchers said he was excited that the campaign gave a new twist to “how art has been produced for a long time.”

However, he was quick to point out that donors do not “own” the artwork at the end of the collaboration. Rather, donors get the chance to participate in the artmaking process and, as Mellon said, claim “bragging rights” about having had the “bright idea” that sparked a piece of art. Donors who wish to more concretely possess the product of their collaboration (which might be a painting, ceramic piece, poem, dance or even culinary creation) can bid on the work at the YSAC gala, which will be held sometime next year.

“I’m really excited about the gala,” said YSAC board member Valerie Blackwell-Truitt, a longtime local dancer and dance troupe leader who is currently the founder/director of the Bej Na Dance Company. “I can’t wait to see the back end of this — when all the commissioned work is brought together and put on display.”

All board members said they were excited that the campaign, while raising critically needed funds for YSAC, also creates new opportunities for artists to be paid.

“We have a lot of quality artists who don’t make much money as artists,” noted Booth. He said he was pleased that Art Roulette will raise funds for artists in such a direct way. In addition to receiving 20 percent of the donated amount, artists will collect a percentage, still to be determined, of the auction value of their art.

“This could be the bump an artist needs to work at something really hard and gain new exposure in the community,” said Borchers.

And he’s hoping the campaign will also be the “bump” the community needs to deepen its commitment to its local artists and to YSAC.

“This campaign will probably help determine what role the Arts Council will play in Yellow Springs,” he said. “The level of participation will be a guide to what we can do.”

The organization began 64 years ago (as the Yellow Springs Art Association) with a focus on the visual arts, but a process of redefinition in 2008 broadened the nonprofit’s scope to embrace many different disciplines, as well as an array of roles within the local arts scene.

Some of those things are visible (and audible), such as the nonprofit’s Corry Street gallery space, which hosts changing monthly exhibits by artists at “all levels of experience” and monthly Arts Alive! performances. Borchers also pointed to special projects such as the “very successful” Fence Gallery, which brought together artists and local business donors to beautify the perimeter of the Mills Park Hotel site during the early phases of construction, as well as the upcoming “Locked In” collaboration among three artists creating an installation in the gallery. (That project also relies on elements of surprise and chance, he said, and was a creative success when it debuted last year.)

YSAC supports local arts and artists in “behind the scenes” ways, too. Borchers said it provides liability insurance through its policy to cover performances by local groups that may not have insurance, and serves as the fiscal sponsor to receive and disburse funds on behalf of smaller organizations that don’t have tax-exempt status. Now that the Foundry Theater is back in operation, YSAC maintains an office there to coordinate local groups’ use of the facility. It’s also helping to promote new festivals, such as the Cyclops Fest, by providing organizational and marketing expertise, according to Borchers.

And the arts nonprofit is increasingly positioning itself as an organizer and “anchor” for community-wide collaborations, he said, pointing to YSAC’s pivotal role in the 2013 National Bronze Sculpture Symposium.

Robust community participation in Arts Roulette will help YSAC continue all these projects, and expand into further areas, Borchers said. If this year’s campaign succeeds, board members envision making it an annual event. Of course, like any new idea, Art Roulette is a gamble.

“Our hope is that we have enough people who feel we’re making a difference for art in Yellow Springs,” he said.