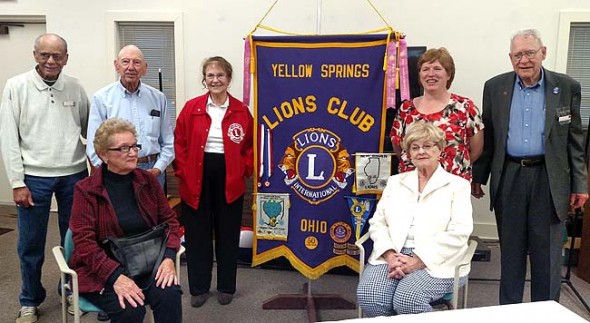 Members of the Yellow Springs Lions Club pose for a photo at the group’s farewell gala at the Senior Center on Nov. 4. The group is disbanding after 64 years of service to the community. The Lions’ activities included everything from repaving YSHS tennis courts to activities benefiting eyesight-related causes. “The whole concept is that we serve,” said Yellow Springs Lion Griff Johnson. “Any money we made was put right back out into the community.” (photo by Dylan Taylor-Lehman)

Lions chapter comes to a close

How to measure the amount of good accomplished through decades of public service? In the case of the Yellow Springs Lions Club, one could consider the thousands of eyeglasses the group has donated during its 64-year existence. But glasses are only a small part of the Lions Club’s largesse — the group has also provided audio/visual screening equipment to local schools, given money to the food pantry and orchestrated the Fourth of July fireworks display.

“The whole concept is that we serve. That’s our motto,” said Yellow Springs Lion Griff Johnson, who joined the chapter in 1973. “We never earned any money — any money we made was put right back out into the community.”

As of this fall, however, someone else will have to pick up where the YS Lions are leaving off. Dwindling membership and the increasing age of its current members lead to the group’s decision to disband, said Carol Gasho, the group’s secretary/treasurer and a member since 1999. As membership declined, so did the ability to mount service projects to the scale that the YS Lions wanted.

“It is a bit of a sad farewell, but one that we saw coming,” Gasho said.

Lions Club members and their families met at the Senior Center on Nov. 4 to celebrate the group and bid it farewell. They shared coffee and cake and swapped recollections of their adventures. Scrapbooks and memorabilia and a copy of the group’s original charter — signed by its 29 founding members in 1951 — were on display for the 25 attendees to peruse.

“It’s been a great run for the Yellow Springs Lions. They’ve done a lot of great things for the community,” said Gasho.

The chapter has given to the Glen, the Police Fund, paved the tennis court at the high school and twice put some “big money” into the high school’s track over the years, Gasho said. The Lions maintained the holiday flags displayed up and down Yellow Springs streets numerous times throughout the year, she said.

The Lions were also involved with summer camps for disabled children, providing scholarships for children so they could attend camp and serving meals and cleaning at Camp Dovetail, a camp for children who need a 24/7 caregiver, said Yellow Springs resident Maria Varandani, who joined in 1990. Local members had a presence in larger Lions circles, as Varandani and old President Hans Giga served as officers in the state Lions.

However, a pet cause of local and international Lions is eyesight. Service work for the blind or visually impaired is priority for the Lions, Gasho said, whether it be projects in support of eye research, guide dogs or now diabetes research, because diabetes and eyesight go together.

“It all comes back to, you want people to become more independent,” she said.
Lions chapters are the groups behind the boxes for donated glasses that one sees in stores or on counters. The glasses collected by the Yellow Springs chapter are taken to the Ohio State University, where optometry students analyze them and tag them with their respective prescriptions, said Varandani. The glasses are then sent to countries where populations may not have easy access to eye care, and are given away for free, she said.

The local Lions stayed busy with their projects but had a lot of fun in the process. When the YS Lions collaborated with other area Lions Club on a project, good-natured mischief would result, Johnson said. Visiting Lions would be put on the spot and quizzed about obscure Lions trivia, said Johnson, and if you didn’t know the answer, you’d be fined 25 cents. Groups had a little bank so if you did something bad at the meeting, you’d put money in it, he said. But YS Lions could give as good as they got: sometimes when visiting other clubs they’d swipe the club’s gavel or the bell that starts the meeting and ransom it back to the group, he said with a laugh. (Officer titles on the 1951 charter included “Lion Tamer” and “Tail Twister.”)

Hyde said his reasons for joining included the opportunity to meet with people concerned about the town and eyesight, and to participate with them on worthy causes. The dwindling membership is a sign of the times, he said, when one’s sense of responsibility to the community manifests itself in different ways, if it still exists at all. When the club was founded in 1951, it was customary for people to join a civic group, he said, but people don’t join groups anymore. It’s a trend that affects not only the Lions Club but other civic clubs and even churches as well, Hyde said.

The Yellow Springs chapter was down to nine members, Johnson said, down from a peak membership of over 30 members. Current members served multiple terms as officers of various kinds, and had to take on too many duties when a project was undertaken, said Gasho. The enthusiasm of younger generations to join a civic club just isn’t there, she said, and so they decided to call it a day.

Members of the group discussed their post-Lions plans at last week’s farewell gala. Gasho and her husband love to travel and will be taking advantage of their open schedules to travel more, she said. Johnson was a little less certain about his plans; that the Yellow Springs Lions Club — his club for 42 years — was disbanding was shocking enough, so he hadn’t yet determined what would come next. Varandani was quick to say that she will be joining another area Lion’s Club and told Johnson it would be great for them to go together.

“You know you could ride with me. I hate driving alone!” Varandani said.

Johnson nodded, a little hesitant, and he looked over her shoulder at the scrapbooks lying open on the table, the scrapbooks that exhibit the good done by him and his friends, and that chronicle the years that have passed in the process.