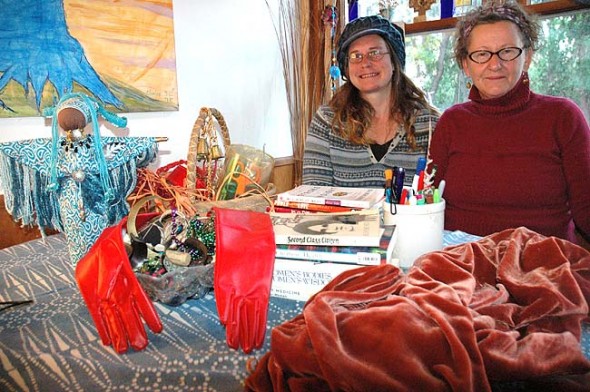 Lara Bauer, left, and Cathy Paige are inviting women to explore the emotions of guilt, shame and resentment through twice-monthly workshops involving the creation of wearable art. The next workshop will be held on Sunday, Nov. 29, from 2 to 4 p.m. The workshops will continue through December, January and February, and will culminate in a fashion show displaying particpants’ pieces: the Cloak of Guilt, Mask of Resentment and Gloves of Shame. (photo by Diane Chiddister)

Turning shame and guilt into art

Many of us, and especially women, are told by our families, or perhaps the culture at large, that we need to hide these difficult emotions, tamp them down, keep them from others’ awareness. If we talk about feeling guilt or shame, we might make other people uncomfortable, and as women, we need to take care of others, not cause them discomfort.

That, at least, is the cultural paradigm that many females grow up believing, according to two local women. But Cathy Paige and Lara Bauer want to turn that paradigm on its head, and invite women to join them in a public exploration of emotions that most, if not all, of us feel, yet too often deny or ignore.

“I don’t see exploring resentment, guilt and shame as negative,” Paige said in a recent interview. “We’re complex beings. Through exploring these emotions we gain some understanding of our lives as women.”

That exploration will take place during The Fashion Show, a women’s art and wellness project sponsored by the Yellow Springs Arts Council. The project begins this month with twice-monthly workshops, and will culminate in an actual fashion show during which participants will wear the wearable art they’ve created: the Cloak of Guilt, Mask of Resentment and Gloves of Shame. The fashion show will take place during the March 2016 Women’s Voices Out Loud (although women may participate in the fashion show in ways other than wearing their creations).

While the workshops officially began last Sunday, Nov. 15, Paige and Bauer encourage other interested women to take part in the second one, on Nov. 29 from 2 to 4 p.m., at 144 Limestone Street. The workshops will continue throughout December, January and February.

The process will begin with women sharing their stories of guilt, shame and resentment, according to Paige. And while each woman has a unique story, there will also be commonalities. The process is powerful because talking together is the opposite of the secretiveness and isolation that often surrounds these emotions.

“These are emotions we all experience to some extent,” Paige said. “And in telling our stories, we discover connections.”

The workshops will also include shared reading material on the effects of emotions on physical health, including resources such as Women’s Bodies, Women’s Wisdom, by Christine Northup. Participants will be encouraged to keep a journal of their feelings and responses during the workshop, and will also be introduced to slow-flow yoga as taught by Carmen Milano.

A private Facebook page, created by Bauer, will also be a part of the workshop. Participants will be encouraged to connect with each other between meetings, and organizers especially hope that women share the tools they use to help healing. A wellness consumer advocate, Paige has no doubt that buried emotions can have a negative effect on women’s health.

“Shame and resentment have an impact on our bodies,” she said.

Later in the process, participants will take part in a maskmaking workshop with local artist Margrit Petrie, and also create their own pieces of wearable art from materials provided, or their own contributions of clothing or accessories. However, there is no cost to the workshop or for materials; organizers hope to receive funding from the Yellow Springs Human Relations Commission, or HRC. And no sewing experience is necessary; duct tape is considered a reasonable tool for creating costumes, Paige said.

An important aspect of the project is the temporary aspect of putting on a piece of wearable art that represents shame, guilt or resentment, and then removing it, according to Paige.

“We’ll be putting on pieces that we can then take off,” she said. “We’re naming the emotions, looking at them and then we can remove them and see the wholeness beneath.”

And while the emotions are dark ones, participants will be invited to approach the topic with humor or playfulness if they want.

“You can have a little bit of fun with this,” she said.

The concept of exploring with other women the feelings of shame, guilt and resentment came to Paige years ago, when she saw the film, “The Hours,” based on the life of writer Virginia Woolf, who ended her own life after decades of inner turmoil and shame.

“I’ve been thinking about the struggle to live an authentic life as a woman, and the price paid for it,” Paige said. “It takes courage. You’re going to get battered.”

The focus on cultural expectations of women and the resulting difficult emotions resonated with Bauer because of the legacy of resentment in her own family, she said. Her grandmother, a talented artist, had no way to pursue her artistic gift due to limited choices for women at the time. Instead of being an artist, her grandmother married and raised seven children.

“She was doing what she had to do, but she resented the role,” Bauer said, stating that that resentment affected her grandmother’s children and grandchildren as well.

Bauer and Paige are excited to be offering women a safe place to explore emotions that too often lead to isolation and loneliness. They invite any interested women to take part.

“This is for a woman who feels this resonates with her and is willing to dive in and explore these emotions and share her experience,” Paige said.