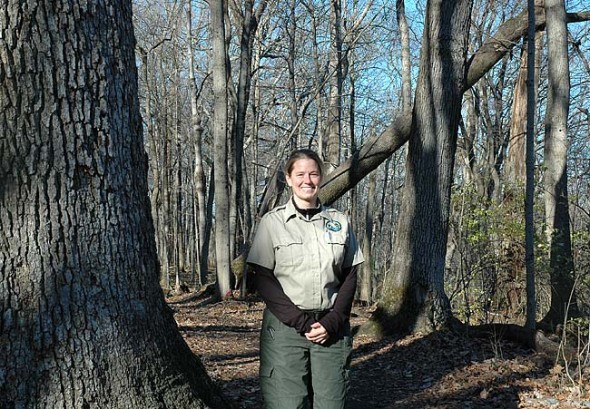 Susan Smith is Glen Helen’s full-time ranger. Her daily routine entails the work of a peace officer, ecologist, guide and land steward, and her background makes her especially suited to the job. The Glen has always been a special place to her, she said, so despite the occasional trouble she has to attend to, the chance to be a ranger in a place so personally meaningful is a rewarding and emotional opportunity. (Photo by Dylan Taylor-Lehman)

A lone ranger for Glen Helen

The quiet hum of natural life is a powerful force, said George Bieri, the Glen’s land manager, and the Glen offers many people the opportunity to immerse themselves in the solace it affords.

But on the other hand, Bieri said, people can become easily overwhelmed by the outside world. The feeling of smallness can be especially pronounced when out in the quiet woods and under a big sky, he said, which makes people feel like they have to yell or act up to compensate for their relative powerlessness in the universe. The response to such an existential crisis is often to re-dominate nature so one feels in control: visitors rip up cages protecting plants, rearrange trail stones, and dam up creeks, he said. Whether acts of serious vandalism or kids-will-be-kids mischief, such misconduct can be distracting to the Glen’s visitors and distressing in a place that many feel is a kind of sanctuary.

Thus the complicated role of Glen Helen’s lone ranger: how do you impart an appreciation for the wonders of nature while chastising someone for being uncool? Susan Smith has been Glen Helen’s first fulltime ranger since July of this year, and her daily routine includes the work of a peace officer, ecologist, guide and land steward. And despite the occasional trouble she has to attend to, she said her job is one of those rare opportunities to immerse herself in a profession so personally satisfying.

As Bieri mentioned, words like “sanctuary” are often used when talking about the Glen. From an ecological standpoint, the sense of sanctuary is fostered by the Glen’s unmolested natural state; a habitat full of native plants and animals, and one that tells the fascinating story of Ohio geology, Smith said. The Glen is not a state park whose lands are designed for human use but a domain whose existence benefits from minimal human impact.

Therefore, it the responsibility of the Glen’s stewards when the disparate elements are “out of whack,” said Bieri. The Glen — like much of Ohio — has an overwhelming deer population. Coupled with the proliferation of invasive species, the area runs the risk of being overrun by intruders. The idea is to maintain a state of natural balance for visitors and for the plants and animals of the Glen, Bieri said, which is why instances of petty vandalism are discouraging: the more time that is spent scrubbing graffiti, the less time can be spent on stewardship. The ranger provides a pair of boots on the ground that shows the Glen is a real place looked after by real people who truly care about it.

The Glen has over 100,000 visitors per year, but only a small fraction of these visitors come with ill-intentions, said Smith. She has lain in wait for would-be revelers who think they can party in the Glen without censure, but her primary duties aren’t punitive. Guests appreciate someone who can answer their questions, she said, or enhance their visit by teaching them a little bit about their surroundings. In fact, showing just how fascinating the natural world can be is key to refocusing the sometimes destructive energy of visitors. Instilling a sense of deference cuts down on the need for policing by showing that the Glen can be enjoyed on its own terms, she said.

Or at least that’s the hope: sometimes talking about the dangers of erosion or respecting the families of mallards isn’t enough to deter people from swimming in the blue hole on hot summer days, but Smith’s background makes her uniquely suited to contend with all manner of chicanery. (Other troubles include onslaughts of mushroom hunters, people filming vampire movies and use of the majestic Cascades as a backdrop for nude photo shoots.)

Smith grew up in Michigan but moved to the area as a young teenager. The Glen has always been a special place to her, she said, a place where she could hike with her dogs, take runs, or simply indulge her “deep passion and love for nature,” especially its herbaceous plants and wildflowers. Her love of nature and the need to be outdoors made her realize that she was interested in becoming a park ranger, but she also realized that there weren’t many opportunities to be a ranger in the area.

However, she reckoned that police work was a close enough field and could help her with her eventual ranger plans. She went through the police academy and joined the Clark County Sheriff’s Office in 1997, where she worked for a year. It was a complex time for Smith because she wasn’t necessarily among like-minded people, she said, but there were elements of her job that did appeal to her. Her training in conflict resolution and building people skills proved very helpful to her as a ranger, she said, to say nothing of how the training magnified the capacities of her already tough comportment. On a recent walk around the Glen, for example, she walked surefooted over slippery obstacles to speak with a family taking photos off trail, leaving this reporter a few feet behind her. She let the family finish their photo op and gently explained to them why they should stay on the trails; the family was apologetic and everyone left with a sense of understanding.

Ultimately Smith quit the sheriff’s office and moved to Frisco, Colorado, where, among constant hiking and kayaking, she took wilderness first responder classes and found her interest in being a ranger was reignited. The interest stuck with her, so after coming back from her exodus out West in early 2011, she began working part-time at the Glen. She became the fulltime ranger in July 2015, thanks in part to the funding that purchased the easement now protecting the Glen.

While being the Glen’s ranger has its good and bad days like any job, it’s a job that she nonetheless wakes up excited to do and an opportunity she is grateful to have.

“It feels good dedicating my time here, and I’m willing to work hard to maintain the Glen,” she said. The feeling is mutual: “I feel fortunate when you find an employee that you want to fight to keep,” said Nick Boutis, the Glen’s Ecology Institute director, of Smith.

On the recent walk through the Glen, Smith stopped at the top of a cliff overlooking Birch Creek. It was a scene of classic beauty, one whose dance of sunlight on water and vivid green moss has the ability to transcend human experience. Smith spoke of incredible insects she’s seen — the hickory horned devil and saddleback caterpillars — and the way the Glen looks in the moonlight. The Glen is breathtaking and inherently powerful, she said.

“The people, the plants and the animals are all equal in Glen Helen,” she said. “We’re guests in nature. The purpose of this place is to protect every single thing in here.”