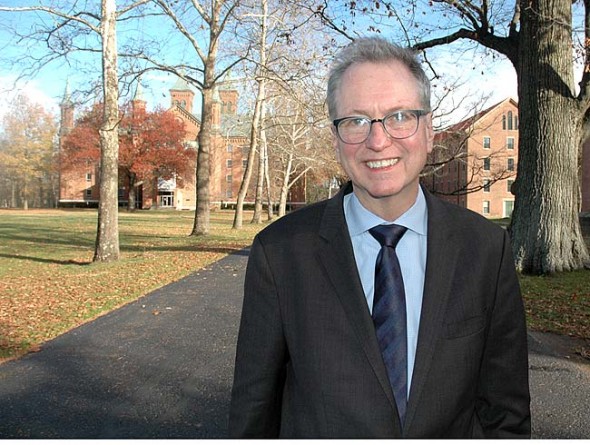 Thomas Manley spent a few days on the Antioch College campus last week after being announced as the second president of the revived college on Wednesday, Nov. 18. Manley will begin his tenure in March, 2016. He comes to Antioch from Pacific Northwest College of Art in Portland, where he’s served as president since 2003, revitalizing and transforming the college. (Photo by Audrey Hackett)

Antioch College’s next president, Thomas Manley, has a quiet, even gentle voice. He’s not afraid of the thoughtful pause, both before and after speaking. He weighs his words like the student of poetry that he is — Kenneth Rexroth is a particular love.

“I like poetry because of its concentrated impact and power,” he said in an interview last Friday, two days after Antioch announced his hiring. “It’s like those secret ingredients that chefs have, a powder or a salt. It’s catalytic.”

Not surprisingly, he’s also a lover of food; he calls himself a “seagan,” a “mostly vegan” who can’t give up sushi.

Manley will become the second president of the revived Antioch on March 1, 2016. Mark Roosevelt steps down next month, at the end of his five-year contract. Andi Adkins, vice president for finance and operations, will serve as interim president beginning on January 1.

“Mark has laid the foundation,” said Malte von Matthiessen, chair of Antioch’s 21-member presidential search committee and an alumnus and a trustee of the college, commenting on Manley’s selection last week. “Tom can build on that to help position Antioch to be something different.”

The refounded college has been stabilized, but significant challenges remain. “The challenges are big,” Manley acknowledged. “But the promise is 10 times bigger. This is what I’ve been waiting for.”

Even expressing such confidence, there’s an inwardness to Manley’s demeanor that’s more poet than public figure. He mulls as he talks. He’s witty, yet radiates calm.

But make no mistake. His track record is bold, and past successes suggest he’s amply up to the Antioch challenge.

In 2003, he assumed the presidency of the Pacific Northwest College of Art, or PNCA, in Portland at a critical juncture in the small art college’s history. In the Portland press, he is widely credited with transforming the struggling school into a nationally ranked institution and a major player in the city’s flourishing creative economy.

Keys to that transformation, according to a 2009 profile of Manley in The Oregonian, include saving the college from a loss of accreditation, boosting enrollment, reshaping the undergraduate curriculum and adding a raft of graduate programs, building partnerships with diverse city organizations and purchasing and rehabbing several historic buildings to give the college a permanent physical home. The flagship building of the new campus, a former Portland post office, opened last spring after a $34 million renovation, according to a PNCA press release.

Prior to orchestrating PNCA’s turnaround, Manley spent 22 years in faculty and administrative posts at the Claremont Colleges in southern California, mainly Pitzer, a small liberal arts college. There, he was instrumental in developing the college’s study abroad programs, now nationally renowned.

The move from Pitzer to PNCA was surprising, to Manley himself most of all. “I’ve not pursued a career agenda — none of the moves I’ve made have been predictable, at least not to me,” he said.

The move to Antioch is another surprise. One of Manley’s colleagues, an Antioch alumnus, brought his name to the presidential search committee over the summer. Manley said he knew something of the college, but was astounded to read the 23-page search description — and not just because of its length. (“It’s got to be the longest in the history of colleges,” he said, admiringly.) It outlined a commitment to transforming the liberal arts — certainly at Antioch, and perhaps across the landscape of other educational institutions, as well.

Search committee chair von Matthiessen characterized that transformation as an embrace of “applied liberal arts.” He pointed to the college’s long history of social justice commitments and its cooperative education program as examples of practically grounded, socially engaged forms of liberal arts learning.

The search committee was “very open and frank” about the challenges Antioch faces, Manley said. Six months ago, the accreditation process would have topped that list, he said, but with the November site visit completed, accreditation is a priority rather than a push. The college expects a decision in June, 2016, according to Matt Desjardins, Antioch’s communications director.

The college is confronting a host of short-term financial issues, he said. Finances are not a new area of difficulty for the college, Manley acknowledged, which underscores the need to “create a different approach that frees the college from some of that.” Resilience and planning are essential, he said.

“We can’t rely on a series of magic bullets or life-saving donations,” Manley contended.

Manley was low key about his prior accomplishments, including substantial fundraising successes, emphasizing the unique demands of the job ahead. “Every place is different,” he said. “I really need to not be prescriptive.”

Still, a few glimpses of how he might proceed emerged during last Friday’s conversation. By temperament, he seems to be a collaborator and conciliator. “You build momentum by restoring credibility, if it’s suffered, and trust, if it’s been broken. You make commitments, then keep them,” he said.

The relationship between Antioch and the larger community is critical, he said. He envisions collaborations and “diverse partnerships” between the college and village, and an orientation to working together that “builds on successes and, where necessary, ‘fails better.’”

Antioch’s co-op program resonates deeply with his own experience, he said. As a student, he studied abroad in Japan in the early 1970s, then spent time there in the late 1970s and early 80s doing doctoral work. He was a visiting scholar in 1985–86, and later helped write the curriculum for an American-style liberal arts college. Though his visits these days are less frequent, Japan remains a profound influence, he said.

During his years at Pitzer, Manley personally debriefed almost 1,000 students about their overseas experiences. “Not a single student came back regretting the undertaking,” he said. “It was the most life-changing educational opportunity they’d ever had.”

He’s convinced that experiential education uniquely equips students for intellectual and personal growth.
“Through my experience at Pitzer, I came to believe that the act of doing things — not just talking or reading about them, but doing them — was incredibly powerful,” he said. For young people especially, “it’s a platform for personal transformation.”

The challenge for Antioch, he added, is to “figure out the best way to weave those experiences into a really rigorous classroom- and research-based liberal arts learning environment.”

Walking around Antioch last Friday, Manley professed delight to be back on a liberal arts campus after 12 years in a more narrowly focused art school milieu. “It was exhilarating to stand outside a chemistry lab again,” he said. Still, “PNCA was a joy,” and its imprint is strong. Consistent with his orientation toward experiential education, he promised to advocate for “studio-based programs” across the range of disciplines at Antioch.

And he vowed not to enter his new job “trying to throw touchdown passes.” Then he laughed and said, “Maybe you shouldn’t print that. I told the staff today that I would be eschewing sports metaphors.”

But in the days following the official announcement of Manley’s presidency, touchdown analogies seemed apt. Von Matthiessen’s exuberance and relief last week were obvious. “The process worked,” he said. “This person is absolutely the right person at this time to lead us into the future.”

Manley and his wife, Susanne Hashim, a development consultant, plan to move to Yellow Springs from Portland in the spring with their 10-year-old daughter, Chedin. (Manley also has an adult son, Dashiell, and two adult stepchildren, Karina and Johan. All three are in artistic fields, he said.) The couple were here for several days last week familiarizing themselves with the campus and community. And they “snuck in” to the village back in September, Manley said, even before he was a finalist for the job.

“We’ve eaten two good meals at The Winds,” he said. They took approving note of the wine and coffee shops along Xenia Avenue, reassured that the village “has its priorities straight.” Spending time on the campus and driving around Yellow Springs’ neighborhoods confirmed their comfort here.