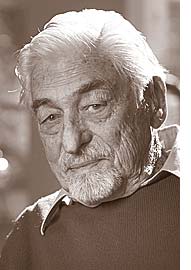 Dr. Arthur Lewis Solomon, 97, a former college professor, actor and poet, died in his home in Federal Way, Wash., on Nov. 23, 2015. He is survived by his loving companion, Evelyn Gibb; his two siblings Lola Stone (98) and Richard Solomon (91); his three children David, Jonathan and Roslyn; eight grandchildren and five great-grandchildren.

Dr. Solomon was born on Oct. 1, 1918, in New York City. He attended Antioch College in Yellow Springs. While at Antioch, he met fellow student H. Anne Golub, whom he married in 1943. They had four children. He was active in the theater at Antioch, playing in productions of Shakespeare and other classics.

During WWII, he was a lieutenant in the U.S. Merchant Marines. He was involved with the supply of military material in the Atlantic until the end of the war. After the war, Dr. Solomon attended the University of North Carolina and completed a master’s degree in theater arts in 1947.

After receiving his master’s, he worked as a professional actor off-Broadway, and toured the country with the Margaret Webster Shakespeare Company. In the early 1950s, Dr. Solomon left his professional acting career to pursue a Ph.D. in speech pathology at Stanford University (1960).

Dr. Solomon taught at California State University in Chico, Calif., Antioch College and Western Washington University in Bellingham, Wash. He retired in 1987. Before and after his retirement, he led tours to Stratford-upon-Avon, England, that included Royal Shakespeare Company productions.

He took up backpacking and fly fishing while living in California — interests that he continued to enjoy throughout his long life. He never quite understood how catch-and-release replaced the catch-and-fry-up-in-a-pan of those early years. After retiring, Dr. Solomon lived in Hawaii, Santa Fe and Washington state. At the age of 83, he established a happy relationship with Evelyn Gibb, his partner until his death.

Publications: “The Staging of Hamlet and Elizabethan Stage Conventions (1947);” “Emotional and Behavior Problems of First Grade School Children with Functional Defects of Articulation,” “Child Development”(1961); “The Student as Speaker and Listener,” The Antioch Conference on Communication Skills and Interpersonal Relationships (1966); “Interpersonal Communication: A Cross-Disciplinary Approach (1970);” “Preparing a Poem for Oral Reading,” “Highway One” (1983); “Poetry as Alchemy, Gleanings from My Life” (2009).

A haiku from his book of poems, “Poetry as Alchemy”:

When man is gone
only the stars will remain
nameless as before.