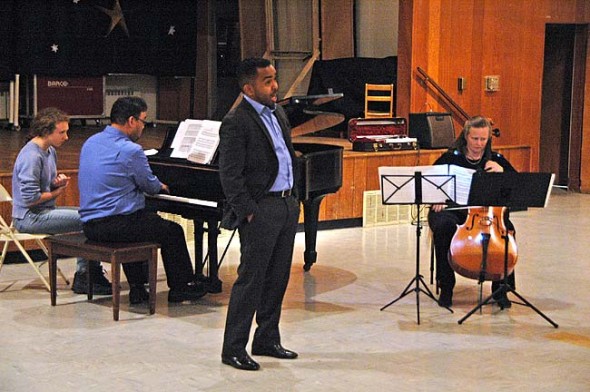 Founded in 1981 by two members of the local Quaker meeting, the camp has maintained its connection to Yellow Springs, including a winter benefit concert held here each year in the week between Christmas and New Year’s. The annual concert features performances by some of the professional musicians who serve as camp teachers and counselors as well as former and current campers, many with ties to Yellow Springs.

This year’s concert is set for 7:30 p.m. Monday, Dec. 28, at Antioch College’s Foundry Theater, a new venue for the event.

“We’re really pleased to be at the Foundry,” said Peg Champney, one of the camp’s co-founders and directors and its undisputed matriarch. Besides the accommodating performance setting, the theater has a grand piano on site, fulfilling multiple needs, Champney said.

“As usual, a great variety of genres” will be featured in the evening program, she said. And a variety of instrumentations will be represented as well, ranging from vocal selections to string ensembles to woodwinds to a bass trombone.

The eclectic nature of the evening’s program reflects the camp’s openness to musical diversity and exploration. In addition to more conventional camp offerings of band, orchestra and jazz and chamber ensembles, recent years have seen campers and staff pursuing old-time and bluegrass as well as street band traditions.

A number of the musicians planning to take part in this year’s winter concert have local ties, Champney said. Martin Bakari, a Yellow Springs High School graduate who earned a master’s in vocal performance from Juilliard and has served on the camp staff for the past three years, will be returning to his hometown, as will New York-based multi-instrumentalist Martha Hyde, Switzerland-based violist Wendy Champney-Enderle and Vermont-based Heidi Champney.

Former campers, of whom tenor Bakari can also be counted, will include YSHS alum Joshua Seitz on clarinet. Current campers will be represented by Sean McDonald, who will perform on bass trombone, and guitarist Blaze Wright.

Hyde, who has taught at the camp every summer since 2002 as well as a number of years in the 1980s, said she has been coming back to Yellow Springs for the winter concert since it began “over 10 years” ago as a gathering in the Vale, where the Champney family home is located. Besides an opportunity to raise money for the camp’s scholarship fund, the concert “has become a mini reunion” of past and present staff and campers, she said.

Hyde is preparing to perform in several pieces for this year’s program: on clarinet in a movement of Johann Nepomuk Hummel’s clarinet quartet; flute in Heitor Villa-Lobos’ Jet Whistle, a duet with cello; oboe in a Ralph Vaughan Williams setting of a William Blake poem, featuring Bakari on vocals; and four of seven African love songs composed by Samuel Coleridge-Taylor to poetry by Paul Laurence Dunbar, with piano and cello and featuring soprano Minnita Daniel-Cox. Daniel-Cox, who is on the vocal faculty at the University of Dayton, is also a past instructor at FMC.

Hyde, who also performs and tours with two other camp teachers as the New River Ensemble, said the trio will perform the entire Coleridge-Taylor song cycle with Daniel-Cox at the University of Dayton on Feb. 6.

The opportunity for professional growth is one of the reasons Hyde said she returns to Friends Music Camp each summer. In addition to collaborative opportunities with her colleagues and students, she said it offers her a “safe place” to try new instruments, premiere new compositions and arrange works for a variety of groupings.

“I get to stretch myself, push my own envelope, she said. “I love teaching. … I find it endlessly fascinating. … Music is one of those incredibly complex things. It seems that it uses the entire human brain, and to watch young people develop all of that is incredible.”

With a personal camp history that goes back to the 1980s, Hyde is now teaching the children of former campers as well as working and performing side-by-side with past students.

“It’s multigenerational,” she said. “It’s fantastic. One of my favorite things is to work with campers and for them to come back several years later as colleagues.”

She said she believes those kinds of connections will continue as Friends Music Camp looks toward a new chapter in its history. After 35 summers settled in the campus of Olney Friends School in Barnesville, Ohio, Friends Music Camp is moving in 2016 to Earlham College.

Hyde said she expects that some camp dynamics will shift with the move.

“My family just moved from one house to another, and the dynamic changed,” she said. “But I have a lot of faith that we will be able to take the things that matter — community and fairness, sharing and friendship. That goes with the people. And there will be a conscious effort to do that.”

The move was considered deeply and by all involved, including the campers themselves, before the board made its decision. Cost concerns and keeping attendance affordable prompted the early discussions. The facilities at Earlham, where a new creative arts building with state-of-the art performing and practice spaces opened last year, offered a promising setting, Champney said.

“We’re looking forward to creating a sense of community there that’s been such a part of FMC,” she said.

Open to students ages 10–18 who have had at least one year of instrumental lessons or school band, orchestra or choir experience, the 2016 edition of Friends Music Camp is scheduled July 10–Aug. 7, with a two-week option for 10–12 year olds. Cost this year is $2,655 for the full four weeks and $1,895 for the two-week stay. The suggested $15 admission cost for the Dec. 28 concert will go to support the camp’s scholarship fund. “Our attempt is to make it possible for anyone who would like to go to camp, to be able,” Champney said.