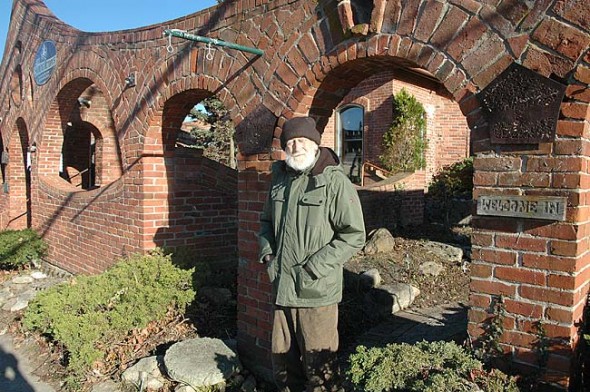 Longtime local artist Alan Macbeth was honored on Saturday with the Village Inspiration & Design Award, or VIDA, presented by the Arts and Culture Commission. Macbeth was recognized for his ongoing work on the unique Oten Gallery, which was described as a Yellow Springs “icon.” Macbeth has worked on the brick structure for almost 50 years. (photo by Diane Chiddister)

Alan Macbeth was studying art at Ohio State University in the 1960s when he decided to drop out of school and move to Yellow Springs. A little house right downtown on Xenia Avenue was for rent, and he moved in. Later, his mother bought the house for him.

The town has been lucky as well. For the past 40-some years, Macbeth has aimed his considerable artistic talent at that house, turning an ordinary home into the Oten Gallery, a stone and brick fantasy structure at 309 Xenia Ave. that was described recently as “an icon of Yellow Springs.”

Macbeth was honored at a reception last Saturday, Nov. 21, with the VIDA award, presented by the Yellow Springs Arts and Cultural Commission. The award, which stands for the Village Inspiration & Design Award, recognizes those who have made significant design contributions to Yellow Springs.

“There’s no more fitting person than Alan to receive this,” Jamie Sharp, chair of the commission, said at the reception, which was attended by about 25 local artists and villagers.

Not surprisingly, the construction of the Oten Gallery itself, with its curving archways, openings, walkways and patios, was a serendipitous process. It began when Macbeth set out to improve the house, to make it his own, after receiving it as a gift.

“You know how sometimes you get a gift and then you do something to destroy it and how bad it feels?” he said in an interview this week. “I didn’t want to feel that way.”

First, Macbeth built a wooden fence in back, to separate the space from neighbors. He used a curving design for the top of the fence, and liked the look.

“The curve gave a motion to it, made it more dynamic,” he said.

He also filled in the front and back yard, making a terrace and gardens. And he worked hard to turn a dank basement into a living space, blasting through layers of bedrock that left him with an abundant supply of stones, which captured his fancy. The stones ended up in various designs throughout the building.

At about this time, his friend Russell Jones, local “mason par excellence,” at the time, asked if he wanted the bricks from a house Jones was tearing down on the corner of E. Enon Road and Dayton Street.

“I said ‘I’d love to have some bricks,’” Macbeth said on Saturday. “Then I had to figure out what to do with them.”
Macbeth decided to see if he could repeat the curving motif of his back fence with bricks, and he set out to build the front wall. From there on, though, it’s hard to say what came next.

“I’d start something and not finish it, then start something else,” he said. “I was always surrounded by problems.”
In an interview with the Yellow Springs News in the 1980s, Macbeth said he’d been working on the building for about 20 years and was about halfway done.

Then about 15 years ago a fire gutted much of the structure. While the fire was a discouraging setback, Macbeth doubled down to recreate his artistic structure. And with the insurance settlement, he was able to add on, building a second story apartment and an addition out back.

It hasn’t always been easy finagling a path through local zoning codes, according to Macbeth, but he found friends in the process. When he had to go to the BZA, or Board of Zoning Appeals, to put a roof on the south side addition, BZA member Wilbur Deaton stated at the meeting, “I don’t see any reason why Alan can’t have this roof,” and the others fell into line, according to Macbeth.

The unique structure has attracted local entrepreneurs, and has housed “about five or six restaurants,” according to Macbeth, including Iko’s Harmony Cafe, Meskie Brown’s Ethiopian restaurant and the current Aleta’s Cafe. It’s also been the home of various art galleries and currently houses the Smoking Octopus, a smoke shop.

Along with honoring Macbeth’s unique Oten Gallery, those attending the reception honored Macbeth as an artist and human being.

Describing Macbeth as a friend to local artists, including herself, Sharon Mohler said he is “a lot better artist than most people realize,” pointing out his evocative portraits and figurative studies lining the restaurant walls, some of villagers past and present. Longtime villager Cecil Cook described Macbeth as a “guru,” citing his sometimes crusty demeanor.

“Gurus slap you around every so often,” Cook said. “He speaks truth to me in harsh ways that I need to hear.”

And Brenda Goff, who has known Macbeth since the mid 1970s, described how he made beautiful functional objects as well as painting portraits and creating the Oten Gallery.

“His utilitarian objects are as interesting as his art,” she said.

Macbeth is only the second recipient of the VIDA prize, a new honor created by the Arts and Cultural Commission and presented quarterly. The award is recognized with a traveling metal sculpture in the shape of a Y created by local sculptor Jon Hudson, which is now sitting in front of the Oten Gallery, and will remain there for three months, until the next winner is announced. Previously, Tim and Kelley Callahan won the prize for the stone sculptures in their front yard. Anyone can make recommendations for the VIDA award, and Macbeth was recommended by Yellow Springs Village Council member Marianne MacQueen.