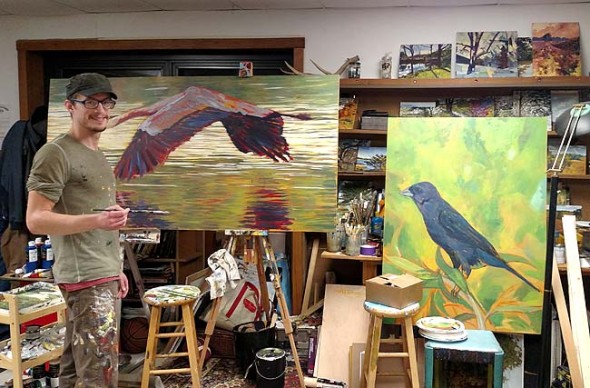 Travis Tarbox Hotaling worked in his studio on a painting of a heron for his upcoming show “Birding is Hard,” which will open at the Yellow Springs Brewery on Nov. 25, with a reception on Saturday, Nov. 28, from 3–5 p.m. His oversized paintings are a nod to the “involved and elusive” practice of birding while portraying the complex and fascinating personalities of his subjects. (Photo by Dylan Taylor-Lehman)

Painter Travis Tarbox Hotaling— Visions of birds at the Brewery

The idea of an exhibit entirely of bird paintings came up by chance, said Travis Tarbox Hotaling, a painter and Yellow Springs resident. His large painting of a Kirtland’s warbler at last summer’s fence gallery around the Mills Park Hotel site drew positive feedback: the painting of a bird alight on a branch amidst the bustle of downtown resonated with passersby, prompting someone to suggest that he do series of paintings in the same vein. Then, an invitation to take the spot of a canceled show at the Brewery pushed him to get the series together.

His upcoming show is aptly titled “Birding is Hard,” and will feature seven or eight of Hotaling’s oversized bird paintings. Hotaling’s work will hang in the Yellow Springs Brewery from Nov. 25 to Dec. 20, with an opening reception Saturday, Nov. 28, from 3–5 p.m.

The show’s title is accurate and to the point, he said, because birding is a “really involved and elusive practice.” The patience and extreme observational skills necessary to birdwatch are aspects that make the pastime so tough but also so rewarding.

“I’m inspired and impressed by those who are able to do it,” he said. “‘Birding is Hard’ expresses a dual appreciation for birders and birds themselves.”

Hence the bit of humor in the scale of the paintings, he said. The giant paintings — some of the birds are a few feet across — are a nod to the difficulty of seeing tiny creatures flitting by in surroundings that easily hide them.

The bird paintings are elegant, expressive and captivating for the same reason: birds are a perennial symbol for the artist and the dreamer, he said. The freedom of flight, the poetry of their motion — the ability to escape speaks to that amorphous human yearning that could be satisfied if one could just fly away.

Hotaling’s interest in painting birds was in part inspired by how the paint left by a dropped brush makes a perfect feather. That the dance of brushstrokes mirrors feather and flight makes birds a natural subject for painting, and the private lives of birds make them especially interesting, including their adaptations for feeding and their rituals to attract mates. Birds reflect what you value in life — a bird can be a symbol for what you find important, he said.

“Everybody loves birds,” he said, “I only have one friend who hates them.”

And as if to make this point a little more personal, most of the birds in his upcoming exhibit can be found in Ohio.

“These amazing creatures are all around us. One of the purposes of the show is to try to make people more aware of the birds around them, to be in awe and not take them for granted,” he said.

Hotaling is a landscape painter, and attributes his interest in the medium to the influence of his grandmother, the late Billie Hotaling, who would often be outside painting with watercolors when he’d arrive for a visit. But putting together eight paintings of birds for the upcoming show allowed him time to work with materials and techniques different from those employed in his other work.

The focus on one dynamic subject — a bird in this case — requires a different approach than painting a landscape. The bird paintings are acrylic and flatly rendered, in contrast to his landscape paintings, which are created with oil and built up on the canvas, he said. The bird paintings are huge but depict something very small, where the landscapes are small but try to depict a larger space. The challenge of painting a bird is to transmit the many aspects of its personality through one image, where as landscape painting requires the painter to determine which of many beautiful things he wants to paint, he said.

Hotaling has completed eight pieces for the show. One piece — a Tundra swan in flight — took Hotaling around 50 hours to complete, and more work could be done if he had more time, he said. (This is relatively short amount of time to complete a piece — he said he wants to do a painting that would take at least a year of study and preparation to complete.) Painting is time consuming in and of itself, but so is the legwork that goes into preparations for a show. He primes and sands the boards he paints on, and sometimes has to tailor pieces to hang in each gallery. He also markets his work and prepares the remarks he sometimes gives at openings.

Despite the significant amount of work and concentration that goes into his craft (and the subsequent feelings inspired in viewers), the work of an artist isn’t totally understood, if judging by the comments people make when Hotaling says he’s a painter.

“So many people tell me I’ll have to die if I want to sell my art,” he said, as if art can’t possibly have any value unless it’s sold at Sotheby’s for millions of dollars.

“I don’t think it’s given the support in society in the way it should, but there will always be a place for artists,” Hotaling said. “Art is such a common, human activity — art came before agriculture in human history, which says a lot for the value of expression and the value of seeing something expressed.”

Despite the appraisals of unappreciative wags, Hotaling says he’s lucky to be able to paint and teach painting as a living. He likes the solitude of his craft but also the ability to share it with other people, he said, and it’s certainly worth the hustle, even if the fact that he’s alive supposedly decreases the value of his paintings.

“I’m not a starving artist,” he said, “just slightly underfed.”