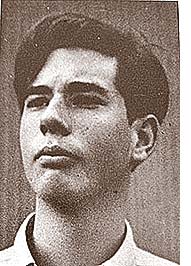 Patrick Condon, 1966 graduate of Yellow Spring High School and lawyer, passed away on Sept. 30, 2015, in Carlsbad, Calif., where he lived for the past few decades.

He grew up in Yellow Springs and in Goes. His father worked at the base and his mother, Mary, was a long time third-grade teacher at Mills Lawn. He was raised Catholic, but did not attend parochial schools. He always knew God, but never let dogma rule his faith. He was living in the Bay Area when his father died, and his mother moved in with him. He suffered from emphysema and an inherited disorder that required a double lung transplant in 2011.

As a boy, Patrick was always a voracious reader. The classics, philosophy, history, poetry and art: knowledge itself fascinated him from an early age. Growing up, Patrick’s bedroom was lined with full bookshelves, a typing table, a neatly made bed, classic art posters and a Turkish carpet on the floor. He always dressed well. He had a close group of brainy friends and spent much time with them. In high school he was a ringleader of the Funky Club, and served as Grand Fubaugh. He was influenced by Glenn Owen’s humanities course. It was as if he was in graduate school his whole childhood!

He earned a Bachelor of Arts from Kalamazoo College in Michigan and studied for a Ph.D. at UCSD but, in typical Patrick fashion, left his dissertation on a train and lost all that work in English and Irish literature towards his doctorate. However, he remained expert in those fields and went on to Bolt Law School at UC Berkeley. He passed the bar in California and after clerking, began to practice appellate law in the North County. He always tried to apply his skill as a lawyer to cases in aid of the poor and downtrodden. He helped a lot of people who would never have received justice without him.

He loved pets, travel with the family and visits to his 92-year-old grandmother. Like many native Yellow Springers, he enjoyed striking up conversations with almost anyone; for example, one time when his friend picked him up at the airport, Patrick asked if they could give a lift home to his friend, Mohammad, who sat next to him on the plane. (Also an example of how we like dopey stories.)

He is survived by his companion, Cori, and his brother, Chris, and Sheri Condon who live in Maryland with their three children. There was a celebration of life ceremony at North Coast Calvary Chapel in Carlsbad, Calif., on Tuesday, Oct. 27.