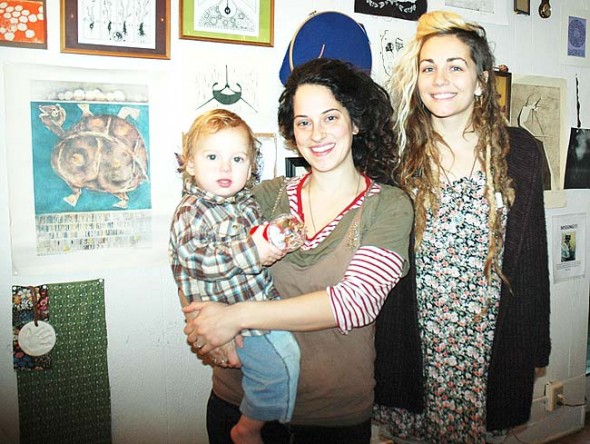 Villagers Ash Dasuqi (with son, Holden) and Pamela Williams will be heading to El Paso, Texas, next month to enroll in Maternidad La Luz, a midwifery school and holistic birthing clinic there. To raise funds for their immersive year of midwifery training, the two women have organized an Adult Spelling Bee, which will be held on Sunday, Jan. 10, at 6 p.m. at the Emporium. (Photo by Audrey Hackett)

A benefit bee for midwives-to-be

Two friends from Yellow Springs are answering a call to midwifery — and hoping for helping hands to aid the work of their own.

Pamela Williams and Ash Dasuqi will head to El Paso, Texas, in February to begin an immersive year at Maternidad La Luz, or MLL, a midwifery school that operates an affordable, holistic birthing clinic for women on both sides of the border. Williams, who is fluent in Spanish and has been “looking for a meaningful way” to use the language, learned about the program from villager Abby Cobb. Dasuqi, meanwhile, knew a midwife trained at MLL and already felt drawn to the vocation. The friends resolved to enter the program together.

“Doing this together — that feels very right,” said Dasuqi.

Williams, who has lived in the village since 2014, is a trained doula, or birth assistant, in addition to her “day job” working with George Bieri in Glen Helen. (She is also the partner of Dylan Taylor-Lehman, a reporter at the News.) Dasuqi, who has lived in the area for about 10 years, is a nurse; she and her partner, David Flowers, have a young son. Both women are passionate about birth work — the umbrella term for the range of practices, some of them as old as birth itself, that support and empower women in the act of bringing new life into the world.

“Pregnancy and birth are places for a woman to find her strength and power,” said Dasuqi in an interview last week. “This is such an important rite of passage. For it to be as medicalized as it is really takes away what the experience can mean for women.”

This Sunday, Jan. 10, villagers can help Williams and Dasuqi raise funds for the year ahead, find out more about birth work and — wait for it — enjoy a rather unusual event: an Adult Spelling Bee. From 6 to 9:30 p.m. at the Emporium, skillful spellers in teams of three will be reeling off words from a list Dasuqi is building, using a book promisingly titled “2,000 Most Challenging and Obscure Words.” Less skillful spellers can watch the pub-style contest, learn a new word or three and take part in other aspects of the event: a cash beer and wine tasting, a 50/50 cash raffle and bidding on gift certificates and items from local people and businesses.

“This is a chance to get those words right that you got lost to in middle school,” said Dasqui, who revealed that her waterloo word was “abscess.” (“And I became a nurse!” she added.) Williams said she’d always loved spelling. “I was in the ‘gifted spelling group’ in school,” she said modestly.

The suggested donation to attend the Adult Spelling Bee is $10–15; those wishing to take part as spellers are asked to donate $20–30, and should contact Williams or Dasuqi before Sunday to register. Those unable to attend but wishing to learn more or offer support are also invited to contact them.

“There’s a community of women behind us saying, ‘Do this, we want to support you,’” said Williams. “People here want to help and have been so supportive.” She was reluctant at first to ask for financial help, she said.

“But sometimes it’s a gift to let other people help you.”

One of those people is Kateri Kosta, assistant director of communications at Antioch College. A self-described “co-collaborator” in shaping Sunday’s fundraiser, Kosta said this week that while she could offer Williams and Dasuqi, both friends of hers, modest financial support, she is gratified to be providing the deeper gift of her time and event-planning expertise.

“I thoroughly support the idea of women making new choices and, in particular, pursuing education and their passions, as Ash and Pamela are doing,” Kosta said.

While Williams and Dasuqi have been “saving vigorously,” both women said last week that they recognize they still need more financial help. At friends’ urging, Williams established a page on GoFundMe, an online fundraising platform, about six months ago. Through her site, http://www.GoFundMe.com/PamelaWilliams, she set a goal of $10,000 (about 60 percent of the estimated cost of tuition and a year’s living expenses) and has raised about $3,300.

Williams said she’s deeply grateful for the online support from friends and family.

“But I’m happy to be doing something in real life that connects me to people,” she added.
That’s one way to express the essence of the work she and Dasuqi hope to do at MLL and in their future lives as midwives.

“I think it’s really important for the next generation to be born in a way that’s connected with their mothers. That connection provides the psychological foundation for the child,” said Dasuqi.

She reflected on her own birthing experience 18 months ago. “I was surprised by how inward and meditative it was,” she said. “I had a pretty strong realization that this was something I needed to do for myself.” Supporting that realization is — perhaps counterintuitively — one form of assistance that a birth worker can provide to a birthing woman.

Her son, Holden, now 18 months, “came out screaming in the morning after a long thundery night,” Dasuqi recalled. Williams served as a doula at his birth. Distinct from a midwife, who is trained in delivery, a doula typically provides emotional and practical support to pregnant and birthing women.

“A doula is more hands-on, while a midwife is hands-in,” Williams explained. She moved to Yellow Springs, from Michigan, to help Dasuqi with Holden’s birth, and ended up staying. A job in the Glen as “the main chainsaw person” doing habitat restoration and a growing love for village life kept her here.

For Williams, birth work is about encouraging women to “feel their feelings to the deepest, especially within such a spiritual and emotional journey as childbearing.” She is an “auntie” to her three sisters’ children, and has observed how birth experiences, positive and negative, shape mothers, children and the relationship that grows between them.

“Birth work isn’t just about delivering babies,” Williams said. “I want to be a healer as well.”
The MLL program will allow the women to assist at 100 births, a far greater number than other kinds of programs, according to Dasuqi. Hands-on (and hands-in) work staffing the program’s clinic for low-income, mostly Spanish-speaking women is a centerpiece of the learning-as-service the school provides, she explained. But both women see a long path of apprenticeship ahead, perhaps including work together.

Dasuqi said she and her partner would like to eventually return to Yellow Springs. “I love this place,” she said.

Though a much newer resident, Williams said she might return to the village, too.
“There is such a supportive community of women here. If I had a child of my own, this is a place I would definitely consider coming back to.”