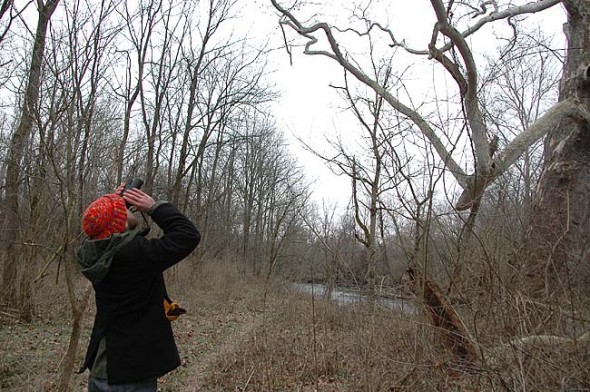 Your mission? Count every bird

It sounded like an impossible task: count every bird in Glen Helen and beyond. Birds like the tiny golden-crowned kinglet, barely bigger than a hummingbird, and the great blue heron, a solitary dweller in the area’s streams and ponds.

But on Sunday, Jan. 3, at 8 a.m., a band of birders gathered at the Glen to undertake to count, as fully as possible, all the birds seen and heard within a count circle that stretched 15 miles in diameter, just north of Yellow Springs to Xenia, and included the Glen, John Bryan Park and Clifton Gorge.

“We’re here to count every bird we can find within that circle,” the Glen’s director, Nick Boutis, organizer of the count and one of the counters, told the group. Later he acknowledged that total accuracy was neither possible nor a realistic goal.

“But taken as a whole over time, these numbers start to build weightiness,” he said.

This is the sixth year that the Glen and local birders have participated in a continent-wide early winter bird census known as the Christmas Bird Count. (There is a precursor to this participation: for several years in the 1930s, one birder maintained a narrower count circle, centered on Yellow Springs, said Boutis.) The data gathered by Yellow Springers ensures that our year-round avian residents, as well as birds that overwinter here or migrate through this time of year, are included in the massive tally of North American birds.

Boutis provides our local data to the National Audubon Society, which oversees the count and compiles massive data sets that are used, according to the Audubon website, to guide preservation efforts. Birds are “indicator” species, the website explains, and so population data collected over time also helps scientists measure overall environmental health.

On a continent level, one of the trends over the past 40 years, for example, is a movement of bird species northward and inland. In response to climate change, bird populations in this period have moved an average of 35 miles northward, according to the Audubon website.

It’s too early in our local count to assess long-term shifts in this region. Still, a few changes are apparent, said Boutis. Sandhill cranes have begun to show up in the count; Boutis said area birders have been seeing these huge migrators in our skies only in the past 10 years. Bald eagles are another newcomer, their numbers on the rise thanks to conservation efforts in Ohio, though only one has been recorded in the local count so far.

The wider Christmas Bird Count is 116 years old this year. In 1900, according to the Audubon website, Frank Chapman, an early Audubon officer, proposed it as an alternative to traditional bird-shooting contests known as “Side Hunts,” which once were popular on Christmas Day.

“Birding as a hobby originally involved the shooting and collecting of birds,” Boutis, a 25-year veteran birder, reflected on Sunday. “It’s hard to imagine that as part of our history.”

Chapman’s first count evolved into today’s massive effort, the largest and oldest citizen science endeavor in the world, according to the Audubon website. The bird census runs annually across North America from Dec. 14 to Jan. 5; all data must be gathered on a day during that time, when many birds are still migrating. The Audubon website indicates that 64.9 million birds were tallied during a recent (2012) count, representing about 2,400 species — a quarter of all bird species. An estimated 60,000 people from the Americas participated that year.

Ready, set, count
Here in Yellow Springs, eight birders and one wannabe (this reporter) took part in Sunday’s count. Participants included villagers Gabe Amrhein, a new but serious birder, and veterans Boutis, Gretchen and Ken Beers and Keith and Elaine Kresge, as well as expert birder Rick Asamoto, from Miamisburg. Jeff Jerome joined the group from Northampton, Mass. He was new to winter bird counts but not to the Glen, he said, having been a naturalist intern in 1972.

Meanwhile, according to Boutis, two area scientists were collecting data elsewhere in Greene County. Cris Barnett, chief naturalist at Greene County Parks and Trails, was counting calls in the county’s parks, while Jim Amon, professor emeritus of biology at Wright State, was watching for wings in the Beavercreek wetlands.

The count circle was divided up into smaller territories, which the assembled birders claimed based on interest and experience. Ken Beers quipped it was great birding weather “because it’s not raining.” Others laughed knowingly. With a few “good lucks,” the group dispersed, mostly in twos.

This reporter tagged along with Amrhein, who grew up in Yellow Springs and attended the revived Antioch College for a couple of years as a literature major. He and his partner moved to St. Louis for a while, he said, and had recently moved back to the village. Somewhere in the midst of these migrations, Amrhein discovered a love for birds.

“My grandmother had given me a bird book when I was a kid, and it sat on my shelf for a long time,” he said on Sunday. But he always loved the outdoors, he added, and birding is a natural outgrowth of that love.

“One of the things I didn’t expect was how much more I notice as a birder,” he reflected. “When I would go on a hike before, I might notice one or two or three cool things. Now, I see so many more tiny details. You can go on the same hike a dozen times and it’s always different.”

A careful lap around Ellis Pond revealed a cedar waxwing and a pair of downy woodpeckers, among other birds. Amrhein listened carefully near a stand of pines — good places to find smaller birds in winter, he said, because of the shelter and food the trees provide. A woodpecker was calling, but which one?

“The hairy woodpecker has a louder, more metallic call,” Amrhein said. Plus, it’s rarer than the downy woodpecker, which it closely resembles. “That’s a downy,” he confirmed, and made a note. Asked how he know the calls were from just one bird, he said, “My guess is it’s just one because the calls aren’t overlapping.” And then they did. “Two birds!” he said, revising his note.

All participating birders were supplied with tally sheets listing the species commonly or occasionally spotted in our area in wintertime. Counters note the number of individuals seen or heard within each species. There’s also room to write in species rarely seen in our region, as once was the case with migrating sandhill cranes.

To shave a little time off a busy morning, Amrhein drove by Dewine Pond (two mallards) and continued on to the Glass Farm wetlands. The contrast to Ellis Pond was immediately apparent. The Glass Farm area is much more sheltered; brush and high stands of weeds provide perfect cover for sparrows and other small birds, said Amrhein.
“Two of them, three of them, four, five, six,” he murmured, counting tree sparrows. A song sparrow was also heard. And the “tiny, slightly drawn-out call” of an unseen bird? “Goldfinch,” Amrhein said.

Springing over some rocks to get to the little network of trails beyond the wetlands, he described how he’d just come back from his first “bigger chase,” outside Akron, in search of the brambling, a small rusty-breasted Eurasian bird in the finch family.

“They occasionally stray as far south as Alaska,” he said. But two bramblings have been spotted near Akron in the past 28 years, according to area newspaper accounts. He saw one — “the rarest bird I’ve seen”—and swapped accounts with Gretchen and Ken Beers, who also traveled north to, as Gretchen Beers said, “get the bird.”

Amrhein counted 11 species at Glass Farm, including a flock of European starlings on King Street that he estimated at 80 birds. It was hard to tally that pandemonium of wings, but this reporter came up with about the same number.
Amrhein continued onto the South Glen, “my usual haunt” for birding. “It’s easily my favorite part of the Glen,” he said. Walking along the Little Miami River’s sycamore-lined banks, he paused. “Hear that little laugh across the river?” It was a red-bellied woodpecker, he said, one of five woodpecker species he’d end up identifying on Sunday.
Birders have all kinds of tricks for identifying and remembering bird calls, he explained. “People think the Carolina wren sounds like it’s saying, ‘Cheeseburger, cheeseburger,’” he said. But he has his own mnemonic. “I don’t know why, but I hear, ‘Germany, Germany,’ ” he laughed.

A “Kyear, kyear” in the woods was a red-shouldered hawk, he said. And the chittering in the distance? The unmistakable call of the kingfisher. A particular thrill to this observer was the grey hunch of a great blue heron across the Little Miami — not an uncommon sight in local watery and marshy places, but always startling.

Amrhein said he birdwatches “about every other day.” Birding doesn’t need to involve counting, he added, or even binoculars. “It’s really about being aware of birds.”

Now back in Yellow Springs, he’s planning to finish his degree in environmental science (at Antioch College or Wittenberg University), and go on to get a master’s in ornithology. In the meantime, he’ll be volunteering with Brian Kot, biology professor at Antioch, to help clean up and retag the college’s collection of bird and other animal specimens.

Walking back to the car after about three hours of counting, Amrhein said the morning’s birding had been “not bad for winter.” He’d identified 28 species in the South Glen alone, and 34 overall; he’d counted 525 individual birds. Had the weather been a little colder (it was cold enough, though, for bare hands gripping pens), the count would have been higher, he said, because birds forage in order to keep warm, and that tends to make them more visible.
Results, and the big picture

At 2 p.m., Boutis and Gretchen and Ken Beers reconvened at the Vernet Ecological Center. Boutis said the big surprise for him was how hard it was to find a blue jay, typically a common winter bird. The Beers were busy compiling pages of counts from multiple sites they’d covered over six fruitful hours of birding. They recounted seeing numerous sparrow species, four hermit thrushes and a yellow-rumped warbler near the Horace Mann statue in the Glen, among many other common and less-so species.

“But the best bird?” said Gretchen Beers, with obvious delight. “Fourteen sandhill cranes. They were squalling.”
No final count was available at the time of writing, but it usually numbers in the several thousands, though with significant yearly fluctuations, said Boutis. Sightings of four common flocking species — European starlings, American robins, American crows and Canada geese — can dramatically affect the tally of individual birds.
“The number I keep my eye on is the species number,” said Boutis. The species count in our local circle usually hovers in the high 40s to low 50s, he added.

Boutis will compile the local data and provide it to the National Audubon Society, whose experts will amass and review data from tens of thousands of citizen scientists. In about a year, birders will have the results of the 2015 early winter census — giving them the even bigger picture of the big numbers their own eyes and ears recorded.
By counting local birds, birders make local birds count in that huge data set. And the count offers tangible proof of the value of local efforts to preserve and restore places where birds and other animals can flourish, said Boutis.

“If you maintain their habitat, they will come,” he said.

Besides, birding is — as this reporter discovered — its own demanding yet exhilarating brand of fun.
“Any day I get to spend in the Glen looking at birds is a good day,” Boutis said.