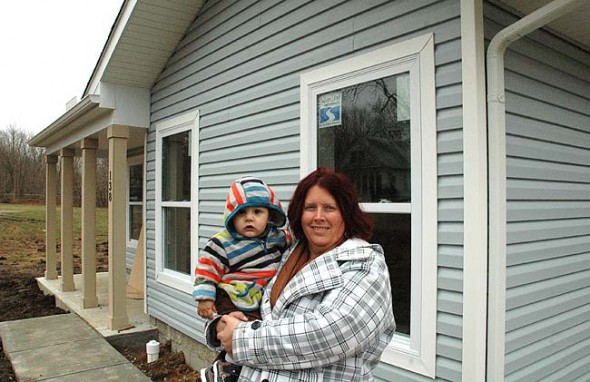 New first-time homebuyer Julie McCowan, holding her grandson, Dylann, in front of the Cemetery Street home she recently purchased through Home, Inc. for her four-person family (plus frequent visits from “little ones” like Dylann, she said). Villagers wishing to celebrate with McCowan and her family and learn more about Home, Inc.’s Cemetery Street development are invited to an open house at 138 Cemetery St. on Friday, Jan. 29, from 5 to 7 p.m. (Photo by Audrey Hackett)

A ‘C-Street’ home of their own

Villager Julie McCowan recently bought her first pieces of art, including photographs of the Glen and a cheetah print she found downtown. “I can’t wait to put them up,” she said last week.

The impetus for her purchases is another first — buying her first family home, a three-bedroom, two-bath house on Cemetery Street that fronts the road and offers views of the woods and the old amphitheater out the back windows.

“I love the backyard,” she said. So do Tyreese, her 15-year-old son, and Breanna, her 11-year-old niece, whom McCowan and her partner, David Benning, are raising. The family of four will frequently be joined by “little ones,” she added, including her stepson’s young chidren, eight months and 18 months, and her daughter’s first child, who is on the way.

The McCowan family home is the second property to be developed in Home, Inc.’s Cemetery Street project. “C-Street,” as staff call it, is a four-unit, permanently affordable housing development that represents a “historic” partnership between the Village, which sold Home, Inc. the land at half price, and the 18-year-old affordable housing agency, according to Executive Director Emily Seibel.

“We wanted to create housing that would be available for diverse young families,” Seibel explained in a recent interview.

The first C-Street home is owned by the Wyant family, parents Erica and Caleab and their three children, Callum, Ziven and Rudy Mae, who moved in last January.

McCowan and her family will get the keys to their new home, 138 Cemetery St., during an open house there this Friday, Jan. 29, from 5 to 7 p.m. Home, Inc. supporters and villagers wishing to celebrate with the family and learn more about the project are invited to attend. At that event, the homebuyer for the third C-Street home will be announced, according to Seibel.
“With Julie and her family moving in, phase one of the project is complete, and phase two is now underway,” Seibel explained. There is still one slot left on Home, Inc.’s homebuyer waiting list for the fourth C-Street home, she added. It’s slated as a “special needs home,” but that designation is “broad and expansive,” according to Seibel, so prospective first-time homebuyers of moderate income are invited to contact Home, Inc. for details.

While Home, Inc. does not have fixed income guidelines, the agency typically serves people whose income is up to 80 percent of area median income, currently $61,700 for a family of four. First-time homebuyers include people who have not owned a home in the past three years, as well as those who have never owned a home.

For many years, home ownership was not something McCowan envisioned for herself and her family. She has worked as a certified nursing assistant at Friends Care for 27 years, moving to the village from Xenia shortly after starting the Friends Care job when she was just 17 years old. These days, McCowan, who turns 45 on Sunday (auspiciously, her birthday coincides with the start of the family’s move), works part time at Friends Care, as well as providing in-home care for two people in the village.

“Julie is a longstanding community member,” said Seibel. “I have so much respect for her caring for elders and others. She’s just a great human being.”

McCowan has lived in a number of rentals during her nearly three decades in the village; for the past 13 years, she and her family have resided in a rental on Whitehall Drive whose landlord, Judith Hempfling, first told her about Home, Inc. and encouraged her to apply.

That application put her on the homebuyer’s waiting list, which Seibel said is really more of a “homebuyer’s preparing list.” Over 30 households at any given time are on the list, said Seibel, and being on it requires a commitment to actively work toward a mortgage. The process is rigorous, confirmed McCowan, and in her case took several years, “but you learn a lot.” One of the toughest aspects was “getting my credit score up to beat.” With support from Program Manager Chris Hall, she did that, and much more.

“Julie has come a long ways in a relatively short period of time. She’s been really committed to this program,” said Hall, who worked with her throughout the process. “It’s not easy getting mortgage-ready. She’s put a lot of hard work in.” That work also includes 100 hours of “sweat equity” on her home, plus work on the neighboring Wyant property in the spirit of “paying it forward,” noted Seibel.

“Like Julie, lots of clients support their future neighbors,” said Seibel. “It feels like a ‘barn raising.’”

The Cemetery Street project began in 2011, when Village Council approved the sale of four lots on 0.7 acres of Village-owned land for permanently affordable homes. Home, Inc. was chosen as the developer for the project, and broke ground in 2014. Each C-Street home costs about $185,000 to build, for a total project cost of approximately $750,000. Homes are sold for between $115,000 and $120,000, Seibel said. Subsidies bridge the gap between development cost and purchase price to make the homes affordable for lower-income buyers. Home, Inc. has raised more than $260,000 in subsidies to date, mostly from funding sources outside the community.

The C-Street development will generate approximately $10,000 annually in new property taxes for the Village, said Seibel, and is geared for housing families with children.

“I see the project as creating a neighborhood,” reflected Adam Abraham, an AmeriCorps VISTA volunteer in his second year of working with Home, Inc.

“There are lots of tangible benefits,” Seibel agreed. But some of the intangibles, such as “pride and stability,” are among the most powerful to her.

The goal, explained Hall, is not just to prepare clients to buy a home, but to help them sustain home ownership over time. “We’re the home developer that doesn’t go away,” he said. “We’re not going to tell you to cut your grass, but we will be here to help out if you encounter ‘trigger events’ like job loss, or other bumps in the road.”

As proof of the value of extending the agency’s stewardship beyond the purchase, not a single Home, Inc. home has foreclosed, he said. And many of the agency’s homeowners have gone on to purchase market-rate houses, added Seibel.

“We set people up to succeed from the get-go,” she said.

And that’s important not just for individual homeowners, but for the village as a whole. Home, Inc. homeowners include artists, small businesspeople, entrepreneurs and “treasured residents like Julie, who care for our elders,” said Seibel. Preserving income diversity in the village ensures that “all the people who make Yellow Springs Yellow Springs” will be able to live and flourish here, she added.

From Abraham’s perspective, “Julie is exactly the kind of person Yellow Springs can’t afford to be losing.”

McCowan, meanwhile, is looking forward to decorating her family’s new home. She particularly loves the open layout, she said. “I can sit in the living room and see what my grandkids are doing in the kitchen.” And she’s looking forward to spring evenings on the front porch.

“It’s just comforting to have my own home,” McCowan explained. “I want to set roots, especially for my grandkids.” As far as she’s concerned, C-Street is her first home — and her last.