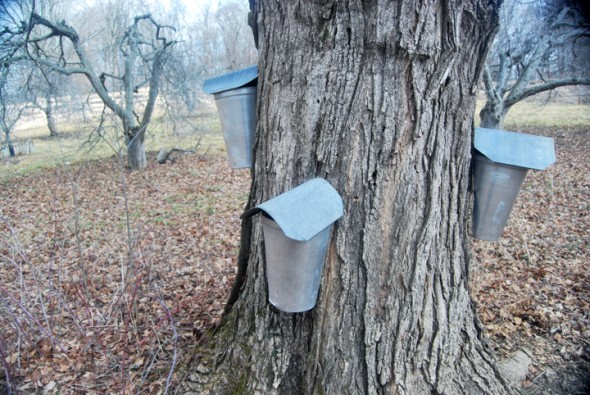 John Dewine of Flying Mouse Farms stands before the smoking evaporator more as a guardian than a farmer; periodically testing the hydrometer on the side to make sure the density of the syrupy river rushing through the many chambers falls within the correct measurements. If it strays above a marked density, it will crystalize. If it falls below, John will be selling sugary water rather than syrup. It’s all a balancing act.

The acquisition of the sap is a precarious business too. There is a narrow window of time to tap the big Maple trees at Flying Mouse and gather enough sap to boil in the “Sugar Shack” out on John’s property. The temperatures must fluctuate a certain way throughout the night and day; cold when the sun goes down so the sap stops flowing, and warmer during the day to get the sap going. If there is the right combination of temperature fluctuations, the process can happen. Otherwise, not so much luck. As John explains, some seasons are more profitable than others, and he is at the mercy of the changing temperatures.

The Maple tree is one of the only trees able to produce syrup. Some species, like the Birch, can make a syrupy concoction but the Maple tree rules. Why? Scientists are not quite sure. John explains that as far as we know the cells of a Maple tree are structured in a special way which makes the tapping process work. He himself has a PhD in Ecology. When asked if having something like that aids him in his farming practices, he smiles and says “It helps…” The practice of tapping maples for syrup is sustainable as long as John doesn’t drain a massive amount. The trees regenerate sap quickly.

It takes approximately forty gallons of sap to make one gallon of syrup. Workers spend long hours hauling buckets back and forth from the six hundred and fifty metal taps over to the giant plastic barrel suspended above the shack that feeds the evaporator. The contraption has long, chambered gradients that run the sap through and filters out unwanted flotsam while evaporating enough water to make the syrup thick and edible. John is able to produce a few gallons of syrup per hour of boiling. An old fashioned wood furnace underneath powers the whole process. Sap boils at a slightly higher temperature than water (seven degrees higher), so more heat and wood is required for the process. John is constantly adding more wood to the furnace during the procedure.

There is a final filtering process before John bottles everything up. He pours the sap that has gone through the evaporator through layers of thick cloth to get rid of any last unwanted particles. Then, he bottles the sap and sells it to us! Delicious syrup is the final reward for all the hard work, and the syrup at Flying Mouse is something special. Many people in town have become enthusiastic and regular customers. Early Native American tribes began tapping trees for syrup many centuries ago. They used hollow logs to hold the sap and boiled it with heated rocks. Methods are more sophisticated now, but our love of syrup has not diminished. It is a special part of our diet, and a special product that Flying Mouse Farms has given us.