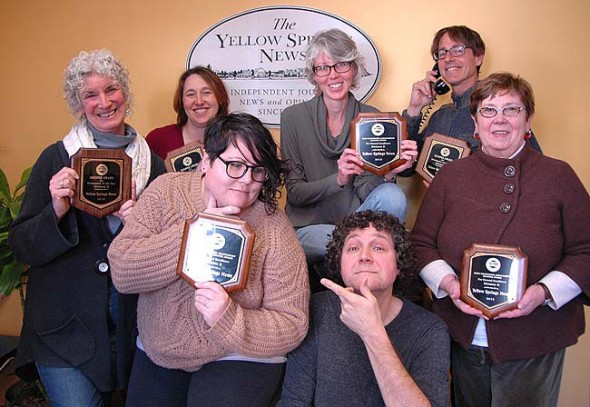 For the sixth year in a row, the Yellow Springs News brought home the top prize in its size category from the annual Ohio Newspaper Association convention, which took place last week in Columbus.

The News won “Newspaper of the Year for 2016” in Division D during the annual competition for weekly papers. Forty-nine weeklies took part, divided into four divisions according to size, and Division D is the division for the smallest papers (the News circulation is 2,100). In most categories the News competed against 15 other papers, for the period from August 2014 to August 2015.

The Newspaper of the Year award went to the paper in each division that won the most points in a possible 15 categories. Judges were journalism professors from Ohio University, Ohio State University, Kent State and Bowling Green University.

The News also won first place in in-depth reporting for its eight-part series, “Police Matters,” about the relationship between Yellow Springs police and the village. The judge stated, “Excellent series — engaging and committed to the broad topic. Anecdotes really makes the series come to life and engage readers over time.” Contributing to the series were Reporter Megan Bachman, Associate Editor Lauren Heaton and Editor Diane Chiddister.

The News swept the in-depth reporting category, winning not only first place, but also second and third. Second prize went to two articles focused on an analysis of hard and soft water, written by Megan Bachman. And third place went to “A balance of beaver, human needs,” a single story by Bachman on Village efforts to accomodate beavers who moved into the Glass Farm detention pond area.

Three columns by Lauren Heaton took first place in the category of original columns. According to the judge, “Lauren Heaton’s columns are a great example of the critical role a local journalist plays in the news ecosystem. Appalled by a police shooting at a Beavercreek Walmart, she turns attention to an opportunity for her community to make sure her community doesn’t make the same mistake …”

While in other categories the News competed only with other papers in its size category, in Best Editorial the paper competed with all 49 weekly papers. Chiddister won fourth place for the editorial titled, “Questions on Policing.”

The News won first place in the category of Best News Photo with Heaton’s photo of a Black Lives Matter vigil in front of the Greene County Courthouse. “Tells a story with action and expression,” the judge wrote. “Excellent use of black and white photography.”

In the category of Advertising, the News won second place for three ads designed by Matt Minde and Suzanne Szempruch. “Overall clean, organized and effective design,” the judge stated.

The News also won first place in Special Editions, for the 2014 Guide to Yellow Springs, titled “The Village at Work.” The guide featured several stories on the local economy by Bachman, Heaton and Chiddister and was designed by Minde. The judge stated, “A clean, uncluttered design shows off extensive content. Good mix of lists and interesting, well-written features.”