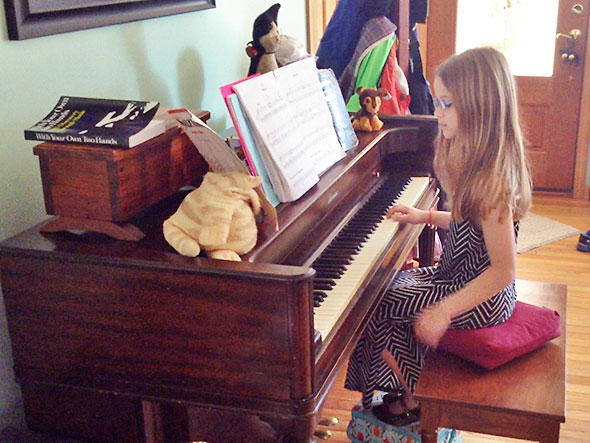 This Friday, my daughter held a piano recital for four of her closest friends. We made a big deal about it. We ordered carrot cake and bottles of Martinelli’s Gold Medal Sparkling Cider from Current Cuisine. We rearranged the living room…pulling the love seat to a place of honor for her music teacher Phillipa Burgess and placing dining room chairs around the piano bench. Our daughter donned an elegant black and white dress from Kismet. She brushed her hair straight and long to match the gown. 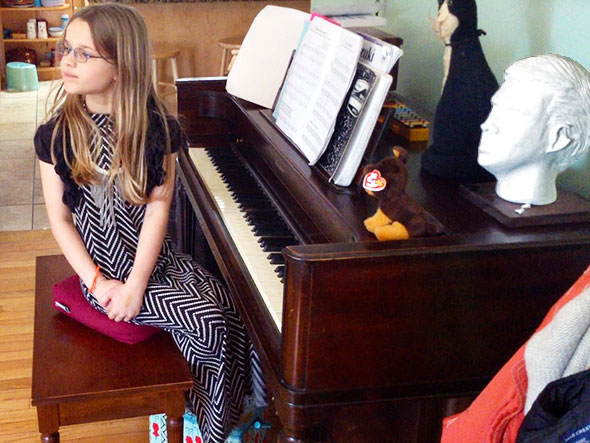 She performed a book recital…playing all 26 songs from her first piano book…pausing halfway through for intermission and refreshments. As a warm up, she began with variations on Twinkle, Twinkle, Little Star. She played these variations with the right hand, then the left, focusing on the technique featured in each adaptation. Completing the twinkle sequence, she proceeded on; the remaining pieces feature both hands playing together with progressively greater intricacy and expression.

The first set of songs are cute, vaguely familiar nursery rhymes. Theses she presents one after each other pausing to turn round to her right, bow slightly, and acknowledge our applause. When she returns to the piano after intermission for her second set, she begins offering commentary. She tells us how, in Little Playmates, she imagines each hand—the right and the left—talking to each other. She recognizes the mood shift in Chant Arabe and the similarity in pace between Allegretto I and Allegretto II. Sitting next to Jeremy and myself, Burgess pointa out the moment that our daughter relax, stating in mock alarm, “Uh oh, she’s getting comfortable.” Indeed, we devolve into silliness shortly afterwards but only once and only for a moment. Burgess calla us back to attend immediately. 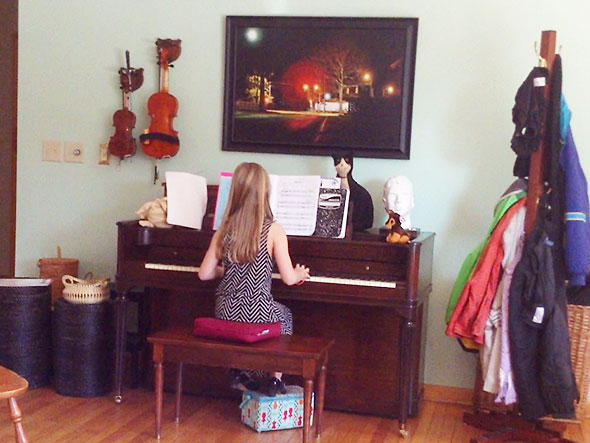 Our daughter remains composed, mindful of her technique and posture. She sustains a formal air thoughout the performance. Her friends fiddle as young people do but guve her their rapt attention. She closes the performance with a composition Musette that she describes using her father’s word—haunting—and plays it just so.

As Burgess and our mutual friend Jennifer Gilchrist praise our eight year old on her performance, posture, and technique, I look on and smile remembering the night prior. The practice before the performance did not go well. In genuine horror, I threatened to pull the plug or to simply not attend. My husband Jeremy took over coaching at the piano, and I prepared for bed Thursday night having a hard time imagining the next day proceeding without pain. Just before lights out, I told my daughter “You’re good, but you’re not ready,” and counseled her to practice at school the next day. Jeremy did not intervene but he did avoid me the rest of the night. Expressing his disapproval, he chose to sleep in the spare bed. I took the snub to heart and fell asleep tempering my tune.

Our daughter began taking piano when she was four. Six months earlier, Jeremy bought our piano from Hauer Music just before the Hauer family moved out of Dayton to Centerville. On the lookout for a music teacher, I picked up a promising flyer at the Yellow Springs Train Station. The flyer offered Suzuki piano or violin lessons. I took down the number and called Burgess. We arranged a lesson and to my delight the very next day my daughter asked when she could start playing piano. “Tomorrow,” I replied. 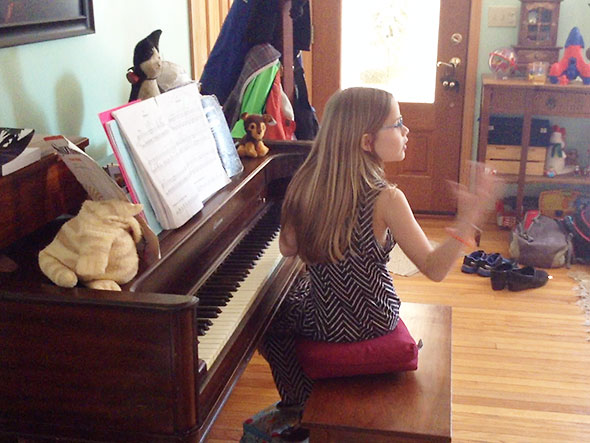 We met with Burgess on Friday. We’ve gone religiously ever since. We’ve been less disciplined about practice however. The Suzuki technique is designed for young children. It focuses on posture and the development of a sensitive ear. To master a piece and the technique it features, we practice measure by measure, line by line, until we can play the tune all the way through. When I say “we”, I do mean we. Burgess expects us both—student and parent—to practice together. She tasks us to listen to the CD of piano songs regularly and instructs me to sit at the piano with my daughter switching off between correcting her form and practicing the instrument myself to model the work. Executing this task has been hard; I learned that my daughter does not sit well. When she was little, she would finsih a single measure—a simple progression of notes—and her hands would fly off the piano keys like startled starlings. I put in an outsized effort—outsized for a child her age—to get her to reset her hands on the piano and continue. Progress was slow. Maddeningly slow. At times, I was so near giving up that I picked up the phone to cancel with her lessons thinking she just wasn’t mature enough. That very real threat seemed just the thing to free my daughter from her restraints. She’d play her best in that excited state, with confidence, without mistake. I’d look on confounded at how she could be so scattered in one moment and so together in the next. At first I put her behavior down as an attention getting device. That judgement however didn’t really jive. She didn’t have trouble getting my attention. She had trouble keep her own. 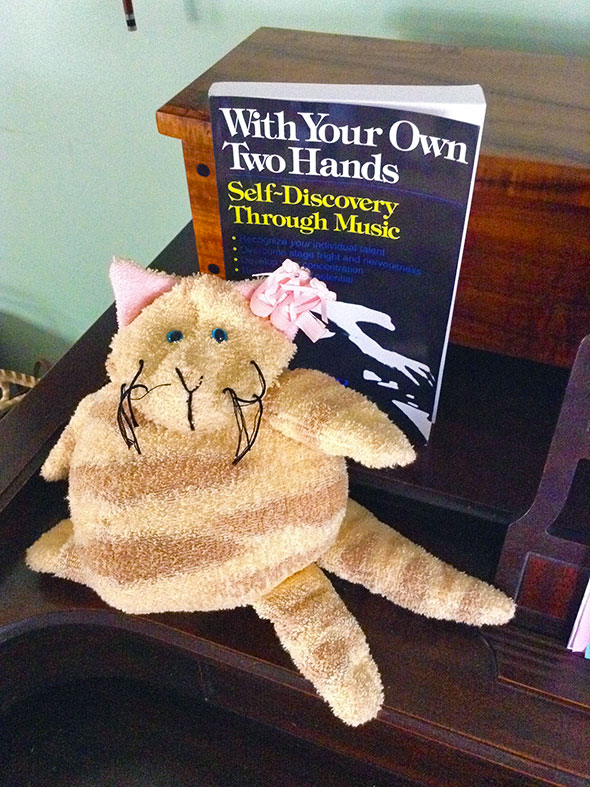 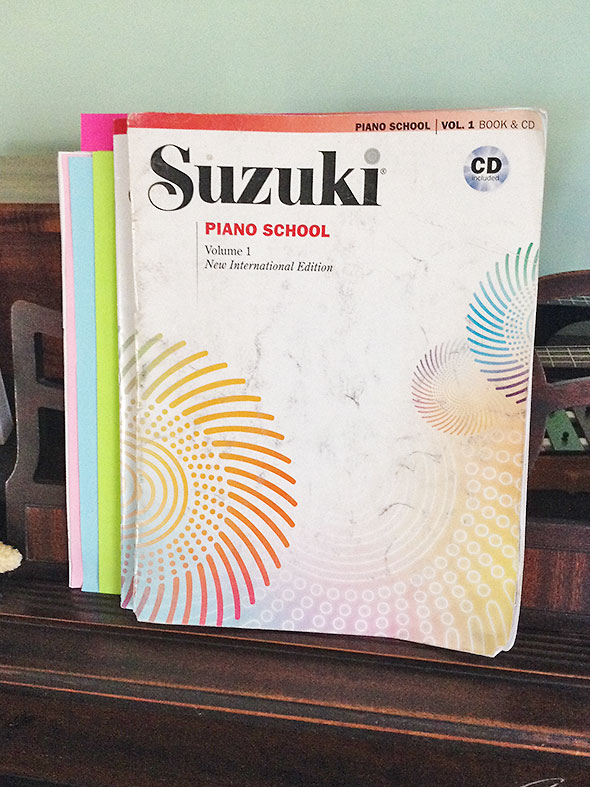 Since those early days, I’ve learned a term: Executive Function. This function refers to the internal impetus that we all need to overcome inertia and begin a task. The executive function of young person is less mature than an adult’s. Kids need more support, more stimuli, more motivation to overcome anxiety and engage. As parents and mentors, we heap supports on top of our children until we understand what proportions they need and where. Threatening to cancel lessons worked to click her executive function into functioning but knowing these threats would inevitably lead to actual cancelation, I switched tactics. I figured practice would improve if I could just motivate my daughter to keep her hands set at the piano. If we could get her to hover just above the notes where she was supposed to play, to be aware of that posture, life would improve. I found a puppet among our collection of animals, a potbelly tiger cat that I bought at a Yellow Springs street faire almost two decades ago, and called her Miss Kitty. Miss Kitty began to participate in our piano practice as a stand in for Burgess, our at-home instructor, though instead of Burgess’s Australian accent, Miss Kitty’s accent is French.

Miss Kitty loves music, but she hates waiting. Her job was to get her student into position to play and to keep her in position. If my daughter removed her hands from the piano, Miss Kitty would scrunch up her face in a fit of pique. Miss Kitty’s mood would dramatically improve when her student sat properly in position. Miss Kitty was rapturous as her student performed. Freed from the laborious end of administering our practice sessions, my job was to give encouragement and offer pointers on technique. Miraculously, once Miss Kitty’s corrections were made on set position, practice became more disciplined, more effective, and more enjoyable for the three of us. Progress sped up dramatically. A steady focused discipline on set position was almost all it took to overwhelm the enemies of executive function. Our family found that knowledge a revelation. Life got better. 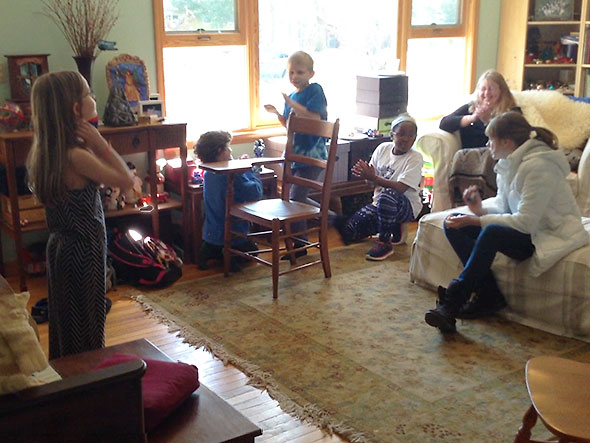 Right before our home recital on Friday, my daughter caught me in the hallway. There, between her bedroom and the living room that contained her friends and teacher, she told me, “Don’t worry, Mom. I practiced all my songs today at school and it was GOOD.” I breathed deep, grateful to my daughter for reaching out and resolving Thursday night’s frustrations. I gave her a giant hug and told her with great faith and equal pride that she was going to play beautifully. I had no doubt. We had assembled all the elements to bring out her best instincts and to play brilliantly. In that small moment before the big event, all she wanted was for me not to worry. I wasn’t. To the contrary, I was certain of her success. I’m grateful that she took the chance to reassure me. I am relieved that I was honestly prepared to return my full assurance.

Together we entered the living room. I took my seat next to Phillipa, and Alexandra commanded the room to attention.