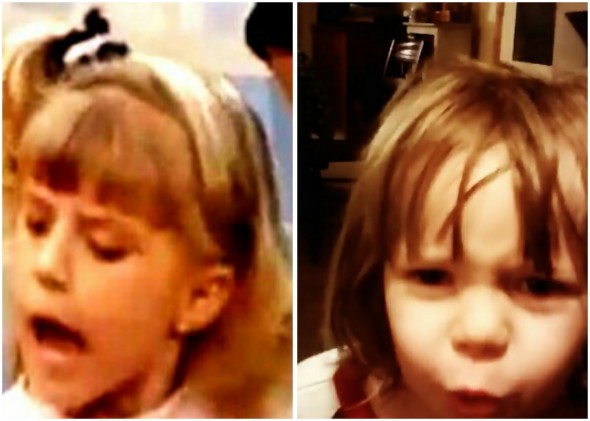 If you are on the Internet and reading this now, then you are probably aware that “Fuller House,” the much-anticipated, much-advertised and much-panned spin-off series to “Full House,” was released on Netflix at the end of last month. (If you’re not, what’s your secret?) If somehow, amazingly, you’re not familiar with the pop-cultural explosion that was “Full House,” I will sum it up: from the late ‘80s through the mid ‘90s, three grown men raised three children in San Francisco, all the while saying lots of catch phrases. I watched the first episode of the new spin off last week; nearly all of the original characters return in this new show, as do the majority of the catch phrases, including this one, spoken by consummate middle child, Stephanie Tanner:

(For those unable or unwilling to watch the clip: a blonde child saying the phrase “How rude!” a bunch of times in succession.)

Watching “Full House” as I was growing up, I didn’t tend to care too much about Stephanie’s character; older sister DJ was the cool one, and younger sister Michelle was the adorable one. Stephanie was the one apparently obsessed with matters of etiquette; she could take umbrage at just about anything, a trait that annoyed me.

So of course, I have a 5-year-old daughter of my own, who turns out to be the most Stephanie-Tanner-esque little creature I have ever yet run across in real life. I cannot tell you how many times a day Lucy tells me I’m being rude. Actually, yes I can: she says it any time I tell her something she doesn’t like (“Clean your room!” “Eat your food!” “Don’t burp in my face!”), and apparently I say things she doesn’t like all day long. It’s not that she’s totally ignorant of what kinds of behavior constitutes “rudeness;” she knows, for example, that it’s rude to interrupt people when they’re talking, but we can’t help but interrupt her because she never stops talking, and she can’t help but interrupt us, because she’s never listening. Nevertheless, most of the meaning of “rude” escapes Lucy because she’s too young to know what rudeness looks, sounds and feels like. Which, of course, makes it extra galling that she accuses us of it so often. In my own personal utopia, she’d just go around saying this to me all day:

A certain amount of politeness was expected of my sisters and me when we were growing up: you had your standard “please” and “thank you” and your no-elbows-on-the-table, but you also had being quiet in church, not singing at the dinner table and saying “Yes, Ma’am” and “No, sir” to any and all adults, especially your parents. As I got older, I learned more rules of etiquette from my parents by unspoken example: always hold the door open for people; always feed a guest; be quick to loan, but hesitant to borrow; if your child is in an argument with another child, try to defuse the situation without publicly taking your child’s side — but later you and your kid can both rag on the other kid behind her or his back.

Some of these rules of etiquette have lost their flavor for me as I’ve gotten older. I have, for example, not instructed my kid to call me or my husband “ma’am” and “sir,” because our apartment is not military school. I also cannot, in good conscience, tell her not to put her elbows on the table, because I started doing it the day I moved away from home, and I’ve never looked back. And while, if you come to my house, I will hold the door open for you and then feed you, I will now neither borrow nor loan, and I will sometimes both take my kid’s side in a fight and talk about your kid behind her back.

Setting aside the fact that etiquette is, in some ways, subjective, the concepts of rudeness and politeness are very neatly ingrained in many cultures, yet the reasons behind them can be so difficult to explain to a child. For example, when we go to the pool at the Wellness Center, and Lucy sees a man with a long, white beard, I have to explain why it’s not polite to point at that man and yell, “Hey, it’s Dumbledore!” in a large, echo-y room.

Some rules of etiquette can be explained away in terms of empathy; that is, if you point to an old guy and say he looks like a fictional wizard, it might hurt his feelings (though it wouldn’t hurt mine, because Dumbledore is awesome). But some are more tenuous: Why do I have to say “excuse me” when I burp? Why can I only pick my nose in my bedroom? Why do I have to share my toys with my friend when she comes over, but I can’t make her share her toys with me?

The only thing I can think to say to her is that most rules of etiquette operate on the simple premise that you are not the only person in any given place and that you are not more important than the other people around you. This is hard for kids to grasp, I think, because we so often treat them like they are the most important people we know (because, actually, we think they kind of are).

Unfortunately, most concepts of “rude” don’t sink in until kids can learn the nature of two things: offense and embarrassment. I learned to be embarrassed at an early age (because my dad is a preacher and would talk about my sisters and myself from the pulpit often), therefore I recognized the feeling when I realized I had done something rude. But, unlike Stephanie Tanner, who was apparently born being slighted, I don’t think I was “offended” by something until I was nearly in middle school. I remember it was such a small thing: I was waiting in the lunch line at school, and a boy behind me, very matter-of-factly, said my bangs looked weird. Okay, not that big of a deal. Not necessarily mean, not necessarily cruel. But it was clear that this boy hadn’t considered how such a comment would make me feel, and he didn’t really care. He was rude to me, and I felt pretty bad about it.

I think about this whenever I try to teach my daughter the ins and outs of etiquette; sure, each time I correct her for being rude to one of her little friends, it’s perhaps a step closer for her to understanding how to be polite and, ultimately, kind to others. But it’s also a bit of a Pandora’s Box: one day she’ll learn to be embarrassed by her own behavior. And, perhaps worse, she’ll learn that her friends can be rude to her, too, and this dawning realization will hurt her.

Or, perhaps, she’ll stay happily oblivious for the rest of her life, picking her nose while singing the same line from “My Grandfather’s Clock” over and over during dinner, elbows resting neatly on the tabletop. Just as her mother does.