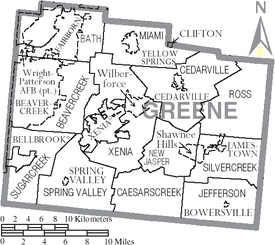 BLOG – The History of Miami Township is Pretty Interesting

“It is a source of regret that more care has not been taken to preserve the history of the early settlers of the County of Greene,” wrote historian George F. Robinson in 1897. But it is thanks in part to Robinson that we know as much of their history as we do. Robinson realized that many of the area’s founding documents were in the unsorted boxes stashed in the attics of government buildings around Greene County, “like a well-worn garment cast away.” He took it upon himself to sort through these documents and preserve what history he could, and even managed to get a weekly salary from a government agency to do so.

He traced how land changed hands, who lived where and why, and he compiled his findings in a 1902 book remarkably entitled Robinson’s History of Greene County: Embracing the Organization of the County, Its Division into Townships, Sketches of Local Interest Gleaned from the Pioneers from 1803 to 1840, Together with a Roster of the Soldiers of the Revolution and the War of 1812, Who Were Residing in the County, also, A Roster of Ten Thousand of the Early Settlers from 1803 t0 1840. It is partly through his organization of these records that the early history of Miami Township is known, and it is partly through an exploration of Robinson’s volumes that I found the following interesting bits of information.

Miami Township was founded on June 6, 1808, a land of verdant beauty bisected by the meandering of the Little Miami River. The township was originally much bigger than its current size, but its boundaries shrank when Ross and Clark counties were established in 1811 and 1818 and usurped some of the northern part of Greene County, in which Miami Township sits. Some citizens of the Township were miffed at this geographic slight. General Benjamin Whiteman made such a stink about the changing boundaries that he was able to have a bill introduced into the Ohio General Assembly that officially redrew his property back into Greene County, though township boundaries were redrawn no less than three times over the succeeding decades and eventually whittled the township into the size it is now.

A few individuals are said to hold the distinction of being the Township’s first permanent (American) settler, but a man named Lewis Davis is the most agreed-upon candidate for first settler. Davis was a land surveyor who founded a few other towns in Ohio and Indiana, and a chance meeting with an “Indian maid” led to him to the land that would ultimately become Miami Township. Davis was living in Dayton in 1800 and met a woman “who, for some reason, struck up an acquaintance with him.” She told him of a beautiful land full of forests, fields, and springs. Davis went to check out it out and was so impressed that he promptly surveyed and registered the land, purchasing it from Congress in 1803. (“Davis is not said to have married the girl, although it would have added flavor to the story if he had,” notes historian Michael A. Broadstone in History of Greene County, Ohio.) Davis built a tavern and traded with the Shawnee and eventually marketed water from the area’s springs, noting in an advertisement for the bottled water that the area’s “air and water are esteemed particularly salubrious.” He appears to have left the Township area sometime around 1811, bouncing around other counties and states and making a fairly comfortable living as a land surveyor. However, he “fell prey to the wiles of King Alcohol” (or, as another historian put it, “he preferred corn in the liquid form to the product in the shape of meal”) and fell into ruin, dying in obscurity. A few decades later an anonymous writer said Davis was buried under a large boulder in Logan County. The writer penned a quick eulogy for the man, not that Davis died, he said, “unhonored, unwept, and unknown.”

Miami Township boasted 96 tax-paying citizens in 1808, and slowly grew from there. Clifton is the oldest town the Township, founded in 1833 by some “enterprising Yankees” who likewise were in the business of land surveying. Other towns steadily followed.

The first township road was laid out on March 3, 1822, though there were several “so-called roads” before 1822. Broadstone writes that year by year the roads improved until, at the time he was writing his History – 1918 – most roads in the township “were at least graveled.” Miami Township has the dubious distinction of being home to the first vehicular accident in Greene County. Lodrick Austin, a stagecoach driver, was killed when his coach overturned on Clifton Gorge Road in 1836. Austin is buried in Clifton Cemetery, and his tombstone features a horse and a coach, which honestly seems a little insulting.

And, of course, humans being humans, Miami Township’s first murder was committed shortly after it was founded. William Catrill was accused of murdering a child he fathered with his wife’s sister. In November 1809, Catrill is said to have killed the child and thrown the body in with the hogs, supposing that the hogs would remove all traces of the crime. The child died but was untouched by the hogs, and Catrill was arrested and tried, though he “escaped the extreme penalty” of death.

As part of all this growth and human drama, the township boasted a few noteworthy buildings. One of them Broadstone simply calls “A Famous Barn.” The barn, built by John Bryan, was apparently the largest in the entire state, measuring 206 feet long, 120 feet wide, and 75 feet tall, later made even bigger by an addition that was “itself larger than the average barn.”

Another quirky building was the home of a “communistic” group called the Owenites, who built a “long, rambling house” as a communal home for members who settled in Miami Township after their original enclave in Indiana collapsed in the mid-1820s. “The facts concerning this strange settlement are obscure,” says Broadstone, but it is known that the group shared money and that “no man was considered more important than the other.” Likewise, everyone lived and cooked in the large structure, and everyone pitched in to build it. Pitching in was apparently part of the group’s directive, to the point of doing tasks one was unfamiliar with: “Men who seldom or never before labored with their hands devoted themselves to agriculture and the mechanical arts, with a zeal which was at least commendable, though not always according to knowledge.” Nevertheless, the building came together. Each family had its own room, and more rooms were added as the settlement grew. The building was eventually one hundred feet long and twenty feet wide. But the settlement folded within a year, partly because of the lack of practical skill and partly because a handful of members were trying to self-appoint themselves leaders. According to Broadstone, most of the original members of this group left Greene County, but a few of them remained and became “useful citizens of the township.” The building fell into disuse and collapsed, though it’s foundation was in tact for at least the next century.

The above was researched for a personal project in which tales from early Miami Township are told alongside equally fascinating snapshots from the Township of today. Ground-penetrating radar in Glen Forest Cemetery, attending a snow and ice removal conference with township trustees from all over Ohio, preparing for election day, and, of course, more tales of intrigue and murder from throughout the Township’s long life – all coming soon in a nonfiction novella called “Township Trustee Meeting.”