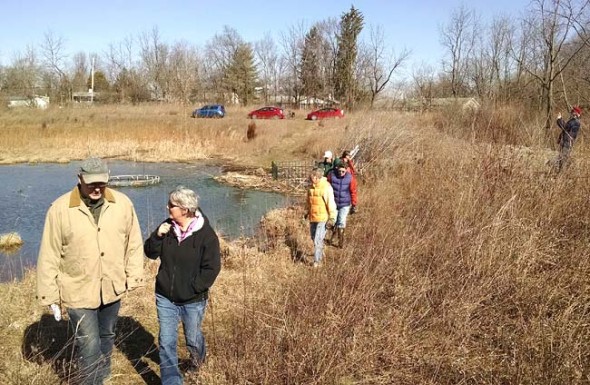 Tecumseh Land Trust and YS Environmental Commission volunteers walked the Glass Farm wetland area on Sunday, Feb. 28, to make plans to enhance habitat there. The project is funded by the Clean Ohio Open Space Fund, and advisors from Beavercreek Wetlands and Five Rivers Metroparks joined in the walk. (Submitted photo)

Educating villagers on alternatives to pesticides is one of the current projects of the Environmental Commission, or EC, according to EC member Jessica D’Ambrosio at Village Council’s Feb. 16 meeting. D’Ambrosio was giving the group’s report on 2015 activities.

“We hope to raise awareness on pesticide use,” she said.

The EC was reconstituted in the fall of 2014 after a several year hiatus, according to a written report, and since then has taken on a range of projects. Current members, along with D’Ambrosio, are Duard Headley, Nadia Malarkey, Tom Dietrich and Council liaison Marianne MacQueen.

Currently, the EC is working with the national nonprofit Beyond Pesticides, to “research the development of a model organic land management policy for the Village as well as educate residents on these methods,” according to the written report. The group hopes to invite the maintenance crews of Antioch College, Antioch University Midwest, Yellow Springs schools, Glen Helen and neighboring city managers to a training on the topic, along with educating local residents. The EC has already met with Village crew, who are now applying “organic land management practices” to Village-owned land.

The impetus for the alternatives to pesticides project was a June 2013 incident when a Village crew member’s misapplication of a toxic pesticide to the grass surrounding the Gaunt Park pool sparked a two-day pool closure, along with heightened concern among villagers regarding possible effects of the event. “..It became clear there was a general lack of knowledge and awareness in the community regarding the impact these pesticides could have on the health of the community, especially young children, and our eco-system,” the report states.

The group in 2015 also moved forward with the Glass Farm wetlands project. Throughout the year the group worked to gather information requested by Council regarding the performance of the flow device on the retention pond that had become inhabited by beavers, seeking both to assure flood control to the neighborhood and provide a stable water level for beavers and the increasing wetland flora and fauna in the area. The flow device has been determined to be working effectively.

After partnering with Tecumseh Land Trust and receiving approval from Village Council, the EC submitted a Clean Ohio grant proposal, which was awarded in January 2016. The grant will fund the establishment of a conservation easement on the eight-acre retention pond wetlands area, the removal of invasive plant species and restoration of the area with native trees and plants, and additional amenities for public access, including benches and parking.

A third focus of the group’s attention is the creation of a Climate Action Plan for the Village, with the goal of lowering the carbon footprint of the village. The process for creating the plan includes gathering data on current local energy use and guidelines for energy use reduction targets, including a plan for reaching the targets.

The EC also plans this year to move forward with updating the Village Wellhead Protection Plan, which seeks to ensure the protection of the local aquifer.

In other Council Feb. 16 business:

• Council heard the annual report from the Human Relations Commission, or HRC, presented by group chair Nick Cunningham. The group has worked on about 20 projects over the year, according to Cunningham, including sponsoring block parties, partnering with YS Kids Playhouse, holding conflict resolution training for local police, and promoting self-defense training for girls. Ongoing projects include partnering with NAMI to sponsor support groups for those with mental illness and their families; establishing the Village Assistance Network to provide short-term financial assistance to villagers with financial need; and establishing yshelp.org, an online clearinghouse for local resources.

“A lot of neat things happened at the library” last year, which was also its 50th birthday, Colon said. Currently, the local library has 6,155 cardholders who made114,492 visits to the library last year.

A noteworthy change last year was the addition of new library programming, Colon said, stating that there were 5,207 visits to library programs, up 47 percent from the previous year. The increase is linked to the village’s support for the library’s past funding requests, and villagers’ stated preference for more programming.

“We promised to do what you told us to do, offer more programming,” Colon said. “We’re delivering and you’re coming.”

• Council President Wintrow stated that Council’s annual retreat will take place from 9 a.m. to 4 p.m. on Thursday, March 24, at AU Midwest. Agenda items include a discussion on how Council and Village commissions work together and the timeline for Council goals. The meeting is open to the public.

• Council discussed a request from Antioch College that the Village donate the water to fill the Wellness Center pool after the pool closes for cleaning in June. The Village did donate the initial water used to fill the pool at a cost of about $600, according to Manager Bates.

Several Council members asked for more information before voting on the donation, with Brian Housh expressing interest in a “quid pro quo” arrangement that allows low-income local children pool access in exchange for a donation of water from the Village.

Council’s next regular meeting is Monday, March 7, at 7 p.m. in Council chambers.