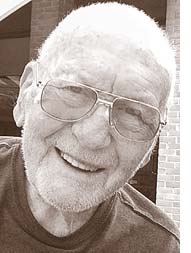 George William Muller passed on March 9, 2016, after living a full life. He was born in Queens, N.Y., on Nov. 24, 1922, to Isabelle Suzanne Krueger and John George Muller and he was raised in Richmond Hill, N.Y. After completing a degree in theology from Atlantic Union College in South Lancaster, Mass., George lived most of his adult life in New England, where he worked as a clergyman for the Seventh-Day Adventist church, including a long stint as a chaplain at an Adventist hospital outside of Boston. In midlife, he shifted careers. After completing a master’s degree in psychology from Boston University, he led counseling groups for at-risk youth and was the director of outdoor education at Wreath School, where he combined his ability to be a catalyst for change with youth along with his passion for the outdoors.

George was a curious man and loved learning new skills and exploring new places. He started knitting in his 30s, a hobby that stayed with him for a life time; he was a ham radio operator, and great believer in figuring out how to make things himself. He hiked most of the “4,000 footers” in New Hampshire, eventually purchasing land there where he built two yurts and spent numerous summers, including bringing his older grandchildren out into the woods with him. During this period, he spent a lot of time with his eldest daughter Susanne and her family, who also lived in New Hampshire and would use her home as a “pit stop” on his return to “civilization”! He worked with his middle daughter, Rebecca for several summers, when she helped to lead outdoor groups for the youth and they enjoyed a couple of canoe trips on the Allegash River in northern Maine. He took great delight that she was an artist, and vicariously enjoyed her exhibitions through photographs.

His work colleagues, knowing George’s passion for travel, purchased a flight ticket around the world as a retirement gift, and George traveled mostly in the Far East for nearly a year. He continued to traverse the U.S., Canada and Mexico in his camper truck, wintering each year in the Baja for nearly 20 years. He enjoyed meeting people in his travels and would visit with them as he crossed the country, also spending time in meditation retreats, and with his daughters. When slowed by old age, George moved to Yellow Springs to be near his daughter Rachele and her family and enjoyed watching his youngest grandchildren — Alison and Stephen — grow up. He connected to the Yellow Springs Dharma Center, Friends Meeting, joined peace activism groups, and served on the Board of the Friends Care Center, for several years. After his stamina decreased and dementia set in, George continued to travel via computer, using Google maps, and his flight simulator program, while listening to his favorite classical music station WQRX New York. A great lover of maps, he kept most of them in a drawer by his bed, along with his compass and topographical maps of areas.

George is survived by his children Rachele Bachowski (Steve), of Springfield, Ohio, Susanne Biondi (Jim), of Stewart, Fla., and Rebecca Muller, of Florence, Mass.; his grandchildren, Sara Muller-Ravett, of Northampton, Mass., Chaim Muller-Ravett, of Waltham, Mass., Zachary and Molly Cayer, of Bozeman, Mont., and Alison and Stephen Bachowski, of Springfield, Ohio; a niece, Georgia Cluff and her children David and Bob and their families. In addition, he leaves his former wife, Hazel Hutchins, of Florence, Mass., with whom he maintained a loving friendship through his life.

A memorial service will be held at 2:30 p.m. on Saturday, March 19, at the Friends Care Assisted Living Center, 170 East Herman St., Yellow Springs. In lieu of flowers, the family requests that donations be made to one of the following charitable organizations: Alzheimer’s Foundation, Friends Care Center and Yellow Springs Dharma Center.