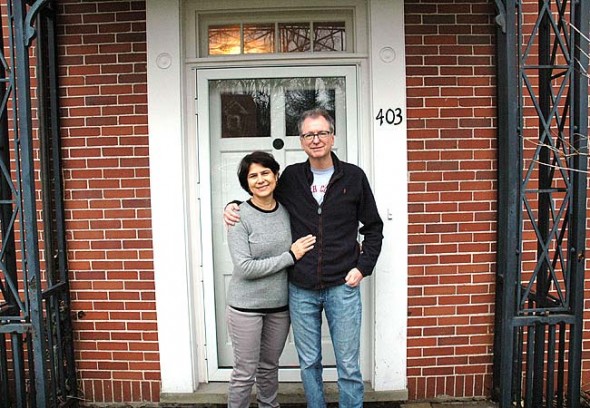 Antioch College’s new president, Tom Manley, and his wife, Susanne Hashim, stood outside their new home on Antioch’s campus, the Folkmanis House on President Street. Manley started at the college on March 1 with a full schedule of campus and community engagements; Hashim and the couple’s 11-year-old daughter, Chedin, will relocate to Yellow Springs in May. (Photo by Audrey Hackett)

If Manley had less of an air of easy calm, you might say he’d hit the ground running. In the first two weeks at the college, he’s met formally and informally with students, staff, alumni and trustees. He meets formally with faculty this week. He flew to Los Angeles over his first weekend for an alumni event; last weekend, he and his wife, Susanne Hashim, mingled with members of the college and village at a Foundry Theater reception in his honor. And he’s eating as many meals as possible in the dining hall, he said, in an effort to get to know students, faculty and staff.

“I’m trying to not just take stock but take it slow — even though I’m also moving fast,” Manley explained in an interview last Thursday.

He has clear goals for the first 30 days: draft a transition plan (done) and circulate it for comment; translate that document into a communications plan by the end of March; and begin the collaborative process of developing “common ground commitments” — he cited fiscal responsibility, “frank and respectful” conversations and the value of community as three commitments he believes to be essential — that will serve the college in times good and bad.

Since Manley accepted the job in November, he’s been reflecting on what he needs to bring to Antioch. He said he has plenty of ideas about the college’s mission and its role in higher education. “Ideas are kind of what I do,” he confessed with a wry smile. But he believes that something else is required more urgently.

“What I need to bring is not a new box of ideas to be unpacked and put on the shelf with all the other boxes of ideas. We need to develop a framework for the emergent knowledge that’s here.” In other words, he said, he sees his role as a facilitator: “not CIO — Chief Idea Officer — but CFO — Chief Facilitator Officer.”

“I see myself as working in the spaces of the college — physical, intellectual and social — and with members of the community … to elicit the best ideas that we have together, to co-design and co-create this college.”

Manley starts with an immediate challenge: a 19 percent cut in the target budget for the 2017 fiscal year, from $22 million in the current fiscal year to a targeted $17.8 million, according to the Antioch student newspaper, The Record. Asked about these cuts, Manley said, “I’m not alarmed. I’m an optimist. No one should have thought this was going to be easy.”

The college has to be fiscally responsible, he said. “It’s axiomatic.” The across-the-board cuts are needed to bring spending in line with revenue, he added. As for the Record’s description of “donor fatigue” and concerns over the college’s “donation-based financial model,” Manley emphasized that alumni support “is what brought the college back.” It’s not the case that reliance on alumni giving was short-sighted, he said.

“It was the strategy, really the only strategy that could be employed. Who else was going to care so passionately about the college’s survival?”

Manley spoke at some length about the college’s financial challenges in terms of the broader challenges facing American higher education. He described the traditional financial model of private colleges, which he said depends dually on contributions from alumni and tuition from students, as “compromised at best” and added, “many think it’s broken.” Rising college costs are a huge issue for American families, he acknowledged, and he believes that colleges are over-reliant on tuition whose escalation is “not ethically right” given the student loan debt that young people and their families incur. Antioch, he said, has an opportunity — an imperative — to reinvent the financial model of higher education.

“The big question is, what are the other sources of revenue?” he said.

Manley described a mix of initiatives and approaches. He highlighted Antioch College Village, the college’s plan for intergenerational housing on campus. (That plan was given a boost the next day, March 11, when the board of trustees reaffirmed their commitment and announced the “first bit of funding,” in the amount of $20,000, to be used to identify additional funding for the project’s first phase, according to Vice President for Finance and Operations Andi Adkins.) Manley also mentioned the incubation of businesses at the college; the sharing and leveraging of resources with the village; and alternative approaches to economy that involve self-sufficiency (the Antioch Farm, the solar array) and “exchanges in kind” involving resources the college itself creates.

These new models of revenue wouldn’t just support Antioch fiscally, he said; they would connect to and carry out its core mission.

“I’ve said to alumni that we need to be a design/build college [where] we’re not only engaged as thinkers but as makers.”

And this, Manley stressed, is precisely what Antioch’s flagship cooperative education program, or co-op, is already designed to do.

“If you imagine Antioch at its core, our co-op program is singular in the way we do it.” Its value orientation, its dedicated faculty and its integration with the curriculum are unique, he said. As is its aim.

“We are in service of finding new and better ways of living in the world.”

That deep call to service he described as “our onlyness” — what Antioch uniquely does. It’s the reason he took the position, he said. “I believe we can find those better ways. I think the very difficulties of the past 25 or 30 years help us in this.” Antioch can find solutions not just to its own challenges, but to the wider challenges of the world, and it can do this because it can “fail faster, fail better,” he said, paraphrasing Samuel Beckett’s motto of artistic grit.

“Failure is only failure if it’s terminal. Otherwise, it’s an opportunity to learn something,” said Manley.

The first 18 months are a transition period, Manley said. That sounds like a long time, he added, but given the kind of work involved in leading a college, it’s not. “The essence of this job is relationships, and relationships of quality take time to build.”

To that end, he and his wife have opted to live on campus, in the Folkmanis House on President Street. Manley has already moved in; Hashim, a development consultant, and their 11-year-old daughter, Chedin, will relocate here from Portland in May. Manley said the decision to live on campus is partly pragmatic. “It helps to be closer to work, closer to my daughter’s school,” he said. (Chedin will attend Mills Lawn.) “There’s just more time for everything.” But living at Antioch is also “really important on a symbolic level,” he said.

“For an institution keyed to the quality of community, it’s important for the leader of that community to be as present as other people. You can’t be a part-time participant.”

This is particularly true when many Antiochians remain fulltime participants in the life and future of the college, he said. “There’s such a high level of ownership among alumni,” he noted. “People are coming forward saying we may not have big bank accounts but we have our brains and our hearts and our hands and we’re willing to be of service,” Manley said. The main question alumni have for him, he added, is “How are you going to use us?”

The college has to have a way of fruitfully accepting the help — the boxes of ideas and the hands to unpack them — it receives, he said. “My response has been, ‘Well, we have to build the space to hold the painting.’”

Villagers, too, have been forthcoming with ideas, concerns and offers of help. “Everywhere I go [in the village] I’ve been recognized and engaged by people,” he said. This began even before arriving in Yellow Springs. Somewhere in the sky between Denver and Dayton, he was identified as “the new president” by his seatmate, villager and area chef Liz Valenti, and immediately engaged in lively “foodie” talk. (Manley is a confirmed food lover.)

Those light moments interweave with heavier ones. Manley said he recognizes that part of his job involves continuing the work, begun under his predecessor Mark Roosevelt, of healing the painful rifts and hurts around the college’s closing.

“There’s always healing to be done. We’re human beings,” Manley said. At the same time, he added, his primary orientation is toward the present.

“Only the present shapes the future, and nothing we do can change the past, though we might change how people think about the past,” he said. The college and community still need spaces for healing, he conceded, “and many spaces for moving forward.”