Two Yellow Springs residents are throwing themselves into the state political fray this year. Brian Housh is gunning for a seat in the Ohio House of Representatives and Matthew Kirk is making a bid for a recently vacated seat in the State Senate.

It is both candidates’ first time running for state office and their first time mounting a campaign of such magnitude. Both have quickly come to understand the amount of work it entails, as well as the expense: Housh was told that a candidate for a state representative seat has to raise at least $100,000 to mount a successful campaign. Nevertheless, with Republicans holding both houses, it’s a worthwhile fight to undertake, he said.

“I’m feeling pretty jazzed about running for public office,” Housh said. “It’s my vision to continue to make a difference.”

Running for office has been both a learning process for both candidates and the logical continuation of their careers and personal outlooks, they said recently. Both are running as Democrats, and both said they are eager to spend the 2–3 days per week in Columbus working with other state lawmakers. Being a state official is considered a part-time job, Kirk said, but that means that officials can spend more time in their home districts working on local issues. 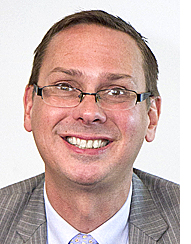 Housh, an environmental law attorney, is no stranger to mounting a campaign for political office, nor is he unaware of the myriad responsibilities public office entails. He is the Midwest policy manager at the Rails to Trails Conservancy, operations and marketing manager at the Little Art Theatre and has served for two years as a Village Council representative. He also has an MBA in social entrepreneurship. Running for another Council term wasn’t something he was planning on doing, he said, though he wasn’t sure what his next professional step was going to be.

But about a week before applications to run for state office were due — candidates have to submit an application along with 50 verifiable, party-specific signatures — Representative Fred Strahorn gave Housh a call “out of the blue” and asked him if he’d be willing to run for the district’s House seat. Given the preponderance of Republican voters and the fact that his opponent, Rick Perales, is an incumbent, Housh said he wasn’t sure if it was a challenge he was willing to accept.

“Honestly, my first response was, if I can’t win, I don’t want to run,” he said.

But five calls over the course of a week helped to change his mind, as did the fact that he has no opponent in the primary election. Housh thought it over and realized that his time in Council, where he tackles issues as complex as city water and policing concerns, gave him a solid enough background for voters to take seriously, and so he decided to go for it.

“I’ve learned an incredible amount and I’m ready to take it to the next level,” he said.

His core philosophy is one of bipartisan collaboration, he said, and he’ll be able to draw on his experience as a Council member to help facilitate this. Generally, he’ll apply his collaborative outlook to implement “innovative educational strategies” (such as project-based learning), emphasizing job creation and investment in infrastructure, and working to balance the budget.

Still, as it is his first state campaign, he had some help figuring out where to begin. The number of voters he has to appeal to are significant: there are between 50,000 and 55,000 voters in Ohio’s 73rd House district, which spans Yellow Springs, Bellbrook, Beavercreek and Clifton.

Housh attended a campaign training class held in Columbus designed to help candidates learn the “best practices” of running a campaign. The class covered name-building techniques, including old-school practices like door-to-door campaigning and how to strategically place signs.

“You kind of have to do signs,” he said, “even though they aren’t as effective as you’d think,” he said, a surprise considering the avalanche of signs that appear during election cycles.

Another boon for Democratic candidates, Housh said, is a very helpful piece of software called “Vote Builder.” Vote Builder provides a sort of road map that assesses where people are on the political spectrum, he said. It’s a database of voter information that even includes whether or not a voter likes to receive campaign literature.

Housh has also received help from friends and residents eager to be part of the campaign. A local designer has helped him design his campaign materials and fliers, and a number of friends joined him for an envelope-stuffing party, drinking wine and staying up until midnight getting together invitations to an upcoming fundraiser. And a very experienced friend is helping him manage his campaign and its contributions, to insure that things run smoothly and are on the financial up-and-up.

Taking further advantage of his local connections, a fundraiser at the Little Art Theatre is scheduled on March 15, and he said he plans on mounting similar fundraisers in Fairborn and other district towns soon. But he wants to add his own twist to them, he said. Housh said he wants to donate a third of any contributions he receives to area nonprofits, and both he and Kirk plan on campaigning and fundraising by bike once the weather gets nicer, reflecting their interest in active transportation.

To top it off, his campaign has a catchy slogan: “Housh to House.”

“This is the first time my name has worked for me,” he said. “It’s usually mispronounced, so it’s really great that it fits for the campaign!”

No trouble speaking up 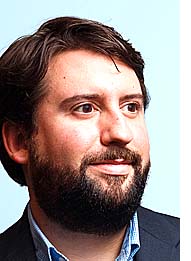 “I am running first and foremost because I am a reasonable person,” Kirk writes on his website. His platform includes “common-sense” Democratic principles, such as supporting reproductive rights, criminal justice reform and overall “improving the standard of living for all people and our relationship with the corporate community,” he said.

While Kirk, who has lived in the village for two years, has not held political office, he has done significant time working for two state government departments, which he says has given him great insight into how to be an effective and principled politician. Kirk worked for the Department of Taxation and then took a position with the Department of Development, in their business development office. Kirk also has a degree in urban and regional planning, and he said that the additional accounting classes he took have helped  him understand the dynamics of business development in the context of state government. Business growth is tied to an area’s economic and educational well-being, he said, and helping towns flourish in this regard forms the backbone of his political outlook.

As such, part of his plan as state senator will be more equitable opportunities for business development. Commodity farming — immense, subsidized growing operations of fungible goods — has worked against the smaller-scale local farmer, he said, and most business-funding opportunities tend to focus on small start-ups or corporate growth and not medium-range businesses. Business practices such as these don’t always provide significant jobs or revenues for the towns in which they occur.

“Politicians often push economic development hard because it makes for a good press release,” he said, “but development projects often happen in towns that are already fairly well-off.”

Redirecting economic development toward these sorts of businesses, and in towns that need the economic help, is something that he hopes to accomplish as a state senator.

Yellow Springs is the hometown of his wife Kristina (Thompson), and the couple and their young child moved here after living in Columbus for a number of years. Like Housh, Kirk had not initially considered running for office, but he noticed that the Democratic seat was open and called the state senate caucus and expressed interest. He met a senator at the Clifton Mill, “had a nice breakfast with him,” and was given the go-ahead to run for the seat.

While Housh is running unopposed in the primary, Kirk does have a contender for the seat, Michael Sergio Gilbert. Although there are two Democrats vying for the seat, Kirk said he was surprised at the lack of a political machine in District 10, which is what he’ll hopefully be representing.

However, Kirk said his campaign will be bolstered by the fact that he has “never had a problem speaking up.” Working from the middle of state bureaucracy isn’t necessarily conducive to implementing the changes he’d like to see, so he is using his skill at speaking up and applying it to the larger public arena. Plus, he said, his relatively young age, 34, may work in his favor, reflecting the fresh ideas of youth and the eagerness to put them into play.

Like that of any budding politician, his campaign takes a lot of grunt work.

With their ideals firmly in place, the two villagers are embarking on an admittedly challenging odyssey.

One of the difficulties that both candidates face is the fact that this year will also host a presidential election, which can overshadow elections for other offices. Nevertheless, the drive to change and their sincerity in the belief that they have something to offer their fellow Ohioans encourages their campaigns. Plus, any effort to help Democrats regain control of the House and Senate can only be a good thing, Kirk said, as is anything that will “help keep Trump out.”

And, of course, once the campaign really gets heated, the candidates will face the pressures of being figures in the public arena. Already the candidates have answered numerous questionnaires from special interest groups, quizzing them very specifically on their stances on issues divisive and pedestrian alike.

Housh said he hasn’t been the subject of any mudslinging yet, but that is a possibility.

For more information, visit houshtohouse.org and kirklovesohio.com. Ohio primaries will take place on March 15. The general election will be on November 8.