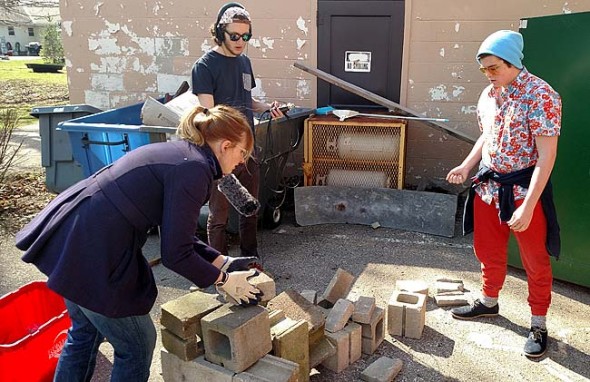 Photo by Dylan Taylor-Lehman
Corrie Van Ausdal, Tom Amrhein, and Sam Butler recorded sounds, or foley, at WYSO for the podcast “Zombie High School.” The podcast features all local talent and chronicles the adventures of high school students stuck in detention when the zombie apocalypse happens. “Zombie High School” enters the land of the living in mid-April. (Photo by Dylan Taylor-Lehman)

From the sound of it, the zombies in the recording booth were as gruesome as they come. But what began as inhuman snarling into the microphones quickly turned into laughter. Once one zombie laughed at the sound of his own voice, the rest followed, trading their moans for snickers.

The troupe is not actually a chorus of the undead but the actors behind “Zombie High School,” a six-part podcast written, produced and performed by local talent. The podcast has been in production since January and is close to wrapping up. The actors were recently in the WYSO studios to re-record some lines and sound effects — the zombie moans were the result of growling through toilet paper tubes.

“Now that we’re all warmed up in a really weird way, does anybody need a glass of water?” asked Corrie Van Ausdal, the podcast’s director, at the start of a recent recording session.

The actors cleared their throats and prepared to act with their human voices. Zombie gurgles, bored sighs, exclamations of pain — all in a day’s work.

“Zombie High School” is the brainchild of Van Ausdal, a local writer, musician and now podcast director. She and three writers wrote the podcast, which tells the adventures of high school students stuck in detention when their town is suddenly overrun by the living dead. According to the press release, the unlikely band must secure the school, maximize their resources and transcend the borders of their teenaged identities to save themselves and possibly all of humanity.

Ara Beal, one of the podcast’s producers, approached Van Ausdal to head the production in part thanks to Van Ausdal’s skills as a playwright. YSKP produced a play she wrote called Godzilla in 2012, and Beal asked her about any new ideas she might have kicking around for a podcast. Van Ausdal brainstormed a bit and settled on the idea of a zombie story told through the eyes of teenagers.

The tale of “Zombie High School” will be chronicled over six episodes, which run from 15 minutes to over half an hour in length. The podcast is a collaboration between YSKP and WYSO, and was partially funded with a grant from the Ohio Arts Council. The podcast is being scored by local musician Sam Salazar, and the cast is primarily composed of high school students.

The subject matter was chosen because it resonates, according to Van Ausdal. The “zombie vs. survivors” theme highlights the indomitable human spirit, she said, and it’s fun to imagine what a world beset by necromantic disaster would look like. But the theme is also a riff on the trials of growing up — both zombies and teenagers are at the mercy of strange physical changes outside of their control.

The cast and crew found that producing “Zombie High School” was a challenging endeavor. Everything was a learning experience, from creating gross sound effects to rewriting scripts on the fly. Producer-engineer Tom Amrhein had some experience working in radio as a volunteer on the WYSO program “Kaleidoscope,” but podcast production was a new medium for most of the people involved.

Coordinating everyone’s schedule was one of the biggest challenges, said Van Ausdal. She and Amrhein created an enormous spreadsheet that mapped the story arc against the projected recording schedule and the availability of the actors. Some of the zombie cast was acting in YSHS’s production of “Footloose” at the same time. Actors would rehearse all day and then come in to record the podcast in the evening, sometimes while in full Footloose makeup. One actor was on the winning Bulldog basketball team, and others were periodically knocked out of commission by seasonal illnesses.

The production was also a new experience for the actors, as most had primarily worked on stage or television productions. Voice acting is an entirely different approach, said Van Ausdal, as actors have to be cinematic without the benefit of  visuals. Working in the recording studio took some getting used to.

“I had to record a scream and I about shattered Tom’s ear because I’m so used to projecting,” said actor Shakinah Williams, a student at Fairborn High School.

Sam Butler, a 2015 graduate of YSHS, said he heard about one minute of playback and cringed at the results.

“In my head I sounded cool, suave like Dean Martin,” he said. “I have a higher-pitched voice than I thought.”

A certain actor, whose name won’t be mentioned in the interest of not giving away any plot surprises, had to rerecord his death scene during the recording session this past weekend. The team was trying a few different approaches, as the impact of a fatal blow hadn’t yet been conveyed with enough misery.

“It hurts just acting like I’m getting killed,” the actor said.

The actor, a little bashful about going all out in the studio and perhaps a little worried about hexing his own mortality, was encouraged by his fellow actors.

“Maybe you should try hitting yourself in the stomach as you do it,” Van Ausdal suggested.

“Comedy is easy, dying is hard,” she said.

The podcast also called for a host of unnatural sound effects, all of which were created from scratch.

“Old radio dramas had sound effects for footsteps and creaking doors, but sounds of the zombie apocalypse are not common,” said Amrhein.

Matt Minde (also a graphic designer at the News) was tasked with foley duties, or creating the sound effects. Figuring it out was a lot of fun trial and error, he said. What does a zombie being hit with a fire extinguisher sound like, for example? As Minde found out, it sounds a lot like a watermelon being hit with a full metal water bottle.

“The podcast has a preponderance of terrifying sound effects,” Minde said. “Where are the bunnies and birds chirping?”

The team was engaged with producing an especially challenging sound effect on Sunday, that of a van driving through a brick wall. They were out in the WYSO parking lot with a stack of cinder blocks, some pieces of metal and a bucket full of broken glass. They pushed over the blocks and dropped metal in different sequences, trying to capture the nuances of metal hitting brick. Their attempts didn’t quite have the oomph of a proper impact, so Minde went to get some trash cans to bang into the tower of blocks.

A satisfactory crunch was eventually achieved, but recording outside had its own perils. Amrhein listened back to the sound he just recorded.

“No, the kids playing basketball are not in the background,” he said.