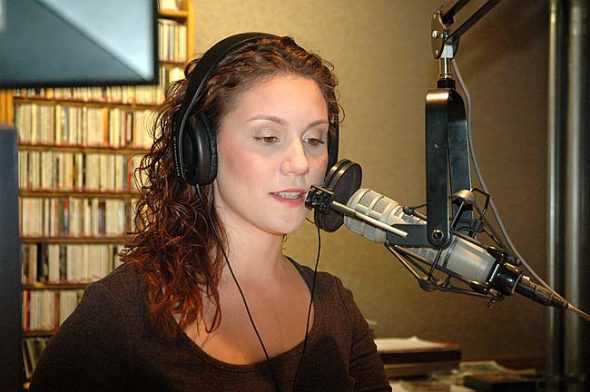 April Laissle, 23, is WYSO’s new morning on-air host and news reporter, filling the vacancy left by Ariel Van Cleave. She came to the station from WOUB Public Media in Athens, after graduating from Ohio University in 2015. She called her new position at WYSO her “dream job.” (Photo by Carol Simmons)

A new voice on the air at WYSO

“This was my dream job,” April Laissle said of becoming a news reporter and morning on-air host at WYSO radio in January.

Laissle (pronounced “Leslie”) filled the WYSO morning vacancy left this past fall when Ariel Van Cleave took a job with NPR affiliate KPLU in Seattle. Laissle came  from WOUB Public Media in Athens, where she was a reporter and weekend host. A 2015 graduate of Ohio University, the 23-year-old learned radio work as a communications student at the university and an employee at the combined NPR-PBS station.

“I knocked on a lot of doors and bugged people to let me on the air,” she said of the WOUB experience. The rural station has a 55-county coverage area in southeastern Ohio, Kentucky and West Virginia, she said. As a general assignment reporter, she explored such weighty issues as food security and covered such regional events as a 4-H chicken competition.

The Antioch College-owned WYSO was well known to Laissle’s WOUB colleagues. Its reputation as “the little station that could” and the work being done by its newsroom garnered deep respect among other radio outlets, she said. She aspired to be a part of its team.

Working for an expert radio journalism veteran like Station Manager Neenah Ellis “is really great when you’re trying to improve,” Laissle said. But even more significant, “It’s really good to have that kind of leader in the newsroom.”

Laissle, who grew up in Orlando, Fla., said that her interest in journalism began in her ‘tween years. Her parents were “news junkies” — they read the local newspaper and they listened to NPR. “I remember listening from the back seat of the car,” Laissle said. “I loved the stories.”

As a teenager, she not only wrote for her high school newspaper — a story on water quality stands out in her memory — but she also attended journalism camps in the summer. “I got the feel for journalism,” she said.

A full scholarship to Ohio University, where her older sister was a theater tech student, brought her to Athens. “It was great,” she said of the training she received there.

“I knew I wanted to do this,” she said. So in addition to her regular coursework, she took vocal lessons to improve her on-air delivery.

“I knew I talked too fast,” she said, citing one area in which she focused. “It takes a while to get used to listening to your own voice.” Through practice, she “got comfortable in front of the mic — now it’s second nature.”

During her junior year, she worked as an intern at KQED Public Radio in San Francisco, where she focused on health reporting.

There, she also “learned to talk to people on the air and how to write stories on a deadline.” She also experienced life at a large city’s station. “It’s so different being in a big station. Three people were doing my [current] job. It’s a big dance.”

At the same time, she began working on The Broad Experience, a podcast about women and workplace issues hosted by New York-based journalist Ashley Milne-Tyte. “I learned a lot — I got to listen to a lot of different interviews.”

Her first day on the job at WYSO was Jan. 11, and her first day on air was the 20th. Those first days were spent training and shadowing Managing Editor and Business and Economics Reporter Lewis Wallace.

Being a morning host is a new experience for Laissle. In her first weeks she arrived at the station by 4:45 a.m., though she said she no longer holds herself to that strict standard. Still, she said: “My goal is to sound as calm and collected as possible so listeners start their day off on a good note.”

The rest of her time is spent reporting and preparing news and feature stories for air. The station broadcasts to a large swath of the Miami Valley, meaning its coverage area is large and diverse. “A reason I love this so much is that it’s different every day,” she said.

Her goal is to complete three or four stories a week, and a recent focus has been on policing issues in the area.

She said that finishing her work day by 1:30 p.m. also gives her the opportunity to get to know the area. She said she spent the winter adjusting to the new job, and now she’s looking forward to getting out and about. “I’m excited to explore Glen Helen.”

Her interests include travel and cooking. She’s currently living in Fairborn, but would like to find a place in Yellow Springs. Her sister ended up in Syracuse, N.Y., and her parents are still in Orlando, but they listen to WYSO online.

“They contributed during the pledge drive,” Laissle said of her folks.

Radio “is magic,” she said. “You can visualize things in a way — I don’t think — you can as well in any other medium. The stories, for me, come alive through sound.”