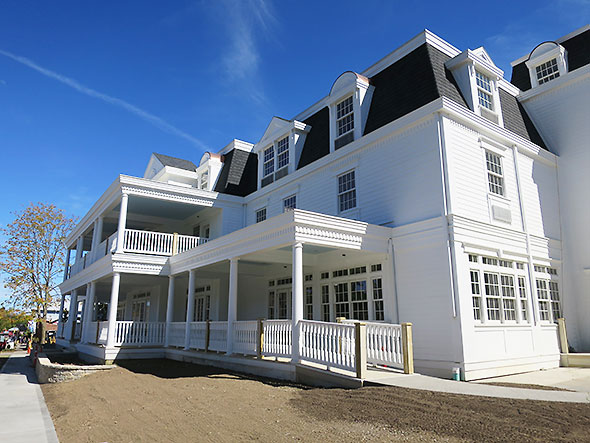 Today we step back into time… 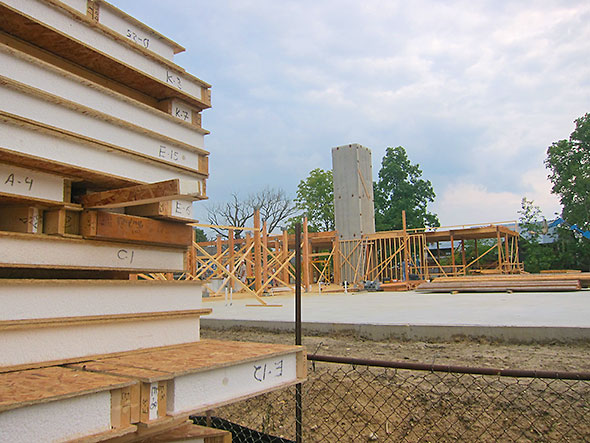 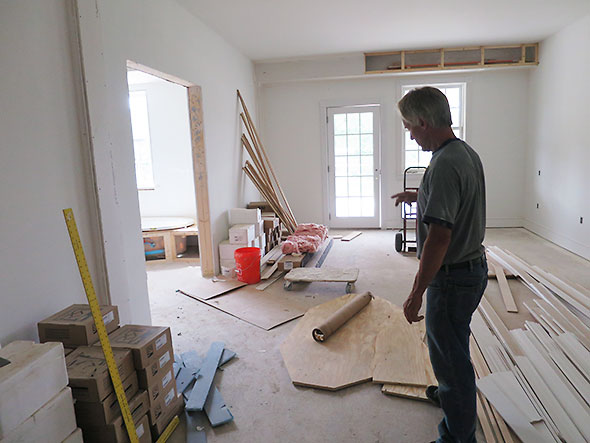 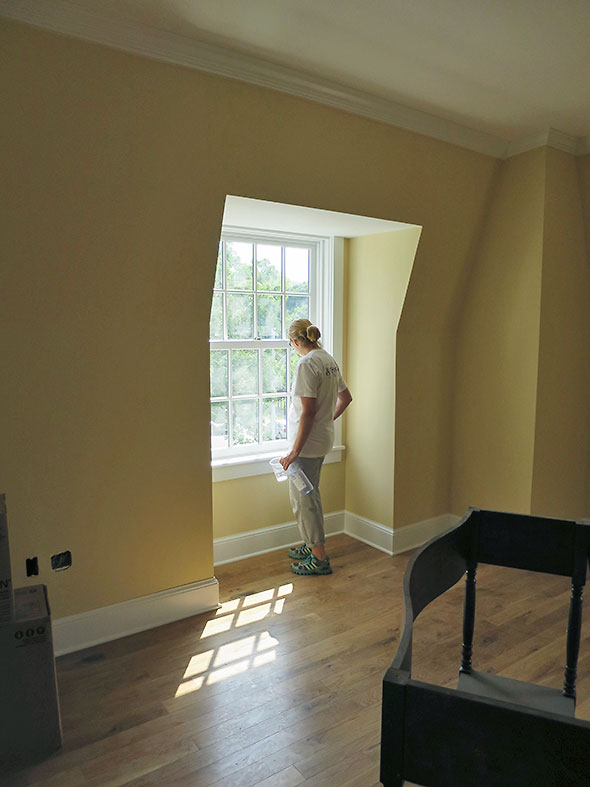 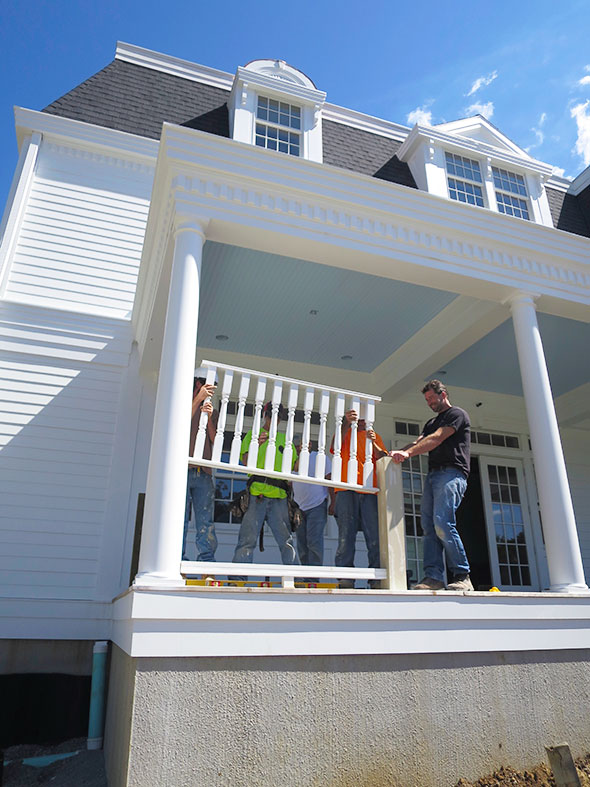 …to witness the transformation of the Mills Park Hotel from spark to multifaceted gem.

First, the spark. The Barr House stood at a point of transition for nearly a decade. Built by William Mills in 1840, the house was bought by Rebecca Bell Thompson seven years later and passed through her family until 2005. The Morgan Family Foundation purchased the property from Bell Thompson’s great great granddaughter shortly after the foundation’s formation. Several hundred thousand dollars were spent exploring plans to develop the downtown asset: an arts center; a senior center; a senior housing project. The senior housing project advanced the farthest to the point where the Morgan Family Foundation transferred the property’s deed to the Friends Health Care Associates in 2007. Grants were submitted and, though competitive, the proposals did not garner the necessary resources in a timely manner. Meanwhile, the Hammond family stepped forward and expressed interest in developing the property themselves; they purchased the property from Friends in September 2012. 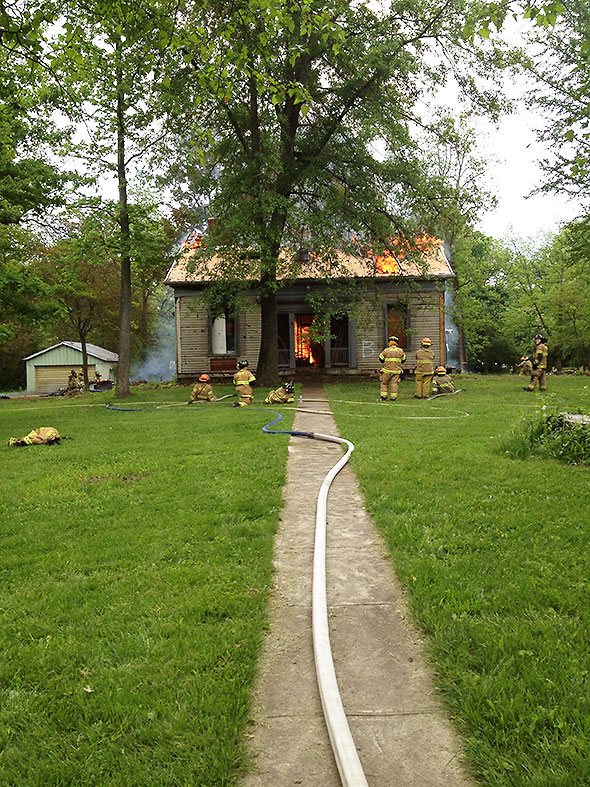 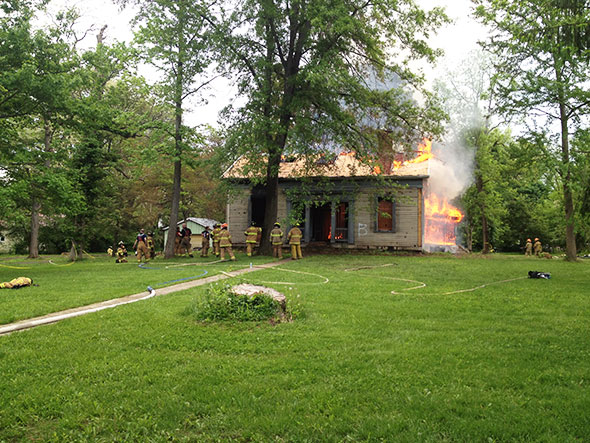 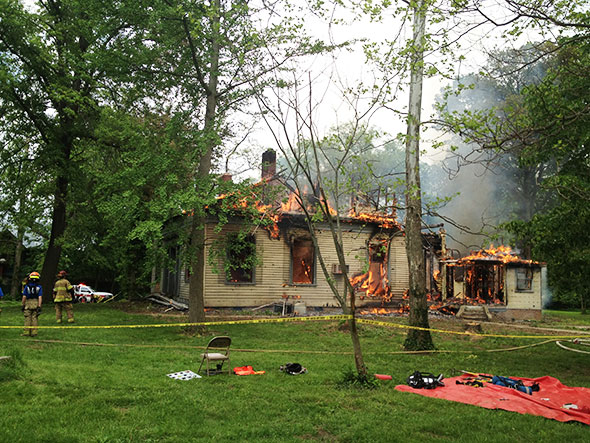 The Grinnell Mill established Jim Hammond’s interest and expertise in historical restoration. However, the Barr House had issues. It sat in an uncertain state for seven years, and rot had set into its timbers. Removing the building seemed to be the wisest course. First, items of historic value were removed from the house and then, after remediations for lead paint and asbestos were complete, Barr House was taken down in May 2013 in a controlled burn conducted by the Miami Township Fire Department. 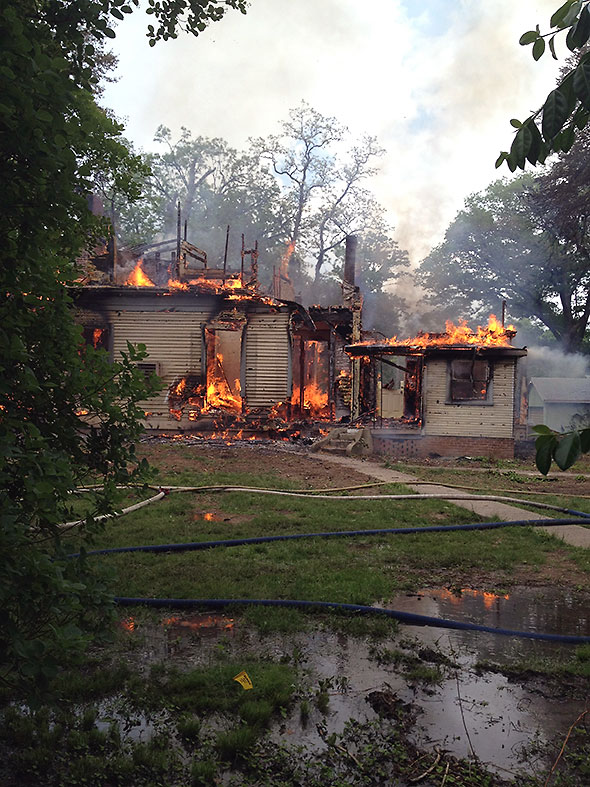 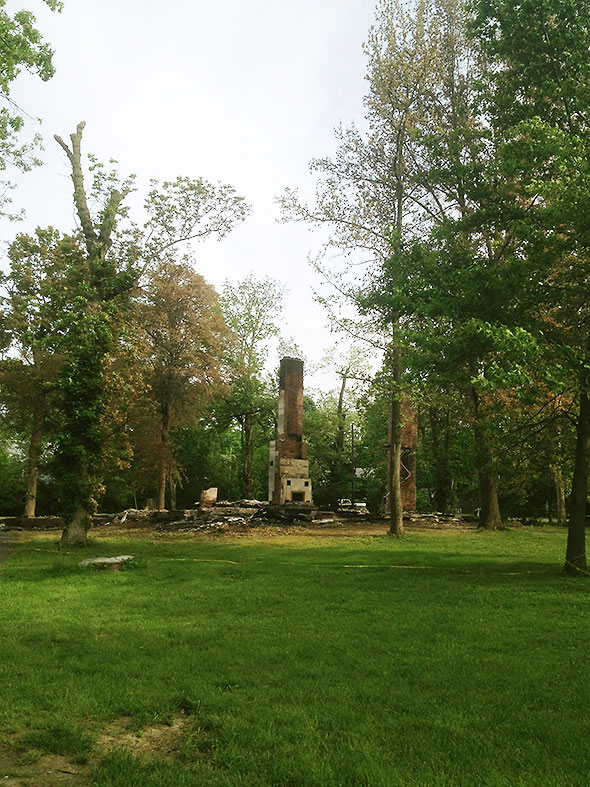 It was Sunday. I remember the day well. The family was returning from the 2013 Tar Hallow Camporee. We approached Yellow Springs from the south east. Outside of Cedarville, we spotted the rising column of smoke. When we arrived on scene, the fire was still contained within the house…a burning red heart in the center of an emerald green field. By the end of the day, only the chimneys were left standing, columns of bright red bricks and mortar arranged neatly on the slab foundation. 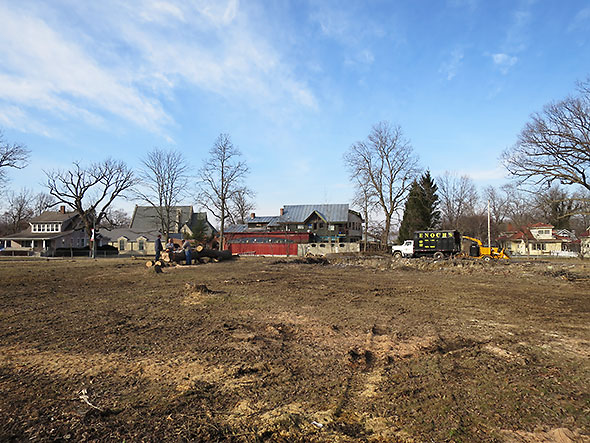 Over the next year, the lot was cleared and prepared for an ambitious construction project. Architectural plans were placed for public inspection at the reference desk in the Yellow Springs Community Library. The plans detail a three story hotel with an adjacent banquet hall. The 28-room hotel occupies the western side of the lot in essence extending downtown Yellow Springs another half block. The architectural plans are based on a house of local significance. In the mid 1800s, William Mills purchased a track of wilderness north of Cincinnat, land just west of a glen and a natural mineral spring rich in iron ore. Mills carved out parks and roads for homes and business. The Mills Lawn School now stands in the park where William Mills built his home in 1843. The Mills home itself was a beautiful three story building whose architectural facade was remodeled in the 1870s in the Second Empire style by a new owner. The remodeling fit the house with a large welcoming porch and third story dormers. It came down in 1965 having succumbed to moisture damage much like the Barr House. 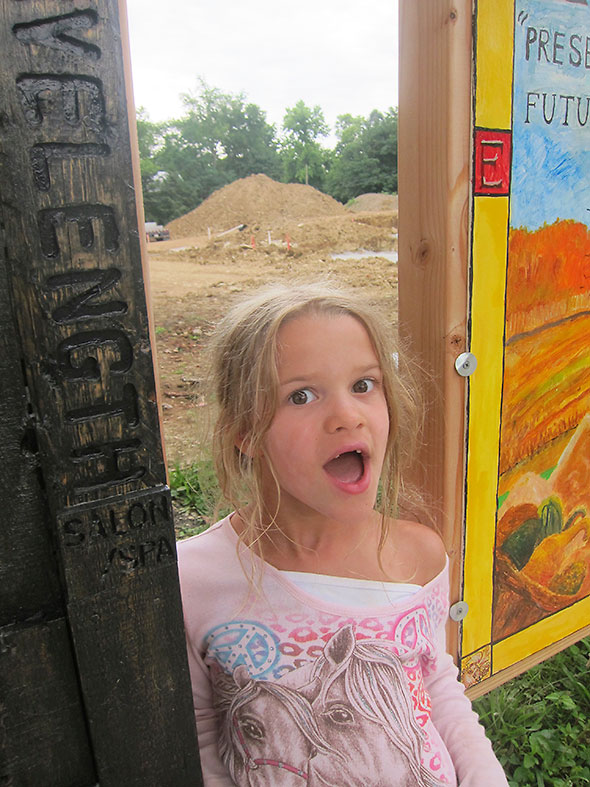 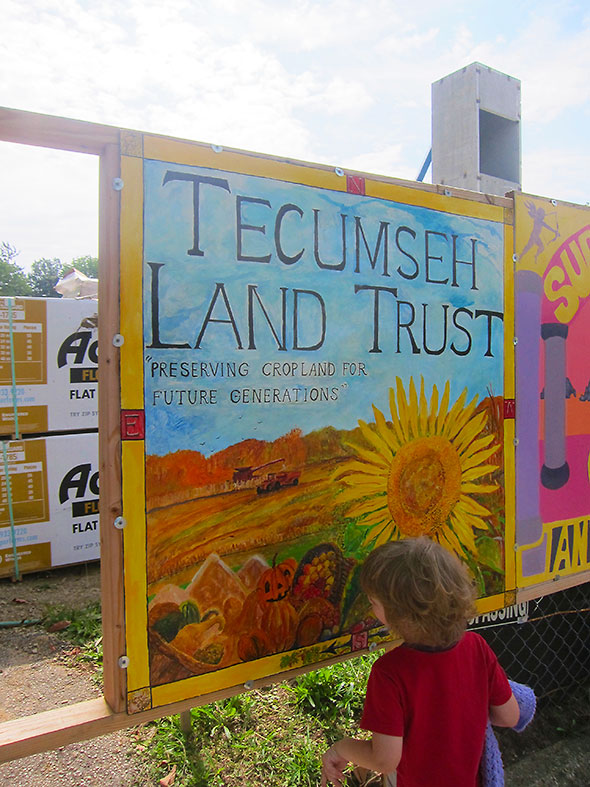 About a year after excavation began, the chain metal fence that encircled Barr House was replaced. Or rather altered. Wooden frames were added along Xenia Avenue and, for the summer of 2014, the facade to the construction site served as an outdoor art gallery. Village businesses and nonprofits sponsored the 4 foot by 4 foot murals—55 in all—by area artists. 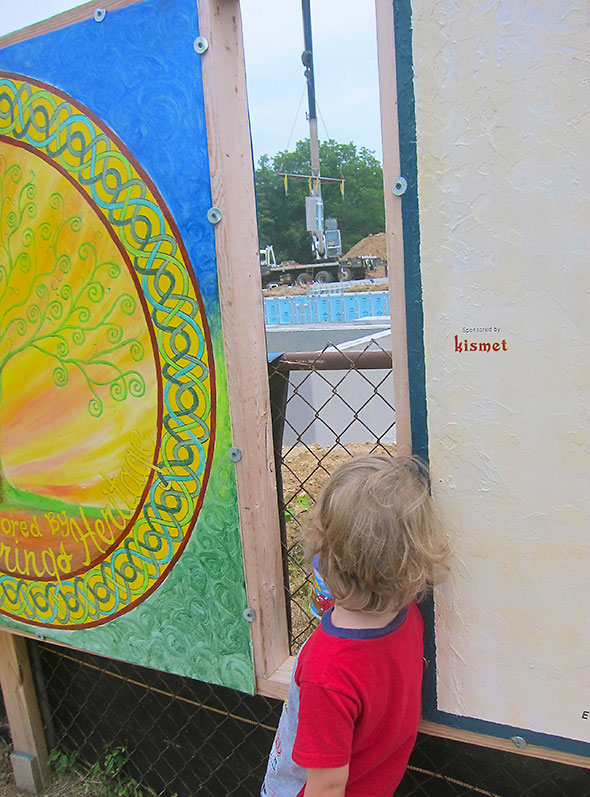 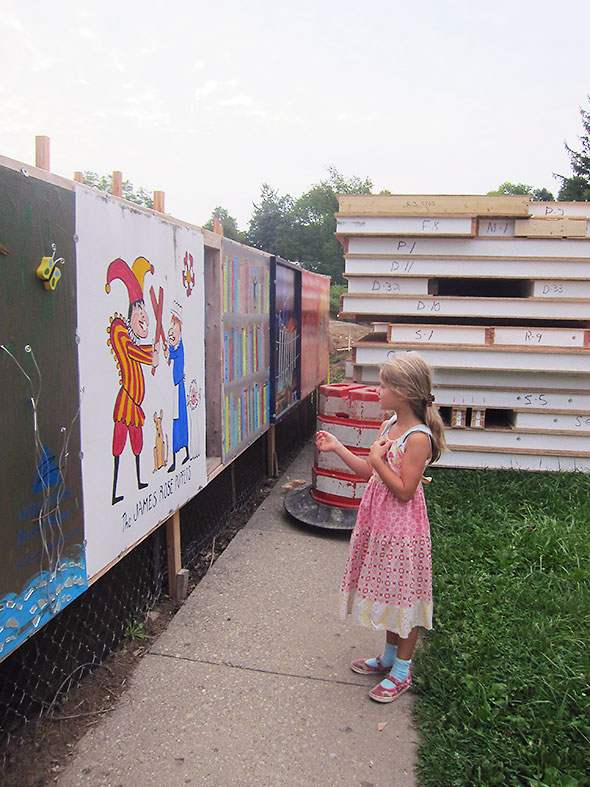 The mixed media murals included a hand-carved wood model of the hotel by Paul De La Verge, a yellow-bellied warbler by Travis Tarbox Hotaling, and a wood cutout by Sherraid Scott for the Yellow Springs News. 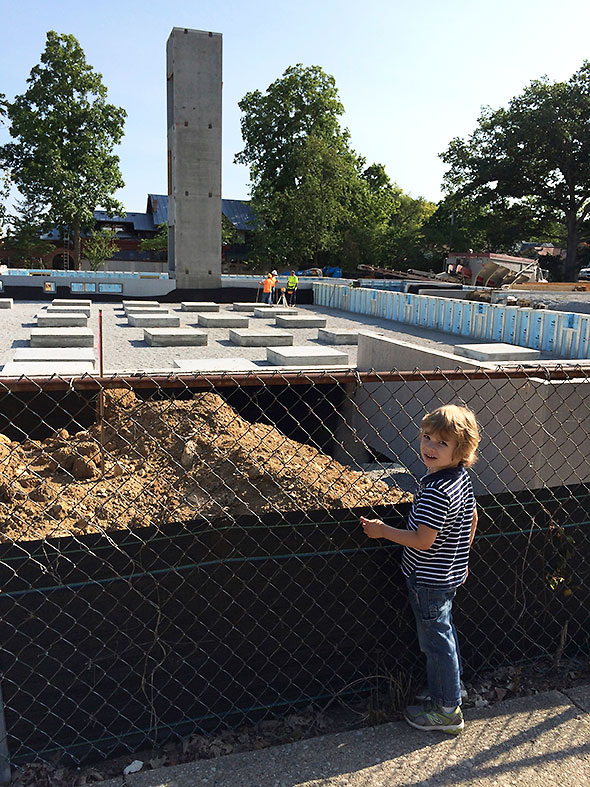 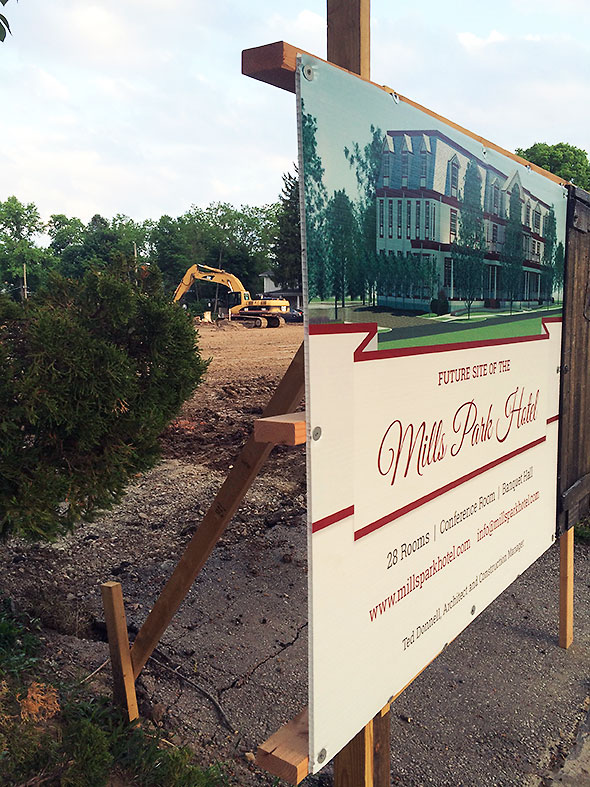 Robert Frost once said that good fences make good neighbors. The art fence was a mending wall: It improved the look of the site; more importantly the project involved a big chunk of the community. Many of us were reeling from the loss of the historic house and green space. We met at the art fence to both mourn and delight. 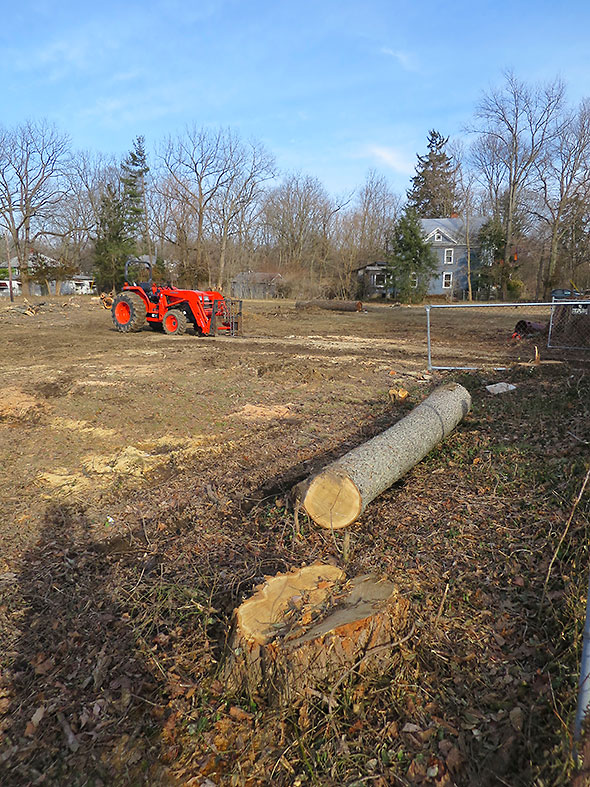 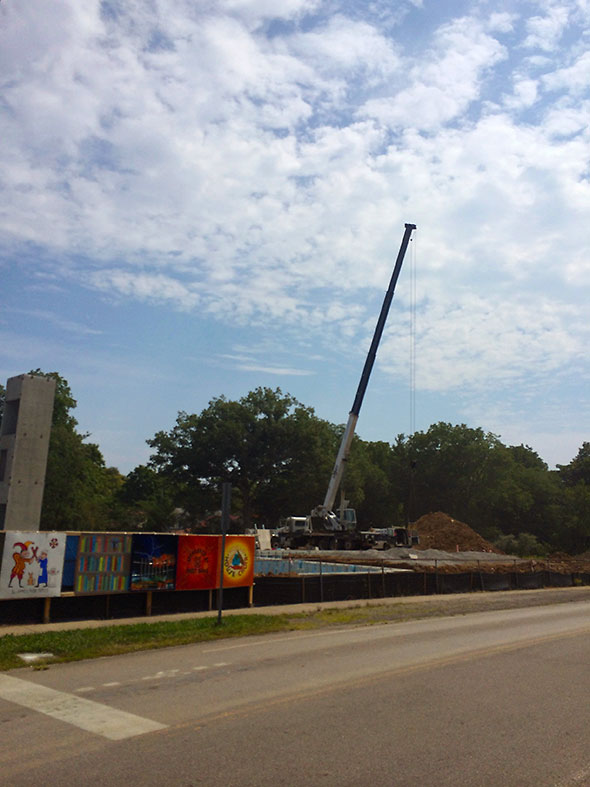 Untethered to the past, my son was delighted by what he saw beyond the fence. Fire-red tractors and gigantic cranes moved into the space, removing debris and trees, digging up dirt, delivering gravel, and pouring foundation. The crews saved wood recovered from the field for furniture, trim, etc but several trees were almost as blown out as the rotting timbers in the Barr House. 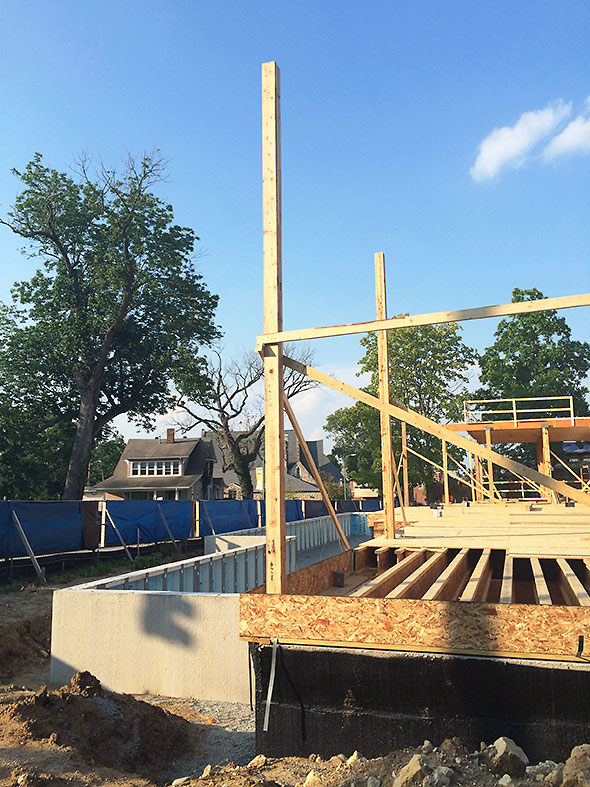 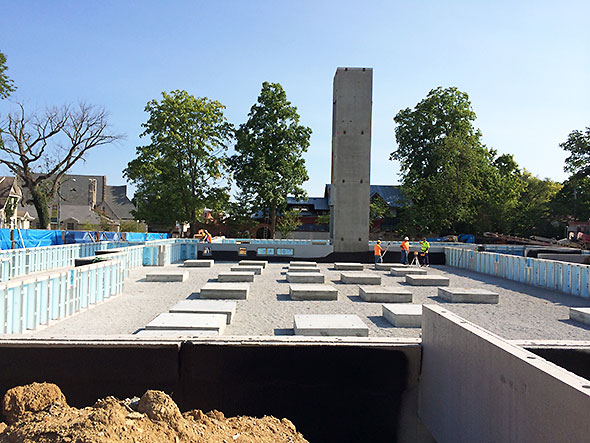 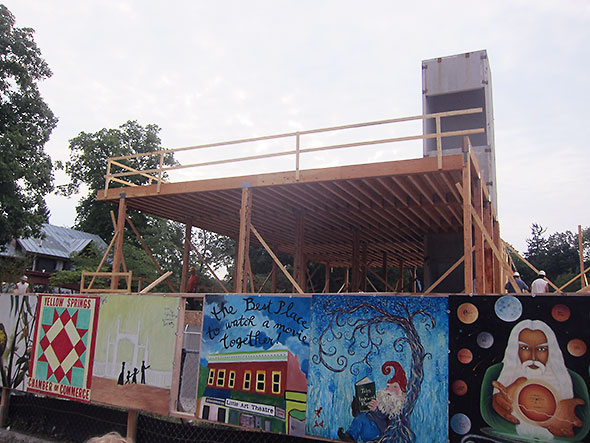 By the end of the summer, the brick chimneys of the Barr House were replaced by wood frames and a tall elevator tower. These structures shot up from the white/blue pools that housed the underlying infrastructure. Walls started going up at the end of that summer. The basic facade of the hotel was in place a little more than two years after the Hammond’s purchase. 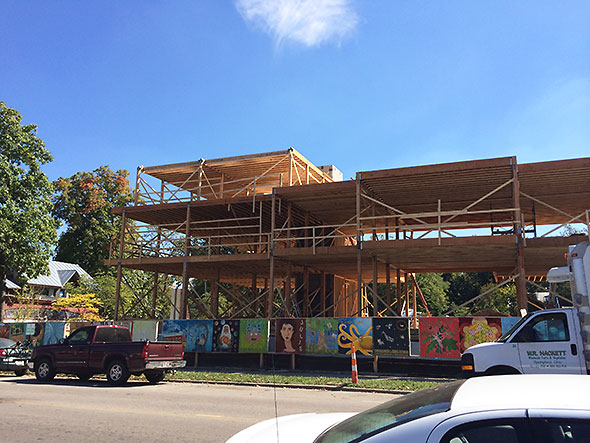 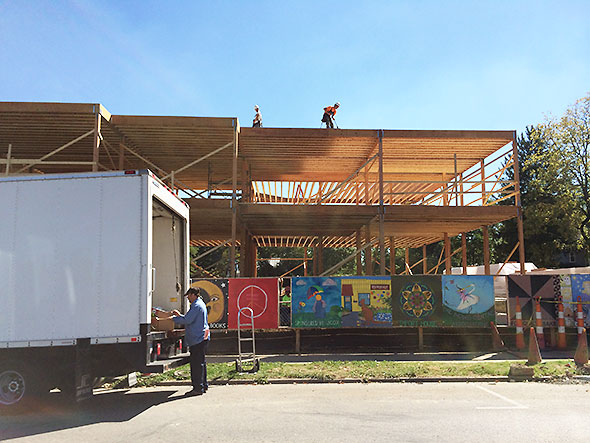 The outline of the hotel with its cutouts for many windows was now visible but briefly. Around Halloween 2014, the building was wrapped in Greenguard Max. The bright green sheets provide an insulating barrier against both air and water thus providing moisture protection and energy efficiency. The hotel will thus be guarded against the water damage that undermined the Barr House and Mills House. The building wrap also represents the Hammonds’ commitment to building one of the most energy efficient hotels in the country. 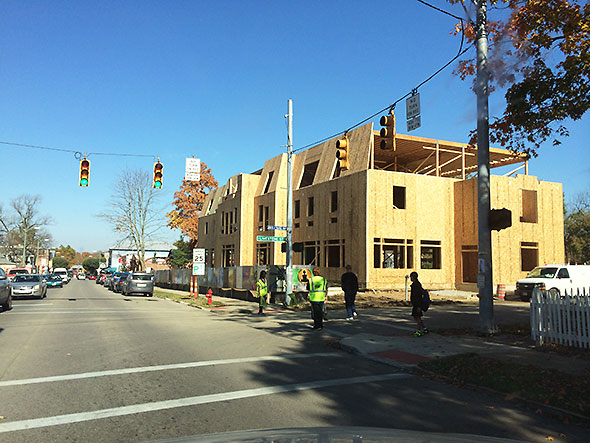 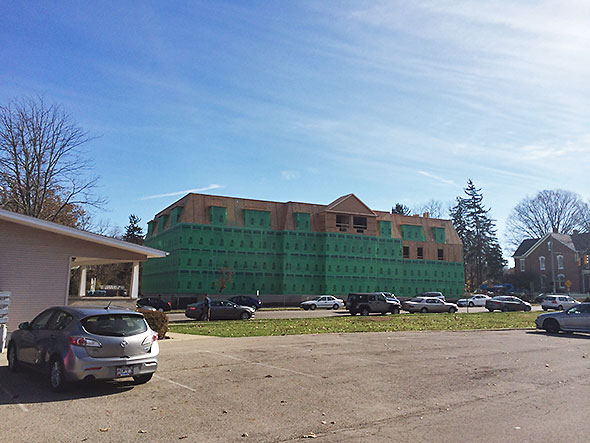 We will continue the story of the Hammonds and the Mills Park Hotel next week. The basic block of the hotel and its infrastructure have been established by the fall of 2014. Now, the intense detail work begins.