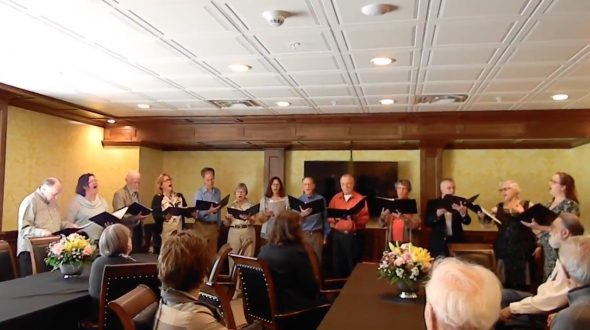 The long-awaited and much-discussed Mills Park Hotel looked quiet amid the bustle of foot traffic down Xenia Avenue on Sunday, April 24 — at least from the outside. Behind the building’s French doors, around 40 people gathered in the afternoon to celebrate the 82nd birthday of Ron Siemer, a 40-year resident described by friends as “everybody’s favorite octogenarian.”

Siemer’s birthday was celebrated in musical fashion by local choral ensemble Vocal Vortex, of which Siemer is a member. His family, who came from out of town to celebrate Siemer’s 82 years, were the first registered guests at the new hotel, thus fellow Vocal Vortex member Mark Munger thought a brief birthday concert at the hotel would be the perfect way to honor the milestone. The 13-member vocal group — Lori Askeland, Fred Bartenstein, Dianne Foubert, Jennifer Gilchrist, Flo Lorenz, Amy Magnus, Munger, Ned Oldham, David Seitz, Siemer, Kathy Stockwell, Tamsin Trelawny-Cassity and Mike Zwart — performed a four-song program (concluded by an audience sing-along of “Happy Birthday,” of course) in the hotel’s conference room.

Vocal Vortex was formed in late 2014 when Munger and Siemer heard world-famous men’s chorus Chanticleer sing “Calling My Children Home,” a song written and performed originally by country and bluegrass group The Country Gentlemen. The song inspired the two to form their own vocal group. As Siemer said to the assembled audience after the Sunday performance: “It occurred to us that there were at least a dozen people we could call up in a day and see if we could do that and … get any kind of satisfaction out of it.”

When asked if Munger and Siemer consider themselves the group’s founders, Munger said, “Every one of the folks in this group are the founders. … If you take one person and pull their sound out of that group, you can tell right away there’s something missing.”

Siemer agreed: “This music group is … interesting,” he said, to much laughter from the audience.

Click below to hear a clip of Vocal Vortex singing “Calling My Children Home,” and take a look around inside Mills Park Hotel.

(And click here to watch Vocal Vortex’s full program from the afternoon.)