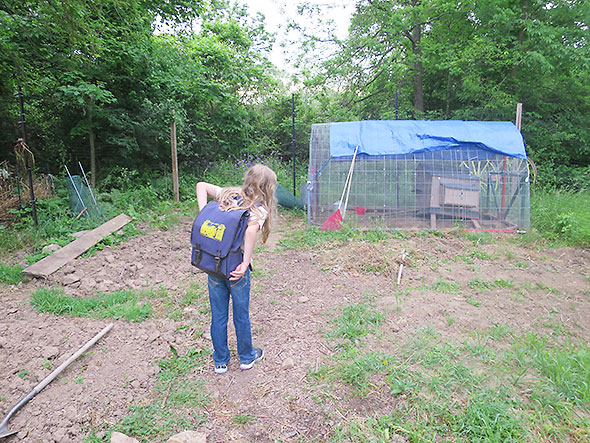 My daughter has discovered radio. We set her up with an alarm clock a couple of months back and, since then, she’s taken command of her morning routine. The radio wakes her now at 7am…at a volume that shakes the walls.

She tunes into Channel 99.9 staking her flag firmly apart from her parents’ preference WYSO 91.3. When I was young, the radio in our house turned to a similar station out of Binghamton. The Whale…WAAL 99.9…served me as both best friend and bellwether. No matter my chore or vocation, I was keenly tuned in. It would cued me in to the very moment that the weekend arrived. The station would cue up Bruce Springfield and the E street Band and blast out the anthem Born To Run.

Excruciating loud music isn’t quite enough to bounce my daughter out of bed, but she has further reason to rouse herself. This week she graduated from the Younger Group at Antioch School and accepted the responsibility of looking after the school’s chicken for the first week out of school. The past two days, she’s been up, dressed, and out of the house prepping her bike without a single word from her parents.

Not that she’s completely independent. She biked as far as Allen Street yesterday when she lost her balance. A neighbor helped her right herself and she came back to the house for a bandaid and hug. We went back to the school together and opened the coop. My daughter pulled out a large egg with a green blush from one of the nesting boxes before we headed north to the Farmers Market downtown.

This morning, we had a bit of a shock awaiting us. The coop had fallen to one side off its stilts from the night before. The chickens cooed inside apparently fine. I attempted to figure out how the structure had been displaced while my daughter checked the grounds. The coop had recently been moved to a new spot so I thought at first that one of its legs had failed. Then my daughter called out from the parking lot that she saw a ground hog sneaking off from the scene. I took a turn around the coop and sure enough found freshly dug holes under the fence. We’ve sent a call out to the Calvary to figure out how to secure the birds fortress. For the time being, I’m keeping company with the hens as they scratch about the garden.

Jeremy and I saw Bruce Springsteen in concert just last month. For me, the concert was the realization of a decades’ old dream. The tickets, the babysitter, and the midweek pilgrimage to Columbus were a major investment, but how could I pass this up? Here was my chance to hear the Boss tear thorough the emotional landscape of The River.

Jeremy had taken me to see Rush his favorite band since he was a teenager. So here was my chance to return the kindness. Jeremy bonded to Rush in his teens like I connected with the E Street Band. I have listened to The River full through many many times and know its songs by heart. At the concert, Bruce Springsteen took us back to the time when he first recorded the album. He exposed the emotions that fueled the making of the music turning over the restlessness and angst he felt in his twenties and . Accompanied by the E Street Band, he played the songs through in order, letting the music burn through our memories and taking me back to that time in my early teens.

My husband was amazed by the concert. He experienced the full force of the wall of sound that Bruce and his band of discipline musician build and reinforce over four hours. Bruce won over a new fan that night in Jeremy. The words of his music also tested a tried and true fan.

I was thirteen when The River was released. Thirteen…my first year as a teenage and the age of my first friend who became pregnant. “She seemed like a nice girl” became a phrase that I learned hate. The supercilious phrase is a curt dismissal, a too-easily proffered judgement both terrible and wrong.

The River treds this very ground. Several songs speak in the voice of young men who feel cornered by the responsibility of an unplanned child. I thought about how much this album shaped my sense of worth but what about the sense of shame expressed in the songs? Did these words do damage also?

So many movies and songs from my youth speak me now. As our conversation matures around consent and autonomy, it’s worth taking the time so see where we were then in the 1980s and what conversations propelled us forward and which ones did not. The answer is complicated with The River. It’s dark and winding passages finds some of its inhabitants still lost some perhaps irrevocably. Others though strain against their confines and strive all the harder to get to that better place.

We’ve now got the chicken coop lifted back in place with concrete blocks now holding above the ground. We’re dropping stones in the holes where the ground hog gained entry and patching other weak spots where we find them. Will the chickens be safe this weekend and into the summer? We don’t know but we know they are worth our efforts. We’ll be waking up early all this week. When we do, our hearts will rise in our throats until we see see how the elements have tested our feathered friends’ fates and our careful efforts.