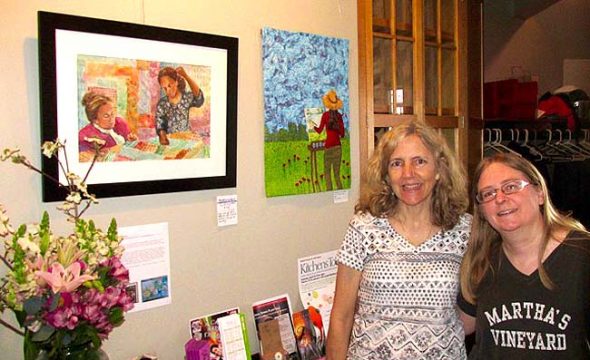 Watercolors by Libby Rudolf, left, and art quilts by Pam Geisel are on display at The Winds Cafe. An opening reception for the artists will take place this Sunday, May 15, from 4:30 to 6:30 p.m. (Submitted photo)

Libby Rudolf always has her “art glasses” on, as she seeks images in her daily life that she’ll later turn into paintings. Most often, those glasses land on scenes from the natural world, her family, her town, or people interacting with each other.

“I paint what inspires me, what makes me happy,” she said in a recent interview. “I try to paint joy.”

Thirty-nine of Rudolf’s joyful works are currently on display at The Winds Cafe in “Color and Light — Brush and Needle” an exhibit of her watercolors. Also on exhibit are art quilts from local artist Pam Geisel, which are exhibited in the bar.

Rudolf’s work includes paintings of sunflowers, dahlias and hepatica, tadpoles, the full moon in Yellow Springs, the wilderness near Lake Tahoe, a harbor and a sunset in Maine, peaches on the vine, grapes in a vineyard, and several scenes of the village, including the Riding Center, Grinnell Road leading to the mill, and trees in fall. And several paintings show scenes from Belize, where she and her husband, Dan, recently visited.

“I love to see people engaged in their environment,” she said of the Belize paintings.

And an outlier in the group shows two moose grazing in a yard, a scene that Rudolf witnessed when visiting relatives in Wyoming.

Most of the work in the Winds show is new, and Rudolf has been busy the past several years producing work to keep up with her exhibits. This is her third solo or shared Winds exhibit. She has also had solo shows at the Yellow Springs Brewery and the Emporium, and been part of a group exhibit at the Springfield Art Museum. And in the fall a solo show is scheduled at Seasons restaurant in Springfield.

From these shows, many of her paintings have sold.

“It’s exciting and fulfilling to produce work that people appreciate and even want to acquire,” Rudolf said.

Rudolf doesn’t have a single word to describe her painting style, which has become looser and more impressionistic in recent years. While she has painted in a variety of mediums, Rudolf currently favors watercolor, which she appreciates for its “luminesence” and versatility.

“You can be so delicate and so bold at the same time,” she said.

Rudolf came to her love for painting early, and carries fond memories of enchanted childhood mornings spent painting with her grandmother, who was a painter herself, while classical piano music played in the background.

“She was an inspiration,” Rudolf said.

While Rudolf studied art in college in Washington, D.C., she didn’t major in the discipline, and since then she’s held a variety of jobs, such as travel agent, assistant manger of a fabric store and farmer of sprouts. Most of her attention went to “kids, horses and goats” at the small family farm on Grinnell Road, where she and her husband, Dan, raised three children. Now that the children are mainly grown, Rudolf has returned to her first love of painting, and she appreciates the support she’s received from her family, and especially her husband.

Along with her own paintings, Rudolf in recent years has enjoyed collaborative projects. She has illustrated books by two local authors, “Keep Movin’ Your Energy” by Pat Stempfly and “Family Tree of the Rainbow” by Raymond TeKorako Ruka. She’s currently in the beginning stages of illustrating a children’s book by Patti Dallas, a project that is looking for funding.

Pam Geisel is a local graphic designer and art quilter who, in a written statement, said, “Simply put, I paint with fabric. I have always enjoyed art but it was the tactile nature of working with fabric that drew me to quilting. I like to create more texture by adding other fiber elements as surface design.”

Geisel wrote that she enjoys both traditional pieced abstract quilts and representational landscape quilts. The Winds show includes both, with representational quilts showing poppies, a red barn, sunflowers, a mermaid and a painter standing in an open field.

According to an email, with her representational works Geisel starts with a photo, then tries to distill the image down to the basic shapes and colors. With her computer she “traces” the outline of the shapes so they can be printed out and traced onto fabric. For the most pictorial quilts, she fuses the cut fabric to background fabric, then sews it on permanently during the quilting process. An average quilt takes about two to three weeks.

While she has also experimented with painting, quilting is the art form that compels her.

“I’m a tactile person and I like touching the fabric,” she wrote. “When I painted, I liked to use watercolor paints and I find that the fabrics are not only more intense than the colors I was getting when I painted, but the printed design on the fabric adds a visual texture to the pieces.”

A mainly self-taught art quilter, Geisel wrote that she took shop class in junior high in order to avoid learning how to sew, but since then, she’s taken a variety of workshops on quilting techniques.

Her quilts have won “Best in Show” at a juried landscape competition at the Rosewood Arts Centre Gallery in Dayton and an honorable mention at a national quilt show in Lancaster, Pa. She also belongs to several quilt guilds.