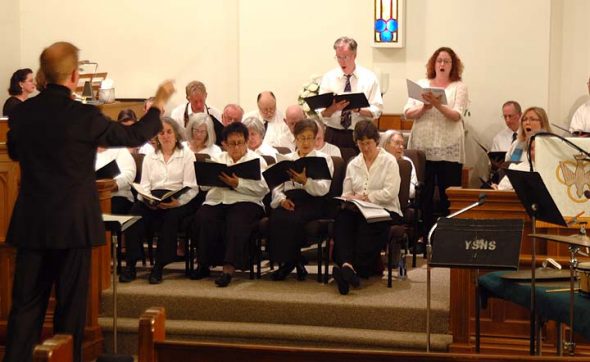 The Yellow Springs Community Chorus and Community Orchestra present “The Creation” by Haydn next Sunday, May 8, at 7:30 p.m. at the First Presbyterian Church. The group is shown here rehearsing Bernstein’s “Chichester Psalms” last year, with Jennifer Gilchrist, who is a featured soloist for “The Creation,” shown standing at right. (News archive photo by Matt Minde)

In 1798 the premiere of Franz Joseph Haydn’s “The Creation,” was eagerly awaited in Vienna. The beloved composer was at the peak of his career, and those lucky enough to attend the performance were not disappointed.

“Already three days have passed since that happy evening and it still sounds in my ears and heart and my breast is constricted by many emotions even thinking about it,” a concert goer wrote to a Vienna newspaper, according to Wikipedia.

“Haydn poured every aspect of his creative genius into ‘The Creation,’ and it continues to occupy an exalted spot in the choral repertoire,” Johnston wrote in an email. “Haydn particularly shows his expertise in the writing for the orchestra, which is filled with special effects and challenging passages. The overture, entitled ‘The Depiction of Chaos,’ was considered quite modern in its day with its dissonance and ambiguity.”

The libretto follows the Biblical story of Genesis, with the score providing a musical reflection of the creation story.

“The music is very dramatic,” said Bruce Bradtmiller, a member of the chorus. “When God says, ‘Let there be light,’ you can see the light. It’s thrilling to be a part of it.”

About 70 people will take part in the performance, with half in the chorus and half in the orchestra. Most are musicians and singers from Yellow Springs, who are grateful for the opportunity to make beautiful music at home, among friends.

“You can count on one hand the number of towns with 3,500 people that have a community orchestra and chorus and band,” Bradtmiller said. “The fact that we have these three organizations under one baton means that we can mount larger works, like ‘The Creation.’”

The robust nature of the Yellow Springs musical groups can be partly explained by the surprising number of local high-level amateur musicians, according to Mary White, the orchestra concertmaster. And it can partly be explained by Johnston, who attracts musicians from outside the village as well.

“We are so blessed to have an incredible conductor and talented players from surrounding areas who want to play under James,” she said, citing the orchestra’s first oboe player, Deb Powers, and her son, Eric, who plays first cello, who both live in Dayton.

To Community Music founder and member Susanne Oldham, Johnston is “one of the best conductors I’ve ever played with” due to his clear baton technique, technical expertise, communication skills and an ear “that hears everything.” And she especially appreciates his ability to work with the varied range of experience and skills that come with a group of amateur musicians.

“He pays each musician respect,” she said.

The benefits to local musicians of performing together are many, Johnston said, including the social experience of creating a performance together and the intellectual and musical challenges of mastering new music.

“Music-making is a workout for the entire being — the heart, soul, muscles and brain,” he wrote.

And for audiences, local orchestra, band and chorus performances provide “an intimacy and familiarity with the performers that’s not always found in large cities or venues,” he wrote. “I think audiences appreciate the hard work that the performers do, which highlights the idea that a performance is as much a social event as a musical one. It makes Yellow Springs an interesting place to be.”

And while the musicians are all volunteer, there is a need for income to pay soloists as well as Johnston — though typically, he’s not paid nearly enough, Oldham said. The spring concert is one main venue for fundraising, and Community Music organizers hope those who attend will be generous when they see the donation box.

“Everyone should come and hear this concert,” Bradtmiller said. “It will be good.”