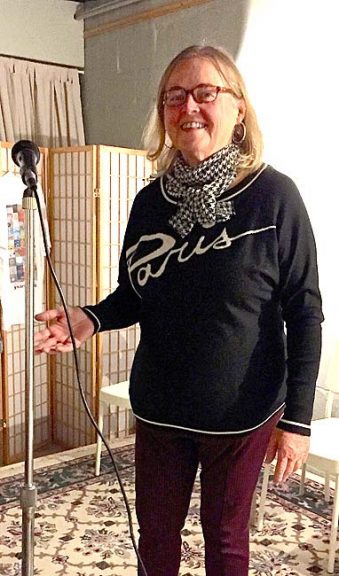 Story Slam, a live storytelling event that was a smash hit when it debuted in February, returns to the Yellow Springs Arts Council this Saturday, May 14, from 7–9 p.m. Doors open at 6:30 p.m. Here, Dayton-area writer Jude Walsh Whelley warms up for her winning story. It was the first story she had ever told to an audience. (Submitted photo)

Jude Walsh Whelley had never told a story to an audience before. But that didn’t stop her from entering, and then winning, February’s Story Slam, a storytelling event organized by the Yellow Springs Arts Council. Styled after the Moth, a popular New York City storytelling forum, Story Slam invites participants to tell a true story live within a certain time limit, no notes allowed. Audience members score the story, 1 to 5, and a winner is announced.

February’s event drew eight storytellers and about 40 audience members, according to YSAC’s Lara Bauer. A new addition to Arts Alive!, the YSAC monthly series that features local talent, Story Slam was an instant hit, Bauer said, and organizers resolved to regularly reprise it.

So on Saturday, May 14, Story Slam returns. While February’s theme was love gone right and wrong, the upcoming event asks people to tell stories about “life’s sudden twists and turns.” Storytellers will have 10 minutes to tell their story. Those interested may sign up in advance, or simply show up and throw their name in the hat.

When Whelley heard about February’s Story Slam, she knew she wanted to attend. The Dayton-based writer is a fan of the Moth, heard locally on WYSO. But she didn’t think she had a story that fit the evening’s theme. And then, just 10 days before the event, she had a chance encounter at a coffee shop. A man at another table was drawing an intricate mandala-like prayer wheel, and spontaneously offered to draw her wishes onto the wheel. Both of them, she said, left the encounter uplifted.

Whelley recalled thinking, “Okay, I can tell this story.”

Her tale of that moment of intimate connection between strangers clearly resonated with audience members, who voted the story to the evening’s top spot.

“It was a warm and friendly audience; people were really listening,” she said. “I felt I got energy back from them.” And she learned a lot about the art and craft of telling stories that evening. Storytelling is performance, she said, so elements like pacing and pauses, eye contact and “body English” (gestures and movement) are crucial to the story’s impact.

Observing other storytellers, “I felt like I was getting a master class on how to do this,” she wrote later on her personal blog.

Now she’s hooked. “I’m beginning to find my storytelling tribe,” she said. And she’s looking forward to round two of Story Slam.

Nicki Strouss was another participant in February’s event. A yoga teacher and potter who works at John Bryan Community Pottery, she had some experience with Moth-style storytelling from similar events in Columbus. But when she showed up at Story Slam, she didn’t have a “gelled” story. As she put her name in the hat, she had a moment of doubt.

“I was thinking, ‘Hmm, I didn’t quite think this through,’” she recalled. And then she was chosen to go first.

Her story about relationships and compromise featured a memorable anecdote about “a toilet with no walls” at her boyfriend’s home in the woods. “Sometimes you make outrageous compromises for a relationship,” she conceded. She relaxed into telling the story, “looking over the heads of the audience” at first, then tuning into their reactions. Audience laughter signaled that she was on the right track.

“You can prepare all you want, but what ultimately gets told happens in the moment,” she said. In ceramics, she relies on wabi-sabi, the idea that “things flow naturally and create themselves.” The same principle applies to storytelling, she said.

“Everybody tells stories,” she said. Wright is part of Yellow Springs Tale Spinners, the local storytelling troupe whose members include her husband, Harold Wright, Eric Wolf and Lisa Holmes. Three of the members told stories at February’s event, and will again at the upcoming Slam.

Wright’s own storytelling roots go back to childhood. Her mother’s family “talked in story,” she said. Even minor incidents became elaborated tales with multiple tellers and versions.

“Everyone told it their own way and sometimes they even argued about it,” she laughed.

Wright believes oral stories have a richness that written stories can’t quite match. Even in — or maybe especially in — a digital age, stories retain their power, she said. They open the teller to the audience, and vice versa.

“There’s no story without an audience. Storytelling is about that connection,” she said. That’s one reason scoring is part of the Story Slam format. “The audience really listens because they have a stake in listening,” Wright said. Audience members don’t actually “slam” a story, she clarified. Rather, they listen and score based on their gut response.

Strouss agreed that the human drive to tell and hear stories is innate. The personal triumphs, the poignant moments, the embarrassments — all is fair game. Confronted with the “toilet with no walls” in the woods, her storyteller’s impulse was to “invite everybody in,” she laughed. Only retrospectively, of course. In the form, both magical and true, of a story.

Story Slam happens on Saturday, May 14, from 7 to 9 p.m. at the Yellow Springs Arts Council classroom space on Corry Street. Doors open at 6:30 p.m. All story enthusiasts are invited, tellers and listeners alike. The suggested donation is $5–10.