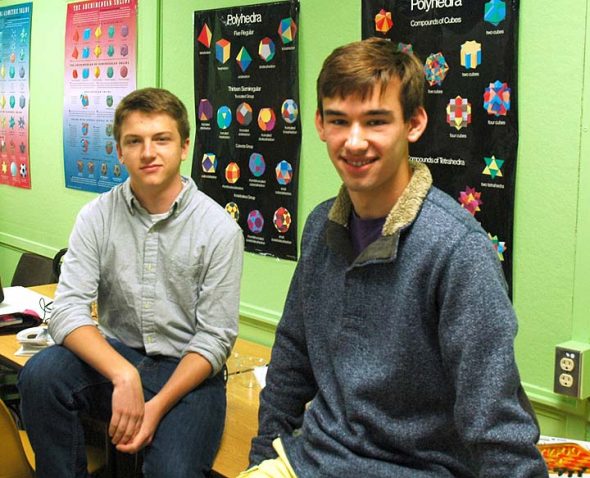 2016 YSHS salutatorian Henry Potts-Rubin, left, and valedictorian Gabriel Day sat in front of posters of their favorite subject, math. The two have a broad range of interests, spanning scholarship, sports and art, and both express an immense love of learning for the sake of learning. School counselor Dave Smith said the two are representative of a remarkable senior class, and one that is made up of “hardworking and lovely people.” (Photo by Dylan Taylor-Lehman)

Yellow Springs High School counselor Dave Smith said that this year’s senior class is a remarkable one. In addition to being all around good kids, almost a quarter of the graduating class has above a 4.0 grade-point average. Sending the seniors off to the next adventure will certainly be a loss for the school and the community, but that just means that the broader world will benefit from meeting them.

“They are hardworking and lovely people,” Smith said. “We’ve known this since the students came to the building in seventh grade.”

“They are students who have truly excelled across the curriculum,” said Smith.

Both Day and Potts-Rubin are deeply interested in a subject that many of their contemporaries balk at: math. It is a subject that not only speaks to their natural abilities but has also helped to broaden their understanding of the world.

Day has always taken advanced math classes but said the real beauty of the discipline didn’t click with him until early high school. He took two math classes his sophomore year and was immersed from that point on. He began watching math videos on YouTube — “there are some really cool math channels,” he said — and began discovering all of the things that can be done with math.

Potts-Rubin, on the other hand, said he’s always known he’s had a knack for math, and his interest was encouraged by a cartoon on PBS called Cyberchase, in which math is employed to save the world from disaster. He said he’s taken every math class possible at the high school, all the way through AP calculus, and has always pushed himself hardest in that field.

“Honestly, I’m going to be disappointed if I don’t get a 5 on my AP calculus test,” he said.

Last fall Day gave a Ted Talk in Dayton on the subject of math, hoping to correct people’s misconceptions about what math is really about. It’s not about numbers and equations but classical truth, he said. Day said he doesn’t like plugging in numbers any more than the next person; what really grabs his interest are proofs.

“What’s great about a proof is that it’s not based on observations — it’s purely true, and you know it will be true forever. That’s what I love about the subject.”

Potts-Rubin and Day are both scholars and athletes, and their involvement in sports has been the source of much inspiration.

Potts-Rubin is on the YSHS tennis team, and has been playing soccer for most of his life. Sports have taught him a lot about cooperation, he said, and are a great way to socialize. While everyone in his class is fairly close, he is closest to his teammates from the soccer and tennis teams. Indeed, some of his fondest memories from high school revolve around playing sports.

Day is also a well-known name on the tennis court, and has been involved with a fencing club in Dayton since he was young. He was able to indulge his boyhood love of sword fighting when he saw a flier for a fencing club at the Bryan Center. While he doesn’t compete in fencing tournaments much anymore, he said he does have an official rating.

“Though it’s the lowest rating you can have,” he said with a laugh.

Nevertheless, his friends don’t challenge him to sword fights much anymore. “I think they’re intimidated by my skills,” he said, laughing again.

Music is another one of Day’s loves. He has attended local music camps for a number of years and currently plays saxophone. His senior project was organizing and performing a recital at the Yellow Springs Senior Center. A few years ago he played in Sassabrass, a local music ensemble that he cites as the source of some of his fondest memories of his high school years.

While Potts-Rubin does not play in any musical groups with clever names, one of his creative outlets is writing. He did Power of the Pen in middle school and worked as an assistant at POTP competitions while in high school. His senior project was staging a creative writing competition whose entries were judged in part by YS News staff. The contest ran three rounds, in which competitors had 40 minutes to pen a work of flash fiction.

The experience was rewarding, but also taught him a bit about time management.

“Do a senior project that gets done in the first semester,” he advised.

When Potts-Rubin talked to a college admissions officer, the officer told him that the thing that most excites and most frightens students is independence. Day and Potts-Rubin agree that the prospect of being away from home is a little nerve-wracking.

Nevertheless, Day will be attending the University of Chicago this fall. He said he was drawn to the ideals of the school. Society and academia is way too focused on getting into your profession early and making money, he said, and that’s not what his approach to scholarship is. Even though the college would certainly provide such an opportunity if he sought it out, Day says he appreciates the more traditional approach to academics, in which students study across the spectrum of knowledge and train their minds to think.

Day has been to Chicago three or four times before. He deemed it a beautiful city and highlighted the art museum as an especially memorable part of his trips there. Last time he was there was in the winter, and he said he is looking forward to seeing and exploring Chicago in temperatures that aren’t near-Arctic.

Potts-Rubin is an only child — his parents are Brian Potts and Beth Rubin — and said he is only slightly worried how his parents will cope with being empty nesters. But he said they are proud of him and proud that he found a college he is excited to attend. Potts-Rubin is heading to the College of Wooster, in Wooster, Ohio. He knew he wanted a small, liberal arts college but said he found it difficult to distinguish between such schools when he toured them last year. But when he found the College of Wooster, it felt like home.

Both students are interested in studying something mathematic in college, though what field they’ll choose hasn’t yet been decided. Potts-Rubin said teaching math is something he has thought about, and he is interested in taking his math studies beyond a bachelor’s degree. Day said he’s keeping an open mind when it comes to future fields of study, as he has to get through his required classes first.

Day agreed with Smith’s assessment of the class being particularly pleasant and said that one thing he liked about his class is the broad range of interests held by his classmates.

“Everyone seems to be really good at something,” he said. “There’s a great diversity of interests — math, drama, literature, medicine — and I think that’s a really good thing.”

Sassabrass was really fun, he said, as was his experience with School Forest. The club raises and sells Christmas trees but also goes camping, rafting and adventuring.

Day credits growing up in a household — his parents are YSHS teacher John Day and Angie Day — that values ideas as the foundation of his intellectual interests. “Everyone in my family loves to think and talk about interesting issues,” he said.

Potts-Rubin agrees his class is an all-around good group of people but also wanted to credit his teachers for their influence. He was especially appreciative of his two math teachers, MacKenzie Reynolds and Dee Anne Holly, and said they not only taught him a lot about math but about the joy of learning in general. The autodidact’s appreciation for learning is something instilled during his years at the Antioch School, where he says he was encouraged to grow into himself and embrace what makes him excited about learning.

Their excitement for learning primes them for great things, said Yellow Springs School District Superintendent Mario Basora. Day and Potts-Rubin are examples of the fearless thinkers the district works hard to foster, he said.

“Both are going to go on and do terrific things with their lives,” he said. “I can’t wait to see what they do in the future — they’re really going to make a difference.”