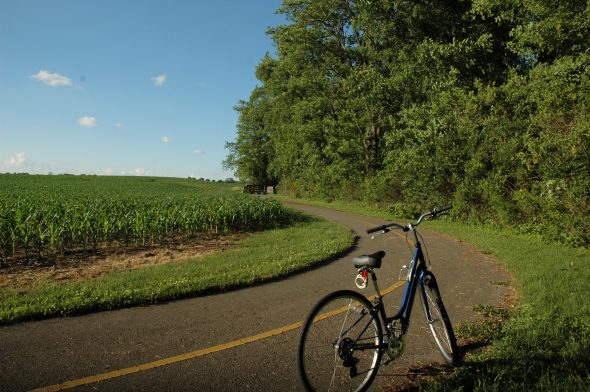 When I write a poem on the bike path, I’m a genius. Pedaling down that tunnel of green, the ideas, images and associations flow. Everything, from the blossom on the smallest weed to the sudden leap of a deer across the path, shimmers with significance. Emerson’s observation that natural facts symbolize spiritual facts never seems more true. Notwithstanding the labored pump of my legs, I’m all spirit, and the dense and rooted web of shrub and tree is all spirit, too.

But just as dreams lose their magic when you wake and try to speak them, the poems I compose on two spoked wheels never make it intact to the page. Oh, they make it to the page, sort of. It’s just that they aren’t what I thought they were, creations caught mid-flight. Instead, they squeak-squeak-squeak in conspicuous transit. They breathe hard. They jam their gears. (Past time for a spring tune-up!) And the page itself is bumpy with detritus from a recent storm.

If you’re a writer, or an artist of any kind, you have to tolerate these failures of translation. You have to tolerate the constant reminder — Emerson, Keats, Shelley and a few other giants aside — that you’re not a genius. (Particularly when you spell it “genuis,” as I have twice now, typing these words.) In the dream-space of the bike path, I may be. But in the sterner light of reality — the reality I’m living in right now, tap-tap-tapping on my laptop — I am something far less than.

The best poem I’ll ever write is the one I’ll never write. It’s the one I’ll write only in my head, under the influence of bicycling, which apparently is for me as potent as the more illicit highs other writers have pursued for inspiration. That’s the seductiveness of such highs — they tempt you to believe that every flash is a flash of brilliance, when it may just be the flash of another cyclist’s reflector, as she calls out, “Passing on your left,” and pedals right on by.

And that’s why, as much as I love my ridin’ poet self, I love — I’m trying to love — my writin’ poet self more. For if ridin’ self touches bliss, writin’ self touches ASDF with one hand, JKL; with the other. From these and like letters and symbols every poem is made. If it has a drop of the original nobility in its blood line — some green tint from my bike path ruminations — I am pleased. If it doesn’t, I’m oddly undiscouraged. (Is this part of the delusion — the sense that next time, next time, the impossible will be achieved?) Either way, I’m amused to recall that the alphabet I’ve used is the same one in which dishwasher manuals and tax forms are written. Any real poem has to contend with the extreme humbleness of its materials.

As do we, I guess. Our human materials are pretty basic: synapse, sinew, blood and bone. These come together to do some marvelous things — like ride bicycles! like write poems! — but the stuff from which we’re made is awfully ordinary. The chipmunk I scared on the bike path today was my equal on a material level. (And maybe on a spiritual level: he popped into his hole before I could ascertain his philosophical views.) I felt, as I rode, an almost overwhelming kinship with everything my wheels passed and my eyes touched. I felt, if I’m saying this properly, elevated by my association with the most lowly things — the dirt, the weeds, the “summer snow” drifting down from the cottonwoods and accumulating, just as winter snow does, in the margins of the path.

I felt a poem coming on. A glorious, light-filled poem that arranged the mote-like dance of the cottonwood’s release, already perfect, into something even more perfect because it was art. I stood in the snowy margins and looked and looked — I was already at my turnaround point, just before Route 68 — and couldn’t stop looking. Inside each nimbus was a tiny seed. No traveler (the seed) has ever been so swaddled. No traveler (me) has ever been so certain that each seedship represented something eternal, something poetically profound.

In my mind, the seeds float and don’t stop floating. Yet the poem I came home to write didn’t get written. Ridden, yes — but written? It never will. But this column, a rear-reflector flash, did.