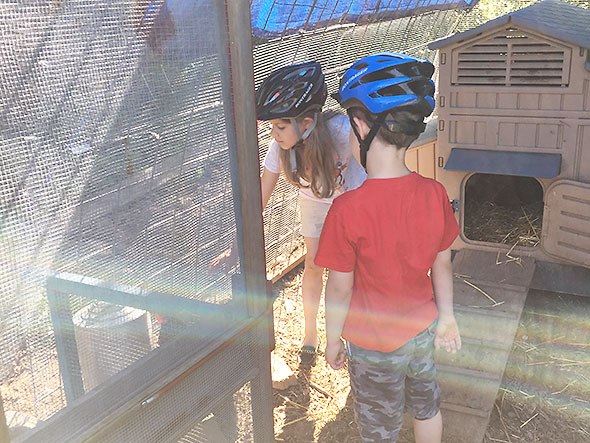 Just before dawn, the morning song of a robin heralded the moment that the light began to break. The song was as intense and insistent as the buzz of an alarm clock that a neighbor forgot to turn off. Somehow bird song is better. It seems a gentle way to wake…taking cues from the subtle assertions of others.

In this past week between when school closed and Sea Dog Swim season begins, the children found their own reasons to wake up. Soaking in the more leisurely mornings, I’ve been roused by the sounds of my daughter moving about the house readying herself. There were a couple of days that she was up and out the door—riding her bike to release her friends the chickens from their coop—all before anyone else in the house rolled out of bed.

My son’s morning motivation has been less altruistic. He pads about the house searching for unattended electronics, hoping to sneak in a few minutes of Scooby Do before breakfast. Today, his father made him a deal: vacuum the basement stairwell and dress for church then some Scooby Do. They readily came to agreement, and in mere minutes his tasks were accomplished. My son curled into his favorite viewing center…the deep depths of his father’s sleeping bag…while the rest of us got our own acts together.

We’re celebrating our son’s birthday this weekend. He’s been enthusiastic about volunteering to people that he is six! Last year at his birthday party he was shy about answering the question “How old are you?”. He was uncomfortable with the attention at first scowling at the person’s impertinence, but he soon found his own way of accepting their interest. He learned to tease people. When someone would ask him his age, he’d answer “I’m fine.” and watch them blink at his answer. If they asked how he was, then he’d say “I’m five!” His father wasn’t quite convinced that our son understood what he was doing, but we’ve exchanged enough knowing looks for me to see when my young man is being a little stinker.

The five/fine bit is not his first after all. When he was two, he’d tease me. He’d look up at the moon and pronounce “Look, it’s an egg.” I’d say “No, honey, that’s the moon.” He’d return “No, no, it’s an egg.” with the profound confidence of a philosopher. We’d then discuss the object’s characteristics its shape, its size, its color until I’d sigh and concede “I guess, it IS an egg.” My guy would break into a smile and say, “No, silly, that’s the moon!”

My son’s intense interest in video is a bit of a back slide. We cut the kids off from video abruptly after our daughter discovered Five Nights At Freddy’s this winter. My kids have found inappropriate videos on youTube before, but this horror video game drew the kids in to a dark place of high anxiety and violence. I have trouble watching as a 40 year old and the youTubes video brought the children dangerously adjacent to hyper violent material. We didn’t reduced screen time; we cut them off cold turkey telling them to find other occupation. I’m pleased to say that they did. The children became teachers in their creative play diving into their rather neglected stockpile of stuffed animals to form two classes.

For a couple of months now, they have been waking up to build charts, drill math, and taking their charges on field trips. My kids have become particularly interested in gathering teaching materials for their plush student body. We took a trip to Unfinished Creations on Saturday and let the kids browse the stacks. We came away with dry erase markers, giant erasers, easels, and big thick drawing pads. 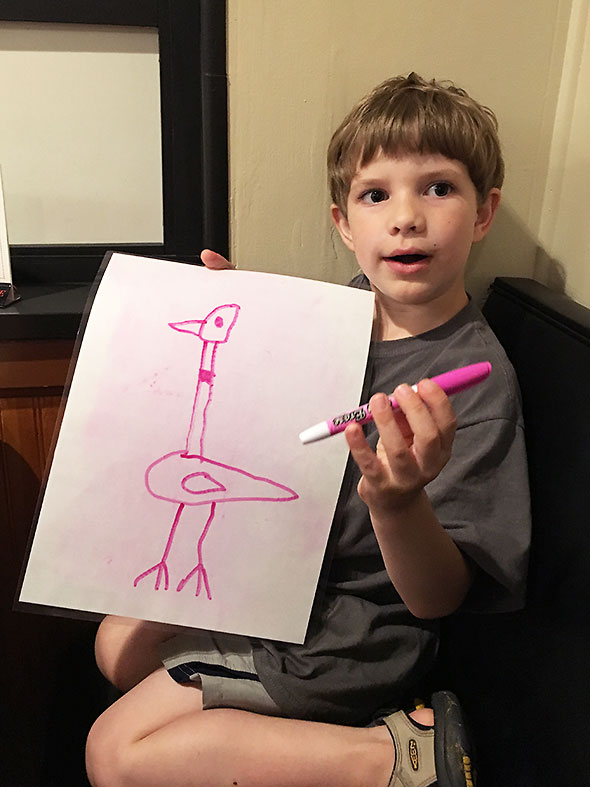 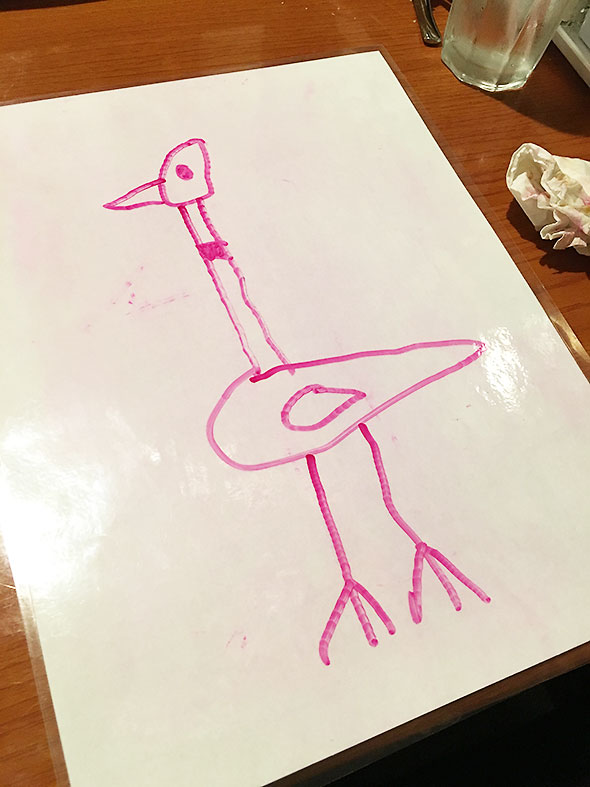 My favorite moment this weekend was the impromptu dinner we had at Song’s Sushi. The restaurant has a new set of laminated menus. The kids marked down your order checking boxes with a bright pink dry erase marker. We handed back the sushi menu but kept one listing appetizers. The appetizer menu was blank on one side, and the kids and I took turns drawing pictures. My husband and I started a debate over the natural orientation of letters. If we made them into characters, which direction would the characters naturally look? The kids loved the giraffe I made out of the silhouette of the number one. It reminded my son of a favorite Mo William’s character. He erased my rendering and drew William’s pigeon from memory. His sister was inspired and asked for her chance at the board and drew the pigeon capturing a couple of elements. 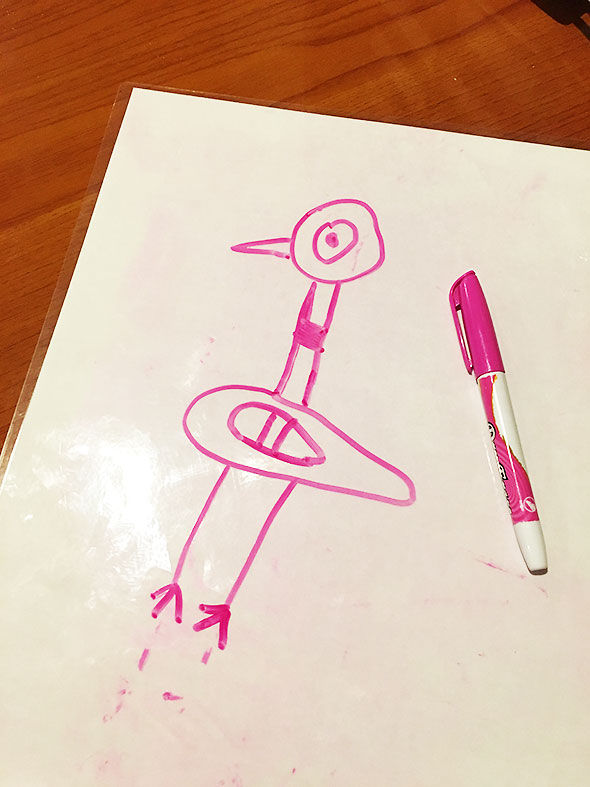 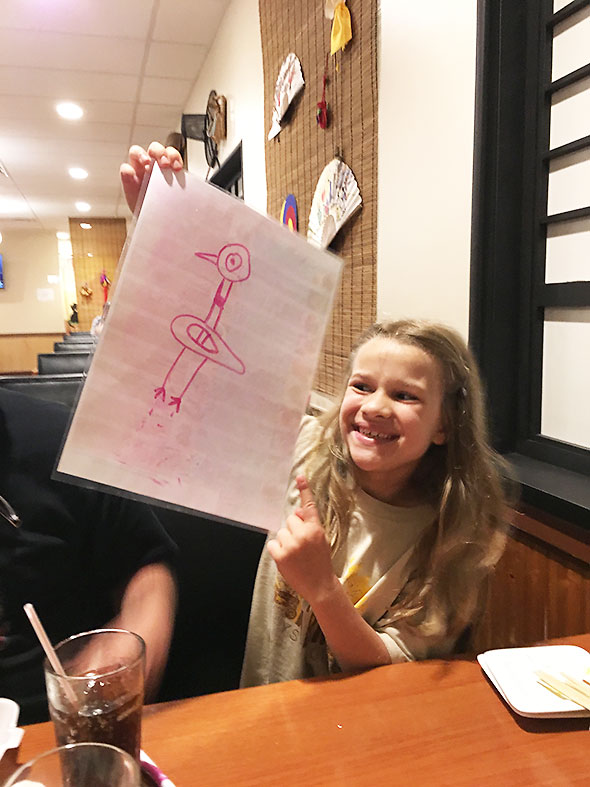 When it comes to media, there is something special about books. We can memorize songs, we can watch videos until we can recite the dialogue by heart. However, books seem to open up a special place in imagination. When I find the kids pouring over books together, I’m happy. When they interpret the books, I get excited. When I see them mentoring each other, I rest assured they are on the right track.

We had a bad moment last week. Early in our stewardship of the Antioch School chickens, we found our charges at risk and worried if we’d be able to keep them safe. With the help of Lindie Keaton, we regrouped and reset the chicken’s fortress. We placed the coop on new ground, cleaned out, and secured its perimeter. We worried more but in the end the rest of the week went uncommonly well. Our daughter roused herself and led the family to the roost. Our son clucked contentedly in the company of the birds and cleverly honed his skills in chicken herding. Each day the family took home two eggs still warm from the chickens’ wombs and placed them in the family egg box for safe keeping.

So we hit a snag but we didn’t lose heart. We just reset and regained our footing. We let the early alarming moment pass. That alarm was charmed away by the week’s more pleasant surprises. Like the one where our son chirped “Good morning, ladies!” as our daughter tripped the chicken coop door latch.

We’re learning what motivates our children and gets them out the door. It’s fun to find them asserting themselves. No prodding from parents necessary…gentle or otherwise.