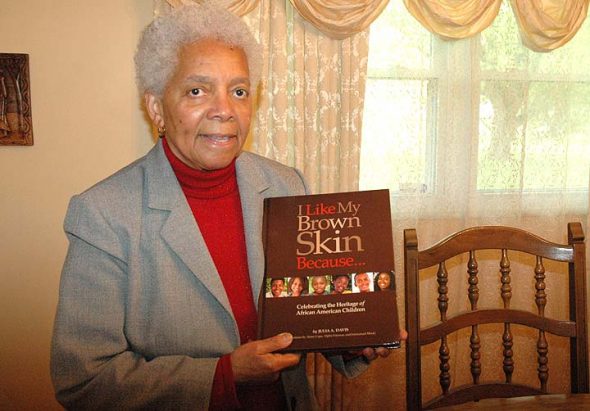 What began as a letter written to her 4-year-old grandson while he napped has become a 142-page, 12-chapter, hard-cover book earning praise from prestigious review boards and lay readers alike for its author, villager Julia Davis.

A retired history teacher at Yellow Springs High School, Davis said she was prompted to write the letter-turned-book in response to a surprising and innocently heart-breaking question posed to her by her grandson, John Christian, while returning from a shopping excursion. Strapped into his car seat, playing with a dinosaur toy that had removable rubber skin, “he asked, as if out of nowhere, ‘Gram, has your brown skin ever made you sad?’”

Remembering that day recently from her home near the high school, Davis said she was stunned. She said he went on to ask: “Why are we brown? Why do you like your brown skin so much?”

Thus inspired, Davis began a letter that in subsequent months became the recently published book “I Like My Brown Skin Because … Celebrating the Heritage of African American Children,” available for purchase online at Epps-Alford.com.

Davis said she wanted to answer John Christian’s questions honestly and with love, and at the same time give him the resources — “fortification” — for growing up and living in this world where skin tone carries unearned weight.

As she wrote, she realized that her grandson “was likely one of millions of other children sharing this sadness,” and that he articulated a serious identity issue arising from messages within our culture. “Children have been watching us since birth. …We cannot ignore these questions,” she said.

The book became a mission. “I worked on it for two years, night and day,” she said.

The principal audience is children and young people, but all ages can find both information and insight into the realities of being an American of African heritage. Davis said she imagines the book being used in schools, but she also envisions families reading and talking about it together.

Each of the 12 chapters completes the sentence “I Like My Brown Skin Because …” The title and theme of chapter one is “I Am Beautiful.” “I Am a Survivor” is chapter two. Other chapters include: “I Want to Do What is Right,” “I am a Loyal American,” “I Have Moral Strength,” “I Believe in Myself.” Original illustrations throughout are by Abner Cope, a retired associate professor of art at Central State University, and two of his former students, Alpha Fryerson and Emmanuel Mooty.

She said that her now 6-year-old grandson likes the book, but an illustration depicting the Trans-Atlantic journey of enslaved people made him cry.

“It’s very personal,” Davis said of the book. As such, every chapter ends in a special note addressed to “‘Precious Children,’ where I talk to children the same way I talk to my grandson.”

In addition, the book features a prologue with suggestions for ways to use the material, an epilogue that discusses some of the challenges in our society today and concludes with a glossary of terms.

As a historian, Davis has in many ways written a history book. “Without a solid understanding of the history of African Americans, nothing about the so-called ‘racial tension’ today makes any sense at all — especially to children,” Davis writes in publicity material for the book.

“You can’t just answer a question without giving some background,” she said in follow up. “[Contemporary culture] didn’t just happen in a vacuum. When we see African Americans getting upset, there’s a reason for that.”

While the book appears nominally to address issues of racial identity, Davis challenges the socially constructed definitions of “race.”

“I don’t like to talk about ‘racism,’ because that assumes there is a race,” she said. “There is, however, ‘colorism’ and ‘featurism.’”

“Children see,” she said. “They realize there is a difference” in attitudes and treatment related to skin color and physical features. She recalled reading a book to her three children when they were young and the children noticing that the main characters in the book had light skin while their servants had dark skin.

“It’s the elephant in the room that people don’t talk about,” she said. “We have to know and talk about these things. It’s equally important for European Americans. It’s the real world.”

Rather than promoting color-blindness, which she said is impossible, Davis advocates teaching children to be “color-appreciative.”

“What I want readers to take away,” Davis said, “is [the belief] that whether brown, black, blue, green or polka dot, that I’m okay as I am, and I’m going to make it in this world.”