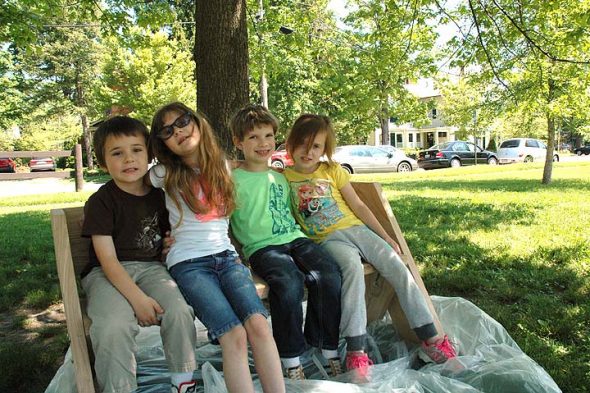 Kindergartners Zane, Maddy, Lian and Gracie seemed to prove the point of the newly installed Buddy Bench on the Mills Lawn School playground recently. The bench was constructed by students as a PBL project from wood of one of the many recently felled ash trees. (Photo by Carol Simmons)

A group of students at Mills Lawn School installed a new feature on the K–2 playground recently that they anticipate will help their classmates enjoy a happier and friendlier recess time.

A newly constructed “buddy bench” sits invitingly under the shade of a maple tree, facing the playground area on the Elm Street side of the school.

“When you don’t have a friend to play with, just go to the buddy bench and wait for a friend to come,” said Lian, a Kindergartener who, along with his classmates Gracie, Maddy and Zane, teacher Jen Clark and two second-grade mentors, Caroline and Ryan, made the bench — with help and support from a variety of people in the community.

Constructed of wood donated by Bob Moore from ash trees that had to be felled from the school’s grounds, the bench addresses a reality of elementary school life. Recess time isn’t always fun and games. “Sometimes there’s crying,” Kindergartner Maddy said.

Teacher Clark said she learned about the “buddy bench” concept about three years ago, and has wanted to bring the idea to life at Mills Lawn ever since. Schools across the country have been installing designated benches as a tool to combat bullying and foster inclusion, compassion and kindness. The local district’s project-based learning focus provided an academic structure in which to engage students in the entire process and help them feel committed to the project’s success.

The Mills Lawn Kindergartners and second-grade mentors said they definitely saw the need for the bench on their playground. But they didn’t work from their own experiences alone; they also conducted a survey of the first-grade classes about their feelings and experiences. They charted the results, which then helped them think of multiple ways the bench can be used to help solve playground problems.

“If you’re sad,” Maddy said. “Or angry.” The bench offers a safe place to express emotions and find support from peers.

Second-grade mentor Caroline said she knows what it feels like to be lonely at recess. “In first grade, my family moved here, and I didn’t have any friends.” Finding someone to play with at recess was hard, she said, until she eventually made new friends. The buddy bench is meant to help ease that difficulty. “If you don’t have a friend to play with, or your friends are playing something you don’t want to play,” go to the buddy bench.

Like Clark, Caroline had also heard about the buddy bench idea being implemented at other schools and she had independently sought to introduce the concept at Mills Lawn. She said she first went to school counselor John Gudgel, and then she went to Principal Matt Housh, who told her she should talk to Clark. Clark said she had wanted to bring in some older students to help the Kindergartners, so was thrilled when Caroline approached her. Caroline suggested her classmate Ryan as another helper, “because he’s crazy about building things,” Caroline said.

Clark said Caroline and Ryan were also helpful in walking with the four Kindergartners to the high school earlier this spring, where they spent an afternoon building the bench under the guidance of middle school math teacher Jack Hatert and several eighth-grade volunteers.

The students wore safety goggles and ear protectors as they worked with power saws and electric drills and screwdrivers. The work was loud, they said, and exciting. Clark said she was grateful for the new “maker space” work area, funded by the Community Foundation.

The more tedious process of sanding the bench took place back in Clark’s classroom. Sanding down all the scratchy edges and splinters was time consuming, but the students said they liked the work. Clark said students from other classes would drop in during free time to help.

Needing two days in a row of good weather, the bench didn’t get placed outside until this past Monday, when the students applied the first coat of sealant. The second coat was to go on on Tuesday, and the completed bench was to be ready for use Wednesday.

The school was ready. Clark and the students also made a video to introduce the buddy bench to the school community and to act out scenarios in which it could be used. The video was shown during the school’s exhibition night as well as on the morning Bulldog News that is broadcast in every classroom.

Principal Housh said he is very happy with the project. “It’s really important for kids to develop socially and feel like they can connect with friends. The buddy bench gives them a specific strategy and resource to use. … It’s a really simple idea, but also a brilliant one.”

Second-grader Caroline deems the project “a huge success.” Her only lament is that as a rising third-grader, she’ll be moving to the older students’ playground on the other side of the school. But she has plans to work on getting a buddy bench there as well. “We’re hoping that everyone will now have a friend to play with,” she said.