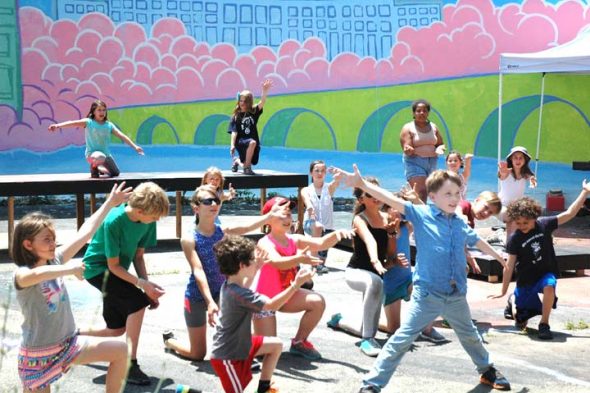 On a hot summer day last week, the Antioch Amphitheater was filled with kids singing and dancing in the midday sun. They came rushing out from the entrances underneath the stands to take their places on the skeleton of a stage. If someone missed their cue, the actors went back to their starting places and began the musical number anew. The temperature was in the upper 80s, the dance number was a complicated affair, and the day’s rehearsal was just getting started.

“You might want to watch from the shade under the bleachers,” advised actor Lucy Dennis, 9.

But dedication is the name of the game for the actors in the Yellow Springs Kids Playhouse. Each YSKP production is a homegrown, novel affair. The idea, the script, the music and the choreography are all original.

“The ineffable effect of creating all original work includes ownership and the excitement of doing something … that none have done before,” according to YSKP’s website.

The idea of doing something nobody has done before is reflected in this year’s play. The production explores the concept of power, said director AnnMarie Saunders, and how it is gained when there isn’t an obvious path.

This year’s production is called “Alice, Although,” and it tells the story of Alice Roosevelt Longworth, the contumacious daughter of President Teddy Roosevelt. The show premiers on Thursday, June 23, and marks YSKP’s 22nd year staging shows.

Alice Roosevelt Longworth was one of the first people to be famous simply for being famous, Saunders said. Her notoriety stemmed partly from her scandalous behavior, like smoking in public or riding in a convertible without an escort. Teddy Roosevelt once said that he could run the country or attend to Alice, but not both.

But later, Saunders said, Alice became a mover and shaker in the political world. She was known for being able to bend the ears of influential guests at dinner parties and sway policy. Her acerbic wit was influential as well. Saunders said. Roosevelt Longworth once remarked that presidential candidate Thomas Dewey looked like a little man from the top of a wedding cake, a damaging characterization that stuck with him for the rest of his campaign.

“If you can’t say anything nice, come sit by me,” Alice Roosevelt Longworth once said.

Naturally, such a spirited individual is a fun character to play. A few lucky actors get the chance to do so. Kiera Hendrickson, 11, explained that one of the play’s novelties is the fact that four actors play Alice. The four Alices represent distinct stages of her life, Hendrickson said. Alice Roosevelt Longworth lived to be 96.

“The play shows Alice as a strong and confident woman,” said Maggie Knopp, 12. “Though times have changed, the same obstacles are still there.”

Alice Roosevelt Longworth was known for holding political views opposite her family, Saunders said, and had a contentious relationship with Eleanor Roosevelt, opposing New Deal policies. The writers had to figure out how to convincingly convey their butting of heads. A brainstorming session resulted in a unique solution — a rap battle between the two Roosevelt women.

At last week’s rehearsals, the chorus of a show tune gave way to gritty beat. The actors delivered their lines, trying to look tough as they dissed the other’s political policies.

Actor Sofia Lawson, 12, said it was difficult to learn how to rap convincingly, but that’s been part of the fun. While the play is a lot more work than she expected, she said she has taken to the pace of the work and now finds herself reciting lines and singing songs from the production everywhere she goes.

Hendrickson, on the other hand, doesn’t sing at home, as she doesn’t want to spoil the play for any of her family members.

Saunders said that YSKP is almost like a summer theater camp, though it is much more intensive than the average summer camp environment. Rehearsals begin at the end of the school year and become a 20-hour per week commitment during the summer.

In fact, students dedicate more than just four hours per day to the role. A lot of the kids are interested in the subject matter of each play and have fun doing research on the time period, Saunders said. Actors have researched costumes and hairstyles, she said. Miles Gilchrist, 9, who plays Teddy Roosevelt, reported one day that he had read a biography of the President.

Staging the production is an in-depth exercise for the adults involved as well. Barbara Leeds, a Yellow Springs resident, is the musical director. A professional musician who has worked on a variety of music-based productions, “musicals are a whole different beast,” she said. Leeds is in charge of staging the music numbers, coordinating the transitions from song to spoken line. She also directs the five-piece band that will provide the backing music.

“We have to work out traffic patterns for 37 kids on stage,” she said.

Because the kids are treated as proper actors, they are much more serious about their participation in the play, said Ara Beal, YSKP’s managing artistic director. The large number of names written and crossed out in the waistbands of the costumes speaks for the interest there is in YSKP year after year, she said.

Beal said she is incredibly appreciative that the community shows an interest in the work the students and the production team are putting into “Alice, Although.” YSKP is an integral part of a Yellow Springs summer, she said. The magnitude of the performance and the aplomb with which it is performed shows just how personal it is for the people involved.

“[The presidential musical] “Hamilton” took six years to create — we do all of that in a much shorter time period,” Beal said with a laugh.

“Alice, Although” was written by Jill Summerville, with music by James Johnston. The production runs from June 23–June 26 and June 30–July 3 at the Antioch Amphitheater. Tickets are $10 for adults and $5 for students and seniors. More information can be found at YSKP.org .