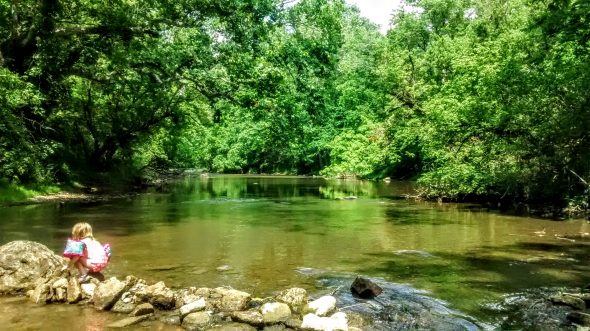 The Little Miami River at Jacoby Road. The unknown awaits.

I had wanted to write a blog about the magic of the Little Miami River. I started composing it in my head one afternoon recently as my husband, daughter and I waded around at the boat launch on Jacoby Road. Lucy wore her floaties and crouched near a rivulet, pulling dead leaves out of the crags in a pile of rocks. Anthony skipped rocks, and I looked around for snails and crawfish and water pennies, little trilobite-esque barometers of good water quality.

As we moved around the river, I told Anthony an anecdote, one with which I planned begin my blog: when I was a kid, I was terrified of rivers. I was just about my daughter’s age when the miniseries “Lonesome Dove,” based on the novel by Larry McMurtry, debuted on network television. I watched some of it with my parents when it aired, and there’s this horrific scene in which a young man who’s afraid of water crosses a river on horseback. Somehow he manages to fall off his horse at the worst possible moment, straight into a nest (a swarm? a patch?) of venomous water moccasins. In my memory, at least, it’s a scene of pure horror, in which his death amongst a writhing mass of fangy doom seems to take forever, to a swell of bitter music and screaming. I can’t verify how accurate that actually is to what happened in the broadcast, since I haven’t seen it since then, but I was nevertheless convinced that all rivers were snake-laden death zones. Never mind, of course, that the bodies of water in which I was totally fine with swimming as a Floridian youth were home to the occasional alligator and shark.

So I was not super interested in the Little Miami when Anthony suggested we take a family dip for the first time last year; the water moccasins notwithstanding (there are none in Ohio, by the way), I’m more of a beach girl. One of my first dates with Anthony was an impromptu swim in a lake in Kentucky, where I was living at the time. It was his suggestion, and wanting to maintain an appearance of carefree youth and disguise my neurotic distrust of any body of water I hadn’t properly Googled, I agreed. I went in fully clothed and the back of my neck prickled any time I brushed against something unseen, constantly on the edge. At one point I touched a log and screamed in Anthony’s face for what must have seemed like no reason at all. And yet we’re married now, so I don’t know what to tell you.

Anyway, as I said, I was composing this in my head while we all played around in the river, so it’s clear that I eventually got over my fear, for the most part. It helps that the Little Miami is shallow enough around here that you can usually see the bottom. As I thought about my blog, I took pictures of our idyllic visit, a testament to a perfect family afternoon and, implicitly, a perfect family.

In my mind, the piece began to take shape, drawing connections about how you have to take chances in life, maybe, or how family changes your view of things, or that my daughter, growing up a river girl, may develop an irrational fear of sea creatures. It was on track to be very fulfilling and precious, I assure you.

Then we decided to take our canoe out on the Little Miami.

Our first mistake was that all three of us came; we’ve been canoeing on lakes several times this summer with Lucy in tow, and she’s mildly tolerated these several-hour-long excursions. This made us think, in our summer-fun-fueled ignorance, that it was a good idea to take her on a longish river trip. A trip, by the way, on a section of the river that has been consistently very shallow this summer; we figured we’d have to pull the canoe in some sections, and we were fine with that.

What we didn’t expect was that we’d have to get out and pull the canoe every five to ten minutes or so. We honestly could have walked the Little Miami faster than we ended up canoeing it.  When we had been on the river more than an hour and still hadn’t hit our first landmark, panic started rising in the back of my throat. We’d parked the car at what was to be the end of our journey, and I was already thinking we’d never make it there. I started blaming Anthony for all kinds of things, because this was his idea, you see. It made sense at the time.

Annoyed lunchtime on the Little Miami.

Around the fiftieth time we had climbed out of the canoe to pull it along the shallows, a couple of dogs came running out of the woods, barking at us with what I interpreted as murderous intent. My anxiety and exhaustion combined in this moment, kicking my maternal instinct into overdrive, and I remember that I swung my paddle up over my shoulder like a baseball bat, ready to defend myself, my family and, if God wished it, my sovereign nation against these mongrels.

It turned out that they were just a couple of curious pups who lived up the hill from the river bank; someone whistled and called for them a few minutes later, and they ran back home. I immediately felt stupid.

Not as stupid as I did a few minutes later, however, when the river got deeper and Anthony and I climbed back into the canoe — and it capsized.

In the moment I didn’t know what to grab first: phone, paddle, towel, child? Ladies and gentlemen, I hate to admit it, but I did, in fact, grab the phone first, but in my defense, the phone wasn’t wearing a life jacket. I did grab Lucy second, though, and she was fine, actually, as this was the most exciting thing that had happened to her all day. She stood in the shallows near the bank and played as Anthony scooped water out of the canoe with his cupped hands and I tried desperately to collect the oars and the towels and our lunchbox and the canoe-securing accoutrements that we would need to attach the canoe to the car if we ever escaped this river hell in which we were currently living.

We managed to get all the water out of the boat (or enough of it, anyway) and get back in with all of our stuff waterlogged, but intact — with the exception of one blue pool noodle, which we use to cushion the side of the canoe against the roof of the car. As we got back in and paddled away from this particular misfortune, I saw a glimpse of blue ahead: the pool noodle was lapping gently against the bank ahead of us and to our right. Was it possible that we would manage to save everything?

In our excitement, we paddled too fast. We forgot to slow down until it was almost too late, and hit the bank by the pool noodle with a jarring thud. This was no big deal, however. The big deal was that, in an effort to slow us down, Anthony had grabbed an overhanging tree branch. The end of the branch extended right over my head, and as Anthony grabbed it, he shook little drops of water from the leaves down onto me.

He also shook spiders. Many, many spiders.

In his novel “La Nausée,” Jean-Paul Sartre writes this: “[F]or the most banal even to become an adventure, you must (and this is enough) begin to recount it. This is what fools people: a man is always a teller of tales, he sees everything that happens to him through them; and he tries to live his own life as if he were telling a story.”

In the moment when I first saw, and then felt, the spiders on me, did I think about what this moment really meant? It’s possible, I guess, but all I can remember doing is closing my eyes and saying, in a surprisingly quiet voice, that this trip was over, and somebody better get these things off me, and then crying.

It’s only now that I’m writing it down and crafting a narrative that I begin to try and extract meaning out of what was a disappointing and exhausting afternoon. To interpret Sartre in a way that suits my own needs, I’ll say that it’s only after the fact than an adventure becomes an adventure; when you’re in the thick of it, it’s just life, and you’re either trying to enjoy it or move past it. After it’s over, the story of the spiders becomes both a humorous anecdote and, if I so choose, my own personal water moccasins scene. What it was at the time makes no difference, because the moment has come and gone.

Did I begin composing the end of this blog at the end of that fateful canoe trip? Of course. Three miles and three-and-a-half hours down the Little Miami, we pulled the canoe out of the water and up under an overpass on 68, our car parked another six miles down the river. Thank God I had saved the phone first when we capsized: we called my good friend Erica, who, like a real life angel with an iPhone, agreed to pick us up. As we waited, I began to write in my head: “Spiders,” I thought. “Many, many spiders.”

And I thought of the end of that Sartre quote — or maybe I didn’t, you’ll never know for sure, because all of this only exists as long as I write it down.

Anyway, it ends like this:  “You have to choose: live or tell.”