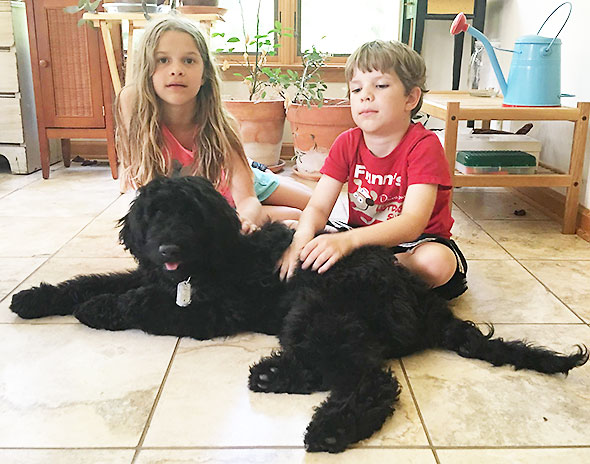 When I moved to town in 1994 and lived on Xenia Avenue, I made a habit of walking into town on Saturday mornings. About the time I’d pass the library, I felt like checking my pockets as if I had forgotten something at home. A dog. That’s what I had forgotten…so many of my fellow Saturday morning downtown walkers had not.

Now I did have pets. Two Siamese cats…one named Mingus, the other named Seoul…but I missed having a four legged companion on my downtown saunterS.

Since marrying Jeremy, I have threatened to get a dog on several occasions. After he came back from a three month deployment, I swore if he took one more deployment that I would get a dog in his absence. The house that we were renting seemed to always be settling and its restless creaking and moaning were all the more amplified when no one else was in the house but me. He didn’t take another deployment and anyway he told me we don’t need a dog—we’ll have children instead.

I didn’t exactly agree with this argument but in it I saw a kernel of hope. I may not need a dog once our children arrived…but the kids just might.

Sure enough, this past year my son has made his wishes clear. He’s been telling his parents for several months now that we should go to the pet store and bring home a puppy. He’s been to a pet store a few times. He discovered the one at the Fairfield Mall near the train ride station and would spend his time before and after the train ride checking out the kenneled pups for sale. He’d pick out a frisky pair of pups and sit and watch them with a eye of yearning and yield in displeased frustration when his parents foiled his ambitions to take one or more home. By spring he had amended his wish for a dog to two dogs. A proper plan just like John Lithgow and one dog for each child in the family.

Late winter my husband began to thaw. He confided in me his growing confidence that raising a dog would be a great experience for the children. Our daughter had grown out of her early timidity and our son though still very young was both confident and kind around dogs. Jeremy swore me to secrecy and circled June on the family calendar as our target of opportunity. He reasoned we’d wait until the kids got out of school. Then we would have the months of summer vacation to settle in with the new family member and accompanying responsibility.

We worked with regional rescues to find a good match. We figured a medium sized mature dog with enough poodle in it to be kind on the sinuses. We filled out a couple of applications announcing our intent to foster or adopt a dog. A friend recommended the guardianship program at 4 Paws for Ability, the Xenia based organization that trains service dogs for people across the country. At first, I held off exploring adoption of a rescue dog first. After reading a glowing report on 4 Paws on the Washington Post webpage, however, I downloaded an application and sent the filled-in forms to Xenia.

Adopting a dog involves good timing especially if one is attempting to adopt a hypoallergenic breed. Starting our search in late May, we missed a few chances getting out of the gate too slow. So imagine, when a 4 Paws coordinator asked if I was interested in meeting two goldendoodle puppies ready for short term fostering, I jumped at the chance. I made the appointment for the next morning and then contacted Jeremy reasonably expecting that I might have to ask for forgiveness for my unilateral scheduling decision. But he also jumped at the chance and readily committed the entire family to making the Friday morning visit.

Thursday night, we reviewed our search. He questioned whether it was wise to take on a short term fostering responsibility. Wouldn’t it be hard on the children to see the dog go when it was old enough to enter into service dog training? I agreed but told Jeremy that I thought of this visit to 4 Paws as more of a let-us-get-acquainted-with-the-organization trip than let’s-take-one-of-these-puppies-home. Taking one home to train and socialize was a big step but meeting a puppy…Puppies!!…that sounded like pure joy. 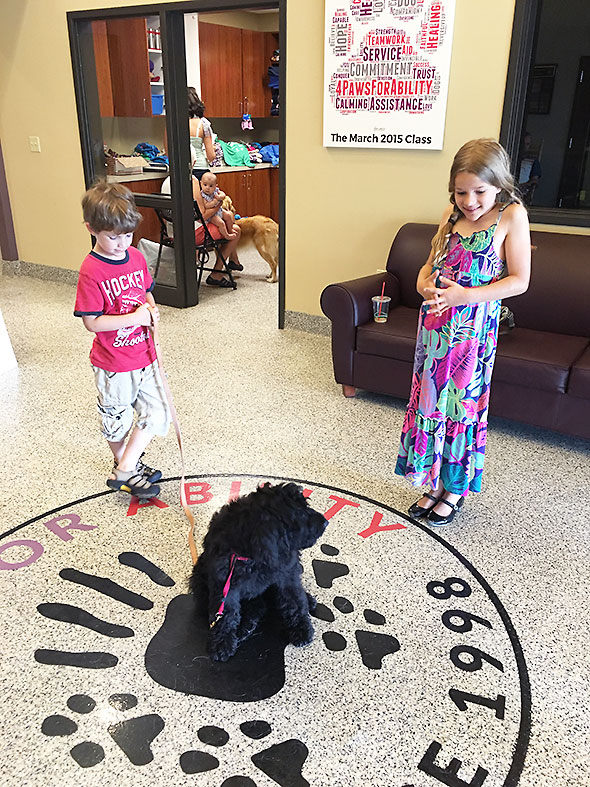 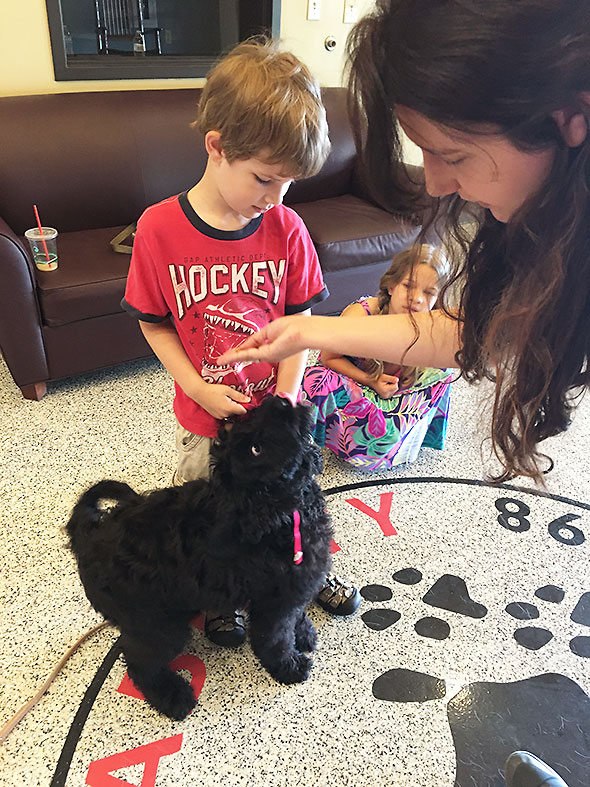 Friday, We met Director of Socialization Erin Bittner in the lobby of 4 Paws and met two dogs from the Harry Potter litter. One was a girl who took after her mother, a standard poodle. The second was a boy who took after his golden retriever father. We met the girl first, and it happened. I was smitten. I mean she’s just soooo fluffy. Her deep black color means she’s difficult to photograph but in person she’s incredibly charming. And what’s more calm. Bittner told me that the program trains both bred dogs and rescue. They have a higher rate of success with the bred dogs…a rate that she attributes to the socialization that the dogs are exposed to from day one. 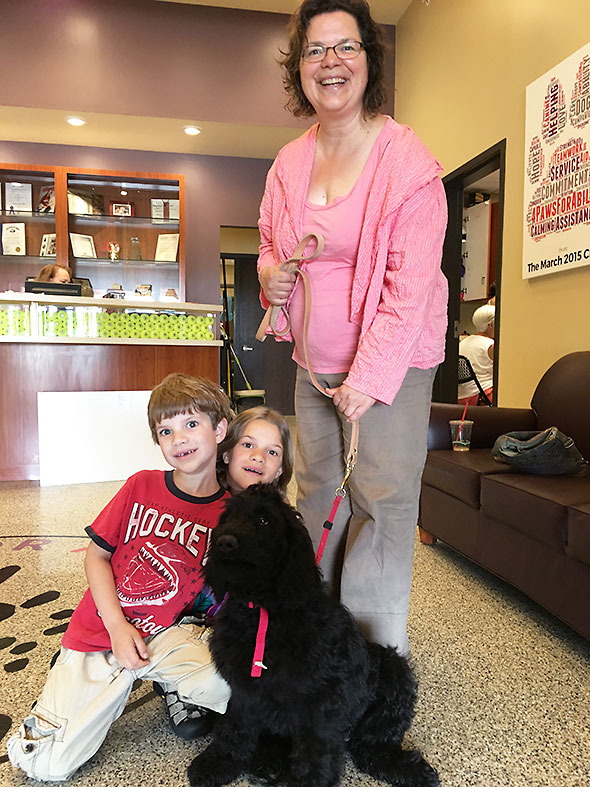 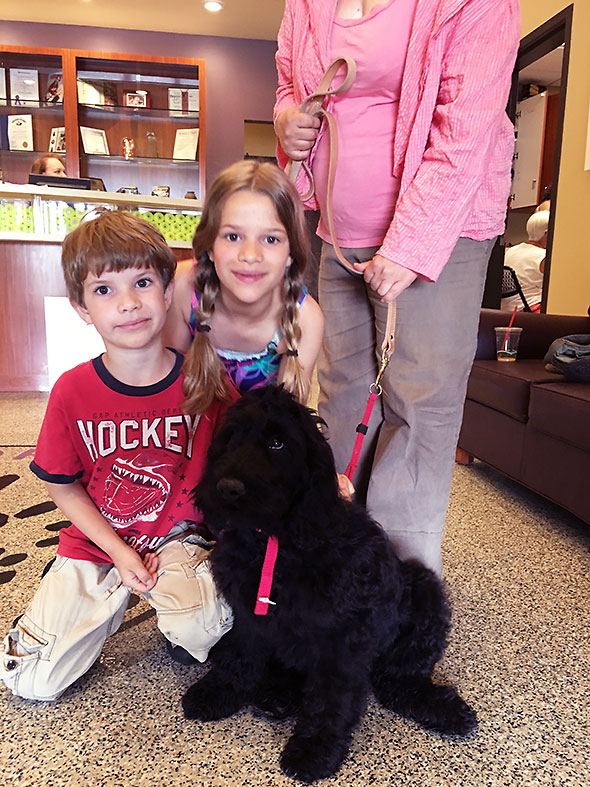 So we committed. Monday the family returned to pick up our girl, the bewitching Bellatrix, to offer her our home for the next five to six months. Friends have asked how we feel about fostering a golden doodle puppy. My thinkings take me to the end of Blade Runner, the director’s cut. We never know how long we have with each other. Saying goodbye is hard. Still, we have this time now…and we are grateful for it.