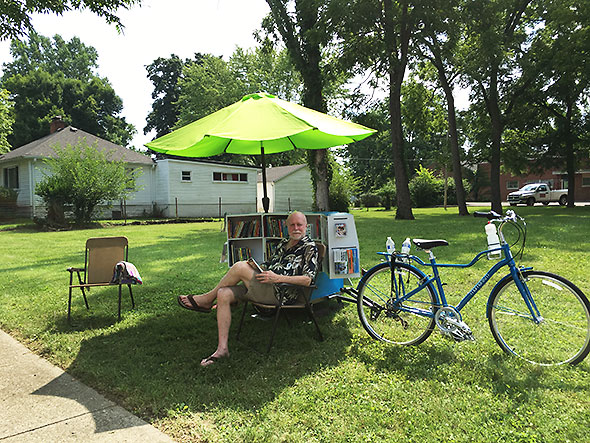 My family took in the joint open house held by local radio station WYSO and the Antioch College Wellness Center. We got yummy ice pops from local vendor Sweet P’s and sat down in the shade to wait our turn to ride the Miami Valley Township firetruck. 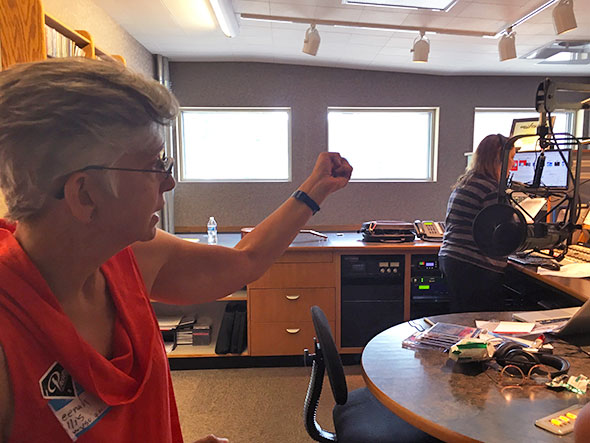 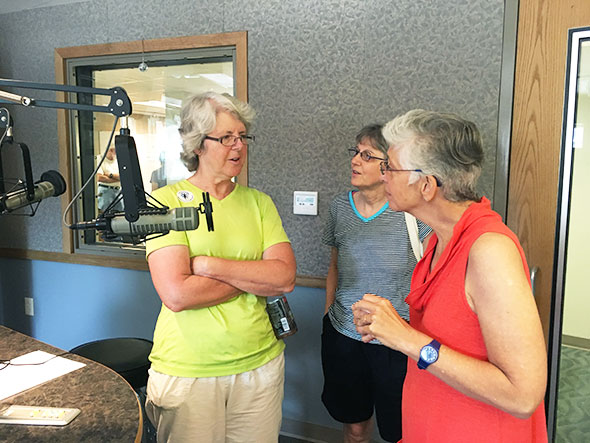 Our shade was provided by the big green umbrella of the bike bookmobile. I had seen the Greene County Public Library’s book bike in action before when I rode along side of Connie Collett in the 4th of July parade. Collett—the head library at the Yellow Springs branch—pedaled the mobile’s electric blue bike down Xenia Avenue on Independence Day while I handed out stickers and lollipops with the GCPL logo. Behind her, she towed a trailer outfitted with shelves and free books. Made mostly of wood, the trailer is heavy enough that Collett wove back and forth along the parade route to keep the bookmobile’s momentum under control. 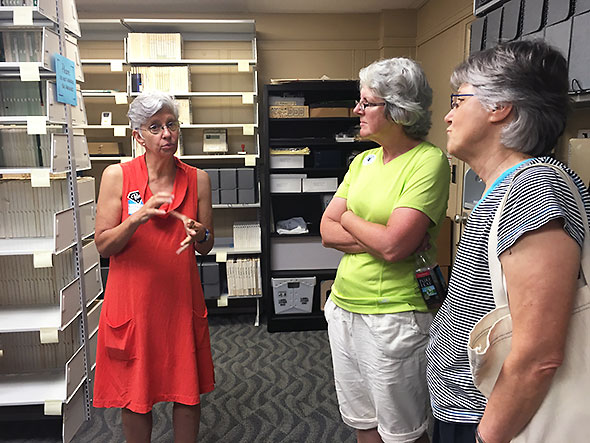 The pedal powered bookmobile made an appearance in the Independence Day parade, but here at the open house it was set up for business. And in a prime spot too. The township’s firetruck was a flashy kid magnet that could be spotted blocks away. The sizable popup library we found at the foot of the firetruck cue added to the fun. 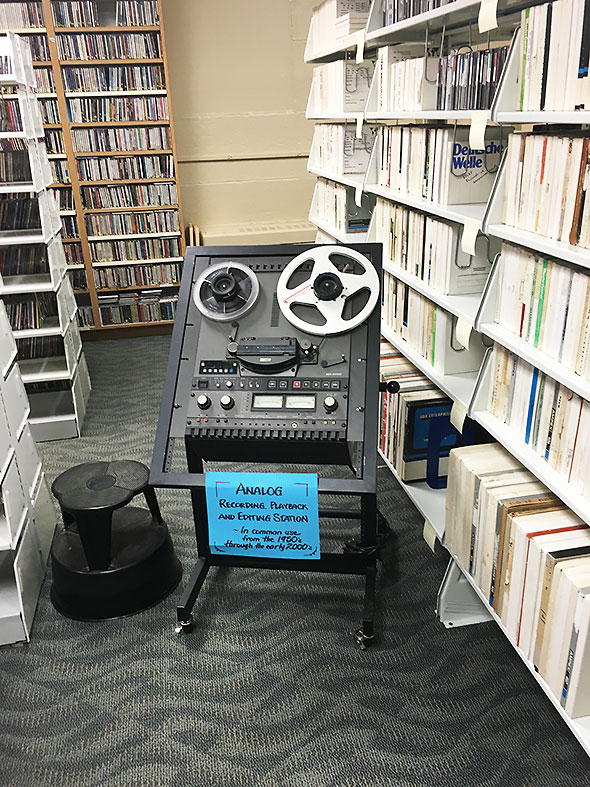 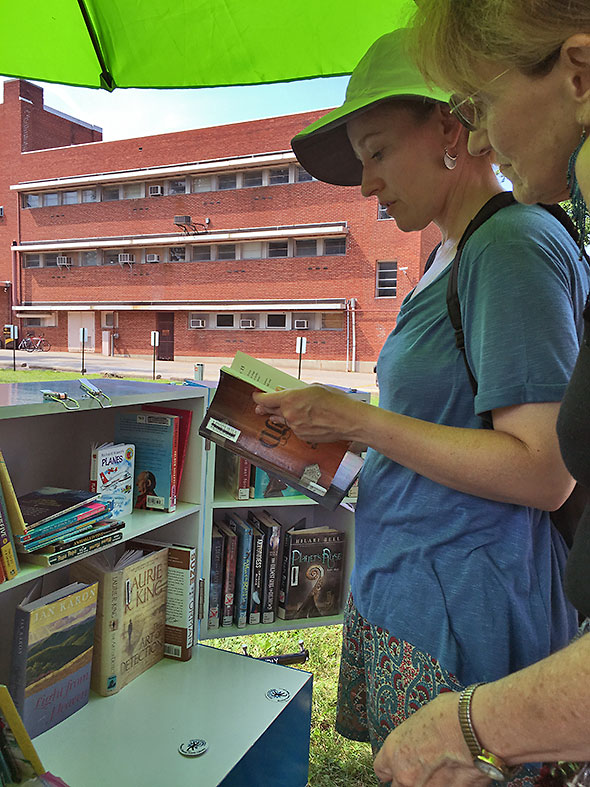 The kids took their ride on the firetruck and headed back home. I stuck around the bookmobile’s stacks a little longer until the firetruck took its last run. Collett stopped by to ask how the afternoon had gone and announced her intention to take a tour of WYSO. I jumped on that train and we arrived in time to match up with non other than General Manager Neelah Ellis. She walked us through the studios where Niki Dakota was hosting a live performance on air and Steve McQueen was recording testimonies from open house visitors. 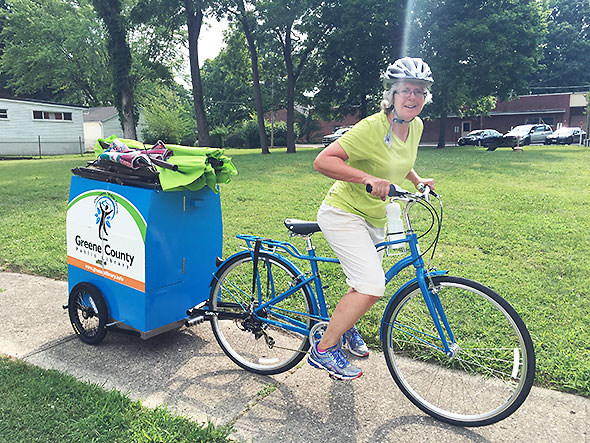 She took us back to the WYSO archives where the station’s original programs are being converted from tape to digital media. The station has been working to preserve its tape archives and was one of twenty stations to receive grant funds for the work in 2009. WYSO stood out in its project proposal in that they had a rich trove of recordings documenting civil rights efforts during the 1960s. The station also worked with the Greene County Public Library to make the archive accessible to the public.

Collett and Ellis discussed the archive and the project’s achievements in depth, and the conversation started my mind racing. I was struck by the timeliness of the project. Until that moment, I had not yet appreciated how good an resource WYSO was, how ready an access it offers to the voices of formidable civil rights activists. Walking back down the hall, I sought out Steve McQueen. He told me of his current project on Kent State which draws from the archives. I wondered aloud what material the archive has on John Lewis and the Student Nonviolent Coordinating Committee. McQueen didn’t know exactly but joined my enthusiasm in discovering the answer: How might the civil rights voices of yesteryear rise again and enrich today’s American conversation on justice and freedom.

I joined Collett outside again just as she was ready to set off for the library. The green umbrella was folded and lashed to the trailer, the book shelves closed up from view. I now knew something of the treasures inside. I was ready to look inside and really listen.