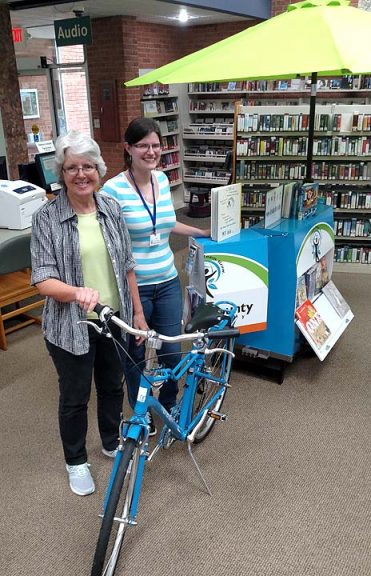 Yellow Springs head librarian Connie Collett (left) and librarian Krista Lackey stand next to the Greene County Library System’s mobile bike library, which made its debut in the Yellow Springs 4th of July parade. The bike will appear at different events and places in Yellow Springs and Greene County over the summer, delivering books and helping people learn about the library. (Photo by Dylan Taylor-Lehman)

Famed sci-fi author and prognosticator HG Wells once wrote that “cycle tracks will abound in Utopia,” while Sir Arthur Conan Doyle, author of the Sherlock Holmes stories said that “when hope hardly seems worth having, just mount a bicycle and go out for a spin down the road.”

The Greene County Library System is taking the words of these authors to heart with its new pedal-powered bike library: a bicycle pulling bookshelves will soon be seen all around Greene County.

The mobile library consists of a brand new blue bike pulling a trailer bedecked in library insignia, which features two fold out shelves filled with books. A large neon umbrella shades the literature and draws readers to the cart. The library system recently unveiled its mobile library in Yellow Springs in the 4th of July parade.

According to Yellow Springs head librarian Connie Collett, the book bike is a way to get the library out into the community. While Yellow Springs is “buried in books,” other communities are unfortunately “book deserts,” she said, without ready access to a library or book store. The bike can help reach people who don’t often use the library or know much about its services. Eventually, Collett hopes to equip the bike with a laptop and make it a wifi hotspot, so the rider can issue library cards, check books in and out and show people the different functions of the library system.

The bike library project is thanks to the initiative of Cedarville branch head librarian Susan Jeffries, who saw a similar example at a library convention. The Greene County bike is based on a similar model operated by the Boston Public Library. After some inquiries, Jeffries located the same manufacturer and hired it to make a bike for readers in southwestern Ohio. The bike is also a nod to the many great trails in the area, Jeffries said.

The bike is shared among library branches, with the branches reserving it for different events. Jeffries said her initial idea was to have “storytime in the park”-style events for kids, but she realized that there are so many festivals and fairs in the area that the bike could offer its mobile library services to a wide variety of would-be patrons. The cart was filled with free books during the 4th of July parade, which were duly received by eager readers.

While the bike’s summer tour around Yellow Springs and Greene County is still being developed, the mobile library will be stocked for each event, said Collett. Different Yellow Springs and county librarians will have their chance to try out the bike throughout the summer.

While anyone who has moved boxes of books knows that their heft can be a serious matter, she noted that pulling the trailer was easier than observers might think. The bike is geared nice and low, she said.

The primary challenge of riding in the parade was riding at the same speed as people walk, but Collett realized that riding in a generous arc allowed her to maintain momentum while staying alongside her library cohorts. (Jeffries classified the library as no heavier than “pulling a trailer with two toddlers.”)

There was a bit of a learning curve in learning how to attach the trailer and properly open and close the shelves, Collett said, but she was able to practice in the parking lot before riding in the parade, where readers cheered its presence.

“It’s nice to be in a community with so much support and appreciation for the library,” she said.

The excitement surrounding a mobile library transcends generations. Collett recalled the bookmobiles in Greene County when she was a kid. She said the bookmobile would go past her house on its way to the nearby stop. Her friends would be eagerly waiting for it to go by, upon which they would zoom after it on their bikes and raid its shelves.

“There was a four-book limit,” she said. “I’d have to ration reading the books I got so I didn’t run out.”

While the bike is soon going to be making its rounds among other communities in Greene County, Yellow Springs will have it for a little while longer, Collett said, as the people who transport it are currently on vacation. Given the beautiful weather as of late, Collett mused that maybe she’d ride the bike over to the Gaunt Park pool and give swimmers something to read during their breaks from swimming.