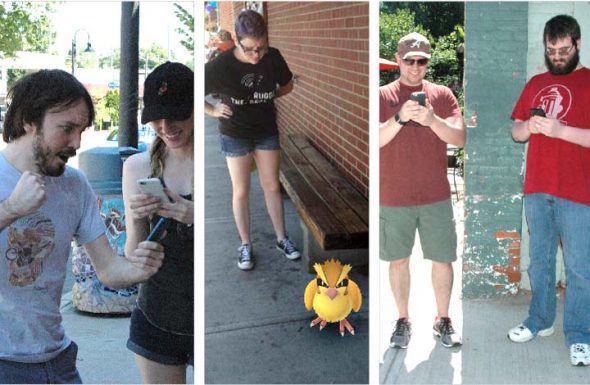 Luke Roburn and Leah Cultice of Beavercreek were hot on the trail of a Pokémon; a screenshot from Antioch student Claire “Connie” Brunson’s phone, outside of Tom’s, with “Pidgie”; brothers Chris and Cody Sackett, from Troy, outside the Emporium. (Photos by Dylan Taylor-lehman, except center, submitted)

New on the streets of Yellow Springs, Pokémon Go

While the sight of people walking and staring down at their phones may be a sign of our smart phone-obsessed times, walking around and staring at a phone in service of catching cute little monsters is a relatively new phenomenon.

Yellow Springs, like most other locations on the planet, is currently overrun with Pokémon — a portmanteau of “pocket” and “monster” — and the people out to catch them. Pokémon Go, a smart phone game, was released on July 6 and has taken the world by storm.

But, as many users attest, this game is not like others.

Pokémon Go actually gets people out into the real world and interacting with people, said Antioch College student Jonathon Winegarden, 19, who was playing Pokémon Go with two friends on Xenia Avenue last week. The game’s playing field is one’s real-life surroundings, he said.

The franchise’s catch phrase is “Gotta catch ‘em all!” and for all intents and purposes, this simple maxim makes up the backbone of the game. The game uses GPS geolocation technology to direct players around a town like Yellow Springs in search of monsters to capture, and to “gyms” where their monsters fight the monsters captured by others. Real-life landmarks are special sites in the game: the mural at the Corner Cone and the United Methodist Church, for example, serve as gyms, and the mural at the Highland Center laundromat and the sculpture in Kings Yard are Pokéstops, where players can collect special items and power-ups.

Yellow Springs resident Tristan Campbell said that transposing the game onto real-life surroundings brings out the feeling of an actual Pokémon adventure. And being able to enter the game is definitely part of its appeal.

“It’s the closest thing you can get to actually being in the game,” said Julian Stainback, 19.

Many players are drawn to the game for the nostalgia it evokes. Pokémon started as a game for the original Gameboy in the mid 1990s and spawned TV shows, video games, movies (at least 18) and a complex card game. For Winegarden, like many people, these games and characters were a crucial part of his childhood, and playing this game is like being able to revisit that time.

But players are united not just by their love of characters like Aradactyl, Varpor, and Jigglypuff, but their allegiance to their in-game team. Players are aligned with one of three teams: Valor (red), Mystic (blue) and Instinct (yellow). The points players earn contribute to the overall strength of the team, which is made up of everyone playing under that color.

Hence the eagerness to rush around town in search of Pokémon and the accoutrements that help catch them.

While one may be skeptical that playing a video games results in exercise, the game rewards walking with new Pokémon. Players collect eggs from Poke Stops and incubate them in the incubator their character happens to be carrying around, explained Dustin Mapel, who was catching a few Pokémon while picking up food in town on Saturday evening. Incubation times are measured in distances walked, he said, ranging from one to 10 kilometers.

Springfield mom Kenya Andorfer was one such skeptic, but she quickly came to realize that one can in fact exercise while playing. She and her husband and three of their five kids came to Yellow Springs on Friday and Saturday to catch Pokémon, walking miles in and around town in the process.

“It’s great,” Andorfer said. “I get to walk around the Gorge and they get to catch Pokémon all day.”

Indicating her son, Liam, who was engaged in catching a Rattata when she spoke to the News, Andorfer said he doesn’t even know he’s walking. Normally he’d be telling her how tired he is, she said.

Different kinds of Pokémon are associated with different elements like water and rock, which means they can be found in areas boasting those elements in the real world — for example, rock Pokémon can be found in outcroppings in the Glen. Players see different terrain while playing the game because these are the only places you’ll find certain monsters, explained Campbell.

The game also takes players to area businesses, but not necessarily into them. Super Fly Comics has a white board in the window declaring what team the store is loyal to. (Team Mystic, the blue team, at the time of writing.) However, Whittaker said that the game hasn’t necessarily drawn more people to the store like Marvel movies do. People who are drawn to the game may just like it on its own terms, Whittaker said, while not necessarily seeking out Pokémon merchandise.

“The game hasn’t driven up Pokémon sales because people are too busy playing it,” he said.

Current Cuisine baked cookies decorated like Poké balls, but this was more for fun than a reflection of crowds stampeding to catch Pokémon in the store, said employee Katy Gaines. Tom’s Market cashier Jacklyn Alexa said that groups of people obviously playing the game have been frequenting the store, but as far as she knows, Tom’s is not a repository for special items or monsters.

The popularity in Yellow Springs is reflective of the game’s enormous popularity worldwide. According to Fortune magazine, the game is on more phones than dating app Tinder and receives as much daily usage as Twitter. And news reports from across the nation tell of some of the stranger things that have resulted from playing Pokémon Go:

Four teens in Missouri were caught luring players to a secluded location and robbing them; two men fell off of a cliff while playing in California and a 19-year-old found a dead body while searching for a water-based Pokémon under a bridge in Wyoming. Sites where somberness is customary, such as the United States Holocaust Memorial Museum and Arlington National Cemetery, have had to ask people to please stop catching monsters there.

Nevertheless, the game’s potent mix of nostalgia, strategy, teamwork and old-fashioned walking around in pursuit of monsters is a winning combination for Pokémon fans new and old alike. Andorfer even said the game has also given her and her 16-year-old something to bond over, which any parent of a teenager knows can be difficult. And the players out and about will likely become even more noticeable when a future version of the game will allow them to do battle with each other on the spot.

“The game is addictive,” said Campbell. “You can physically go out and catch them all.”