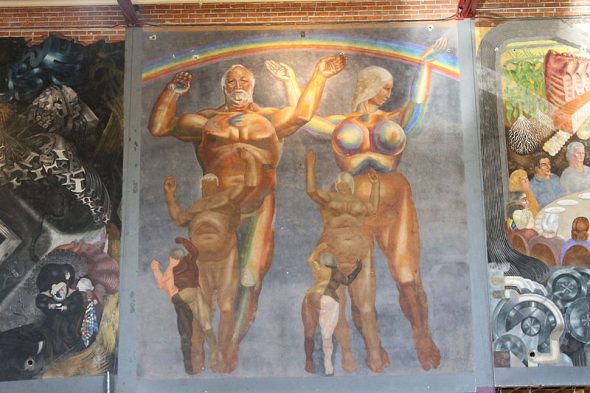 The YS Historical Society will sponsor a talk by Antioch College archivist Scott Sanders on Sunday, July 31, 2 p.m., in the Senior Center great room. The talk will concern the history of the mural in the East Gym of the Antioch College Wellness Center, which was painted by social realist painter and muralist Gilbert Wilson.

The late Wilson, a native of Terre Haute, Ind., painted many murals around the country during his lifetime, including in Chicago’s Lincoln Park building, the New York City School of Sculpture, the School of Dance in Columbus and community theaters around Terre Haute. He often sought to depict, through these large-scale works, notions such as greed, capitalism, war, industrialization and environmental issues. The mural in East Gym, painted in 1938, is divided into three sections, entitled “Collapse,” “Man Emerges” and “Order,” which depicts such further themes as racial and gender equality and fascism.

During his program, Sanders will discuss some of Wilson’s history, how he became involved in the project through the efforts of the Antioch College class of 1938 and how the mural was interpreted and perceived.

The program is free and open to the public. Light refreshments will be served.