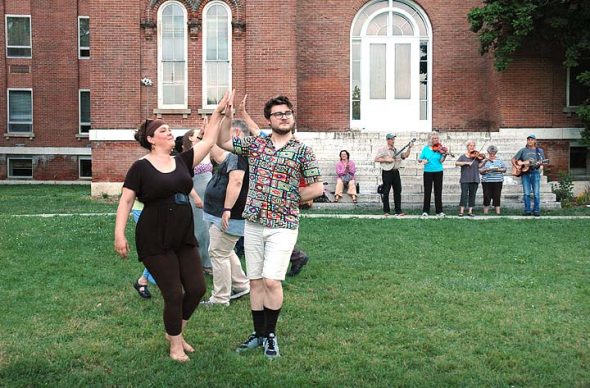 Miriam Eckenrode Saari and Garrett Young danced to a sprightly fiddle tune (courtesy of the Corndrinkers, in background) during a rehearsal of Shakespeare’s “Much Ado About Nothing” last week. Performances are free, and will be held outside Antioch Hall (Main Building) on Fridays and Saturdays, July 15–16 and 22–23. Curtain is at 8 p.m. (Photo by Audrey Hackett)

The Bard, back under the stars at Antioch College

Yellow Springs and Antioch College were once known around the world for a precedent-setting outdoor Shakespeare festival. This month, that tradition is being revived — in a small way, but with the hope of bigger things to come.

Over the course of five magical summers, from 1952 to 1956, Antioch Area Theatre, a troupe of professional actors, villagers and students, presented Shakespeare Under the Stars, a repertory performance of all the Bard’s plays. Never before in North America had the full sweep of Shakespeare been performed, festival-style, in a mere five years. Produced by Antioch theater professors Arthur Lithgow and Meredith Dallas and actor Ellis Rabb, Shakespeare Under the Stars pulled in audiences from across the country — and even drew a commendation from Queen Elizabeth of England.

By the final season, the festival was calling itself “world-famed,” and it was, said local director, producer and actor Lorrie Sparrow-Knapp, who has been digging into the history of Shakespeare Under the Stars in the Antioch archives.

Her interest is more than academic. Sparrow-Knapp aims to bring the Bard back to the village, she said in a recent interview.

“People love the Bard here,” she said. And so, as artistic director of Yellow Springs Theater Company, or YSTC, now entering its third year, Sparrow-Knapp made a bold decision.

“I thought, let’s seize the day and do a Shakespeare [play],” she said. And further, to offer performances free to all, a decision the board and actors solidly supported, she said.

But which play? To Sparrow-Knapp, that was obvious. She chose “Much Ado About Nothing,” a comedy from the middle of Shakespeare’s career that dramatizes the sometimes rocky road to love.

“My favorite Shakespeare comedy of all,” she said. “It’s a show about love after strife.”

In the original play, set in Messina, Italy, a nobleman welcomes a group of soldiers home from a war. One returning soldier falls in love with the nobleman’s daughter, who reciprocates his affection, but a cruel plot is hatched by a member of the party to divide them. Another soldier fails to recognize his love for the nobleman’s niece — the two excel in barbed repartee — but a matchmaking ploy and other events eventually reveal the couple’s true feelings. The obstacles only serve to sharpen the audience’s taste for love and longing for happy resolution, Sparrow-Knapp said.

“When we retreat into peace, we will choose love,” she said of the play’s theme. “How pithy for today.”

Indeed, she considered bringing the play into the contemporary era, with the war in Afghanistan as the backdrop. Directors have set “Much Ado” in the wake of many different wars, she said. But she ultimately chose to set the play during the Civil War. “The stakes were so high then,” she said. “The era weights the play.” The action unfolds in fictional Messina, Ohio, in 1864. The soldiers are home on leave, but will soon return to war.

Another reason for the shift to the Civil War relates to the production’s physical setting. “Much Ado” will be performed outdoors, on the front lawn of Antioch Hall (Main Building), facing Corry Street. The play makes use of that iconic red-brick structure, which dates back to the decade before the Civil War.

“It’s gi-normous,” Sparrow-Knapp said with a laugh. “Only Shakespeare could stand up to it.”

She and the actors are well aware of the building’s historic presence in another way. Antioch Hall was where Lithgow and collaborators staged their sparkling Shakespeare Under the Stars performances over 60 years ago. A stage was built out from the massive steps, with audiences sitting on the wide expanse of lawn. YSTC won’t be building its own stage — yet — but the company will be using both steps and door as part of the play.

“It’s good to have Shakespeare in Yellow Springs back where it started,” Sparrow-Knapp said at a rehearsal last week, gesturing to the building and lawn.

With just a week until opening night, the cast last Thursday was hard at work. The evening started with a “speed through” — the actors stood in a circle and delivered their lines at top speed — and continued with a rehearsal of entrances and exits to coordinate with the assembled musicians, members of bluegrass band the Corndrinkers and other local musicians who will be performing at intervals throughout the play.

The production has stretched YSTC, both dramatically and in numbers, according to Sparrow-Knapp. About half of the cast are company members, and half are new. Some are seasoned actors, others are making their debut. While Yellow Springs residents predominate, several actors hail from Dayton. The cast spans decades in age, ranging from high schoolers to senior citizens, which “adds dimension,” Sparrow-Knapp believes. There’s one grandmother–granddaughter pairing: Center Stage veteran Dinah Anderson, playing the maid Ursula, and her granddaughter, Eilis Price, who just graduated from Yellow Springs High School, serving as the production’s stage manager.

“This is community theater in the best sense of the word ‘community,’” Sparrow-Knapp observed.

The company’s production budget typically runs between $1,000 to $2,000, an amount the company in this case must cover through fundraising. “Even $10 makes a difference to us,” Sparrow-Knapp said.

YSTC is renting its outdoor performance space from Antioch College, which has worked with the company to allow for use of Antioch Hall for actors entering and exiting certain scenes. The cast began rehearsals indoors at Antioch University Midwest, which offered space for free.

The shift to the outdoors has been a major adjustment, according to stage manager Price. “Spatial challenges. Cues. Sound and lights. It rains,” she said, reeling off a few of the challenges actors — and audiences — might face. “For all the drawbacks, it’s a fantastic production,” she added.

To Sparrow-Knapp, the experience of theater in the open air is unparalleled.

“Sitting under the stars and watching a play — it’s fricking magical. If you have bug spray!” she laughed.

And though this month’s YSTC production is a modest bow to Lithgow’s legendary festival, Sparrow-Knapp believes a full-blown revival of Shakespeare Under the Stars in Yellow Springs may someday be possible.

“Much Ado About Nothing” runs Fridays and Saturdays, July 15–16 and 22–23. Admission is free; donations are welcome. Curtain is at 8 p.m., rain or shine. All performances will be held on the front lawn of Antioch Hall, facing Corry Street. Call 708-1255 or visit ystheater.org for details.

2 Responses to “The Bard, back under the stars at Antioch College”