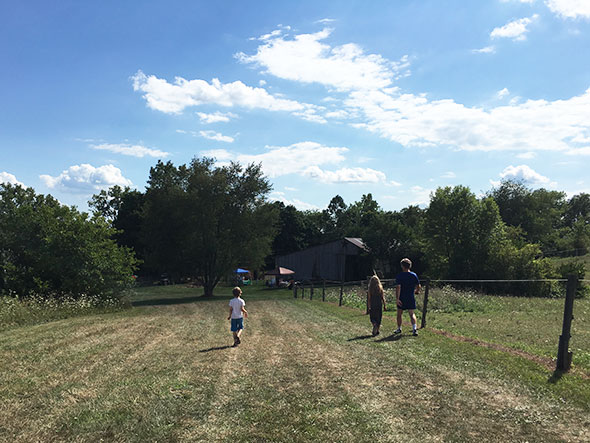 My father Tom has a great love of maps. Sometimes after church in the summer months, my father would point the family car off in a random direction and test the many backroads that crisscross the foothills of the Susquehanna Valley. When we got home, he’d take out the county map and retrace the route we took. He did this enough that he memorized the names of the backroads—paved and graveled, seasonal or secondary—even the ones that were marked on the map but not on their actual route. He earned a certain pride of place and in giving directions he’d often linger on a turn saying something like “Now you won’t see a sign but, once you turn at the red barn, you’ll be on Blevin Road.”

Last Sunday, we took a drive out into the country to visit Schutte Farms. In a rare moment of misdirection, I started us off in the complete opposite direction from our destination. When I realized my mistake, we had made the Greene County border and looped around on Route 35 toward Xenia then Route 42 toward Cederville to recover. When we reached Cederville we almost turned home since we lost so much time. 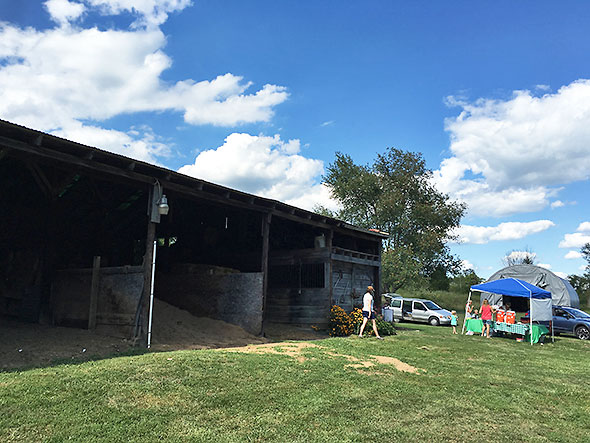 Still it was a beautiful day and a lovely drive. To be honest, I rather liked getting lost though I kept that fact to myself. My husband sensed this and drove through Cederville onto South Charleston. Though he disliked burning gas on a drive that might not get us to our destination in time to enjoy it, he humored me. Worst case, I reasoned we could help pack up the event.

As we approach the turn onto Stewart Road from South Urbana Libson, we could see the farm on rising ground to our right and a collection of cars parked out front sizable enough to give us hope. We made our destination and made our apologies at the main house for our late arrival. To my relief, we were welcomed and pointed down the hill to the barn and the animals. 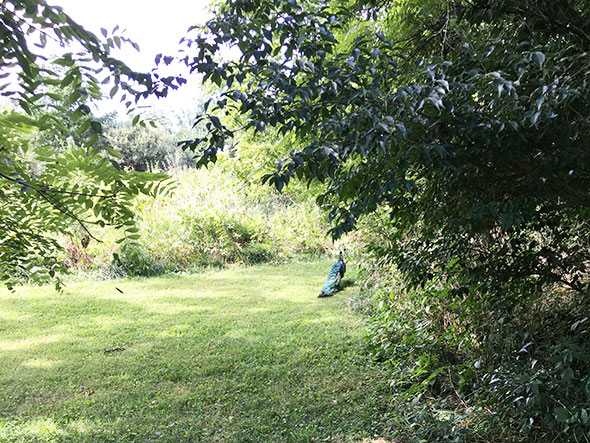 We crossed paths with Executive Director Krista Magaw half way to the barn. We could see the steel barrel like equipment shed to our left and the Tecumseh Land Trust tents set up on the lawn before the barn. Magaw hailed us as we descended and told us that there were cookies and a scavenger hunt ahead and to head on down.

As we came to the bottom of the hill and into the meadow, we could see a fenced yard with donkeys and goats to our left and the barn to our left. As we rounded the barn to get a better look at the livestock, we discovered that the barn was three sided and inside it was a stable housing, I believe, three horses. 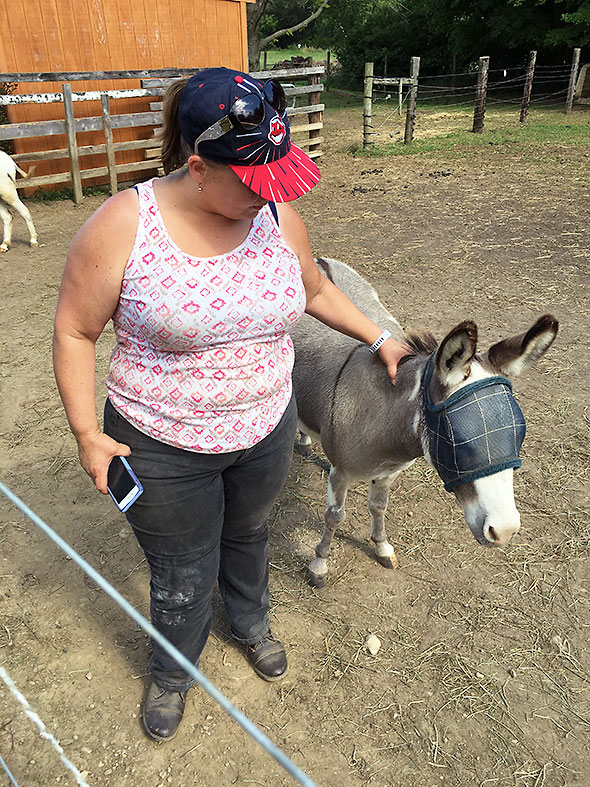 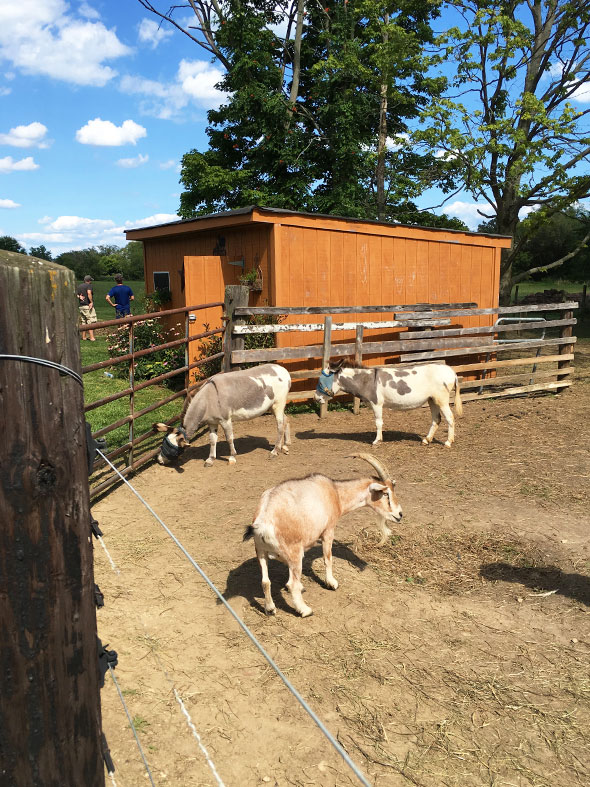 The children helped themselves to cups of lemonade and were handed a sheet detailing the scavenger hunt. “Travel around the farm”, it read. “Look for the items in the boxes.” The items were pictured and labeled. The kids took to the barn first walking past the straw lined stables and found the horse halter, lead rope, and grooming supplies. When they exited the barns open side on the far end, they saw movement to their right. Peacocks! And other birds too. My daughter came to catch me by the hand and drew me over to a small copse of trees where the birds were picking out of the sun. We saw a white goose, yellow-orangish chickens, a peahen, and two peacocks. One peacocks tail was twice as long as its body and, after one attempt by the children to chase it down, we stood still quietly for it to come by on its own and check us out. While we waited, we watched the chickens pick about the sheltered yard and listened while a farm attendant told us about how the chickens’ job about the farm was to eat bugs. My son laughed at the notion scrunching up his nose but grinning ear to ear in a interesting mix of disgust and glee. 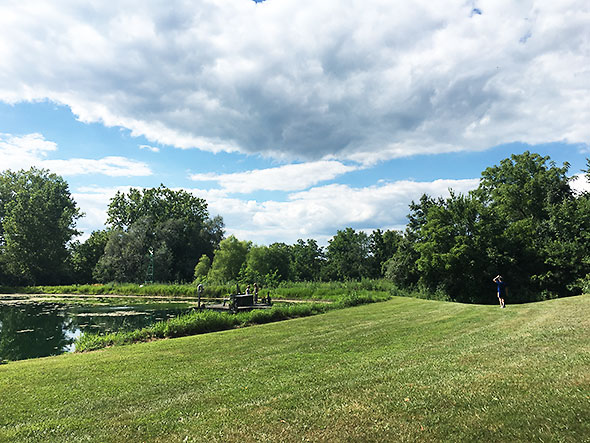 In the center of their scavenger hunt items was a picture of two guinea hen. At first, we thought the short tailed peacock to be the peahen and a drabber bird about the same size was the guinea. We corrected ourselves when two smaller birds with a similar crest broke out of the bushes to wonder across the lawn. These plump birds—smaller than the peafowl but twice the size of the chickens—were the guinea hen. Our patience was amply reward by the parade of birds our patient watch produced and then indeed the peacock with its long trailing tail ambled past its tail and carriage magnificent. 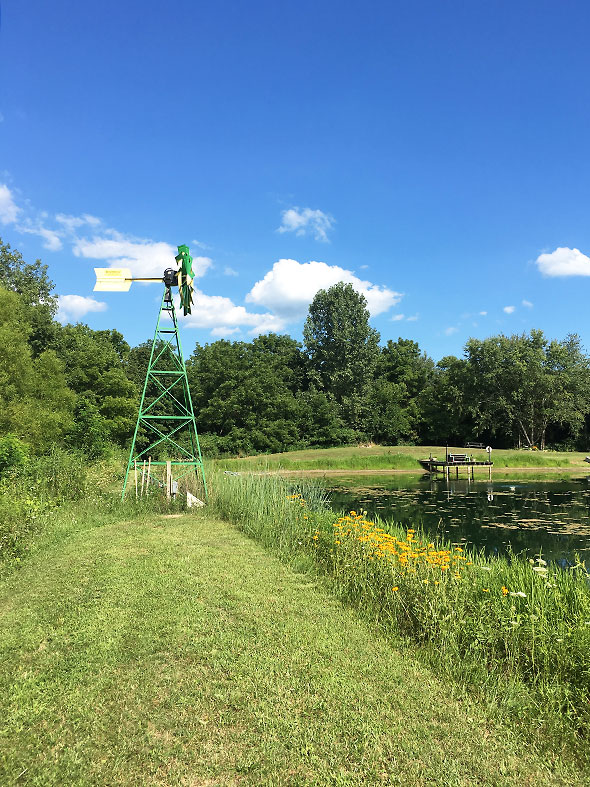 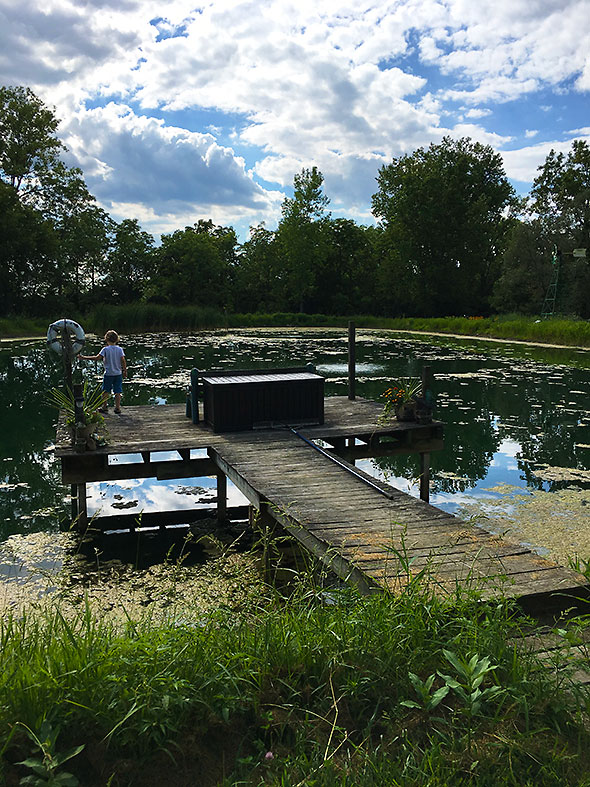 We missed a few items on the scavenger hunt list…The barn swallow nest and the bat houses eluded our upward gaze and there was so much to attend to at eye level anyways. The potbelly pig was retired into its shed having received a healthy amount of attention and afternoon sun. Another farmhand within the fence pointed out the pig’s mud hole and its other companions scattered around the yard. There were two small donkeys, a pony, and a couple of goats that shared the same enclosure potbelly pig. The donkeys had mesh visors over their eyes to keep flies off giving them a sunglass hipster kind of look. The farmhand asked the children why the farm would keep donkeys on the property. “What use could they be?” The kids guessed that the animals were used to pull carts, but, no, they were told the farmer has tractors for that plus the donkeys were a bit too stubborn to be a great help that way. Turns out that the donkeys make good watchdogs. They don’t like coyotes, and coyotes don’t like the aggressive donkey’s back kick. Coyotes learn to leave the livestock alone. 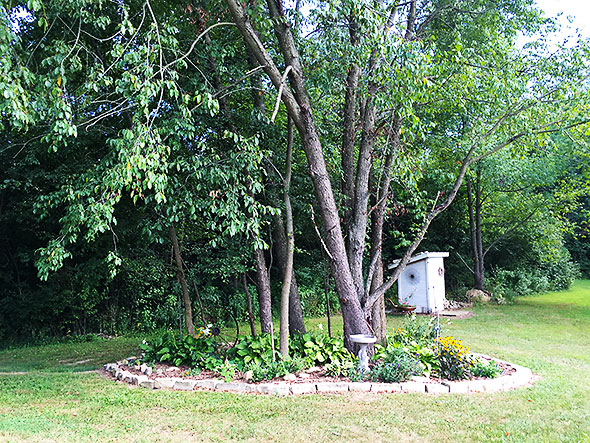 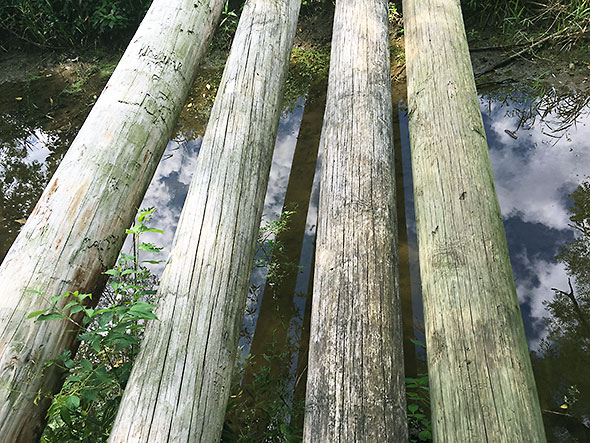 After petting the goats and meeting the donkeys, we took off across the wildflower-filled meadow in the general direction of a pond we were told about. As we made our way across the meadow, the wildflowers batted against our ankles at first but then our knees as we neared the far edge of the meadow. Along that edge we found a creek running deep enough that we needed help crossing. We found a path and a bridge formed out of bark-stripped logs. We each took a turn crossing the bridge which bounced under our shifting weight. 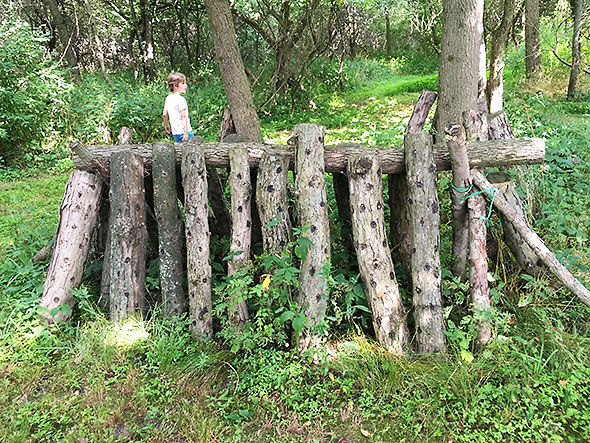 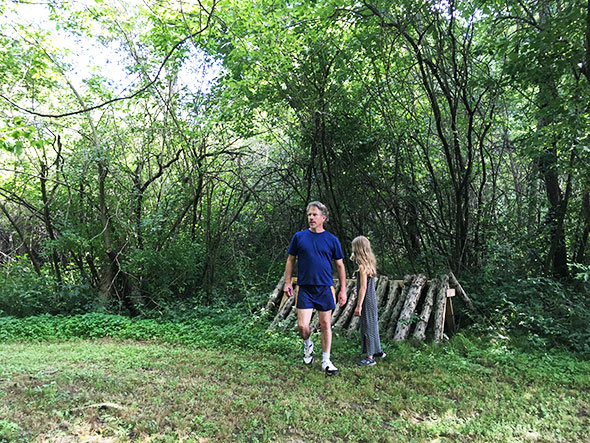 Across the bridge was a mowed clearing and beyond that we could see the retaining dike of the pond. To the north east of the pond stood a windmill that looked like it was connected to a generator. Once we stood on the retaining wall, we could see the need for the wind-powered source and the generator. The pond had two aerators running each matched with a duck decoy. The kids ran to check out the dock and look into the water. I was drawn to the neighboring garden dotted with black-eyed susans so missed my chance to check the pond for the fish with which the pond, we were later told, is well stocked. 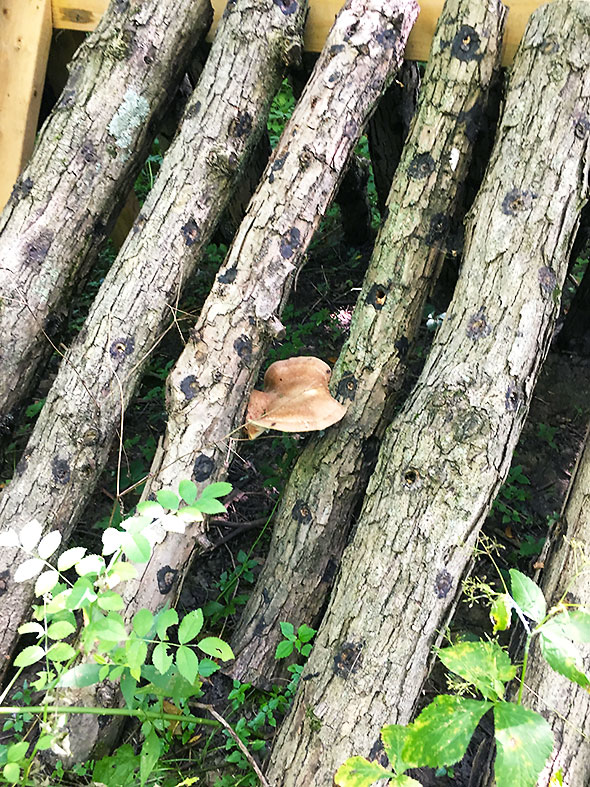 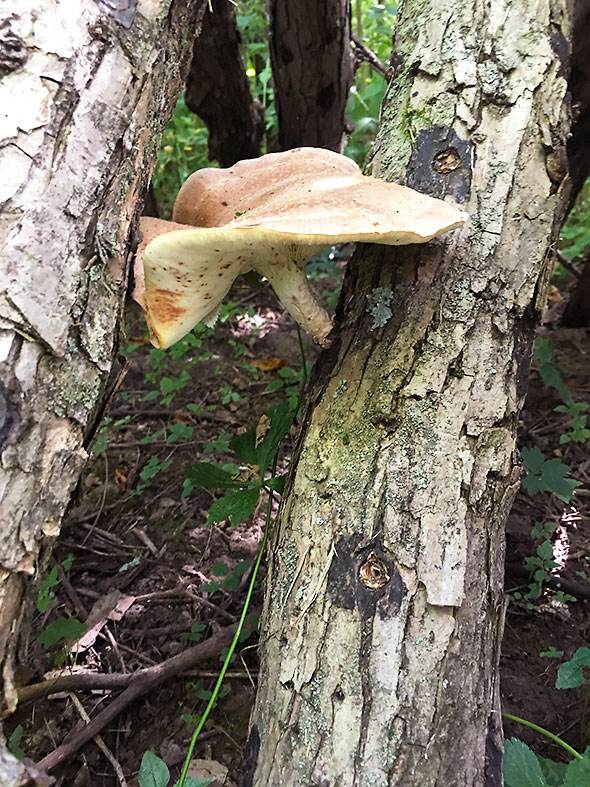 The area around the pond was beautifully groomed suggesting it was a well-loved spot on the property. I walked around the garden, picnic table, and a neat little structure that I assumed but did not confirm was an outhouse. Near the outhouse I discovered another clearing. This area was mowed as neatly as the sunny field around the pond. It was shaded however and as I walked into the canopied clearing I could see its function. We found two clusters of scarred logs lined up like a unfinished miniature lean to. My husband Jeremy wondered aloud what they were for and I guess mushrooms. Indeed we found one large mushroom…big as a steak…growing out of one log. 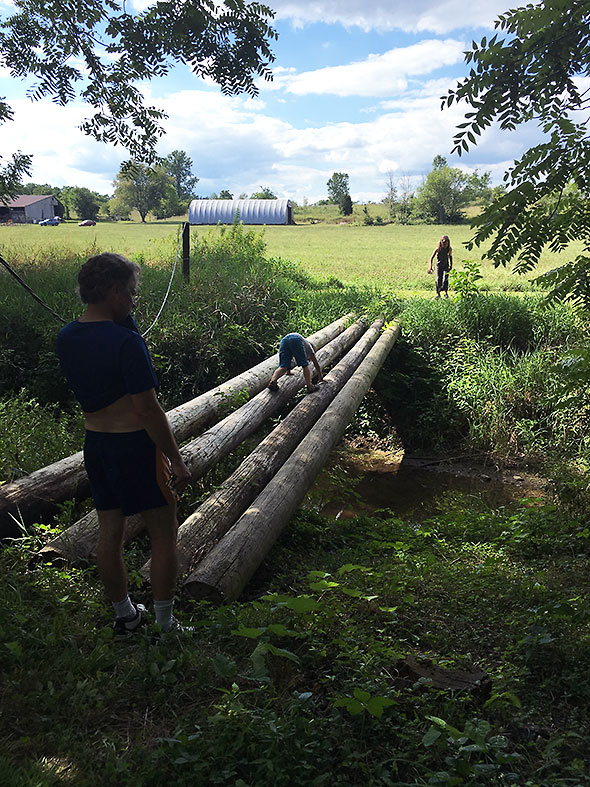 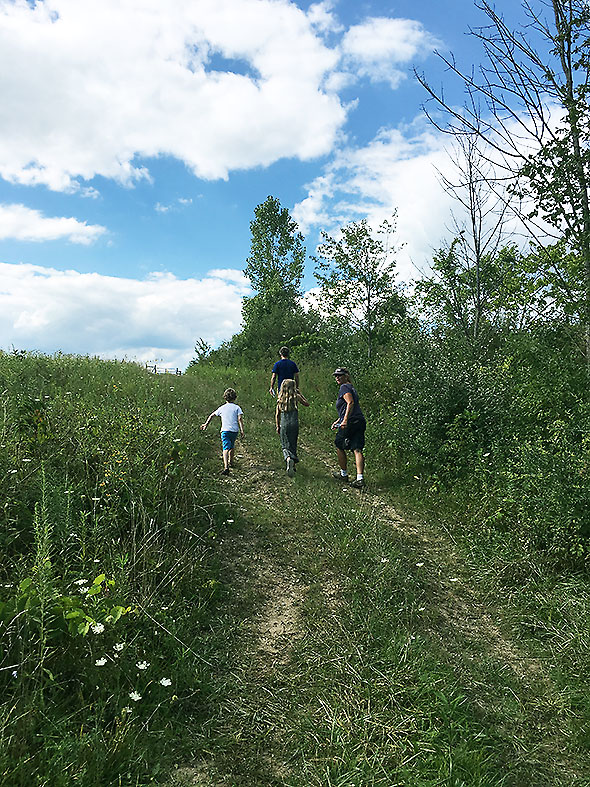 Walking back we crossed the log bridge again and this time took the mowed path that looped counter clockwise from the bridge around the wildflower and alfalfa fields back to the three sided barn. We met up with the farm’s owner just as we located a path that led back to the main house and commended her for the work that she put in making the farm such a marvelous well-tended garden to visit. 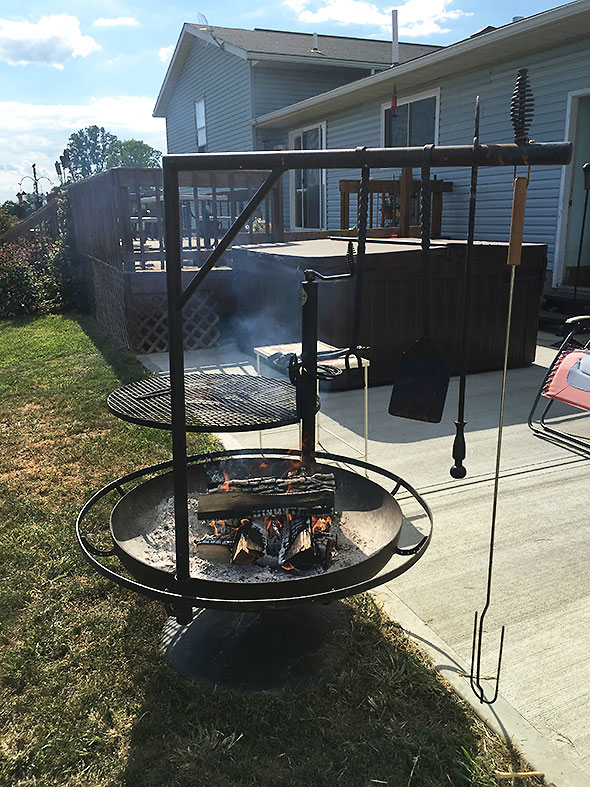 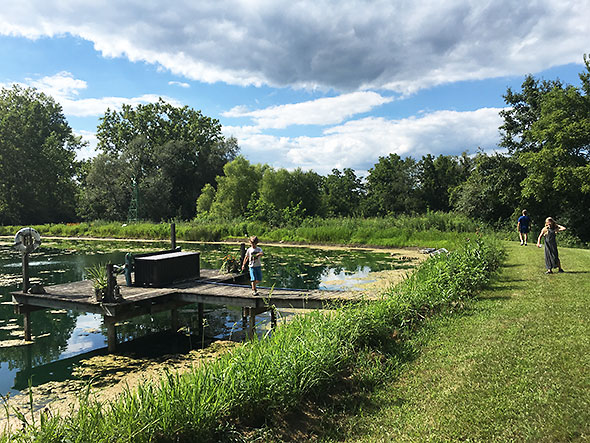 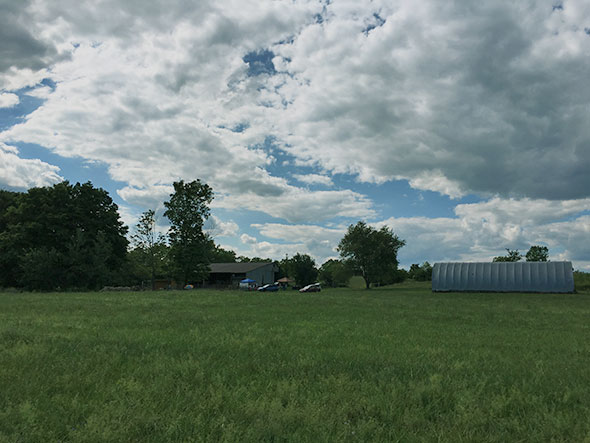 At the house, a wood fired grill was heating making ready for a feast sure to celebrate the day’s successful event. As we walked back to our car, I took one last look back at the house skirted by clusters of black-eyed susans. I thought of Krista Magaw again and though how fortunate we are to fold this beautiful farm into the land trust. To preserve it for generations to come.

Taking our leave, Jeremy drove and decided to take Route 41 back looping through Springfield instead of Cederville and the way we came. We drove south on 72 looking anew out at the farms that line that route and Route 343 as well. We are fortunate to live in this belt of green fields, to be nourished by the farms and families that tend the land. I traced our path home following the map on my cell but this time looking at the satellite map thinking about what made the space we just visited so special. What I loved most about Schutte Farms was their virtuosic variety. They cultivated the land in many different ways and their hard work impressed. The farms of that slice of land are well loved…now by our family as well as theirs. On our drive home, I placed a pin to mark their spot on the map. We look forward to the day that we can return.