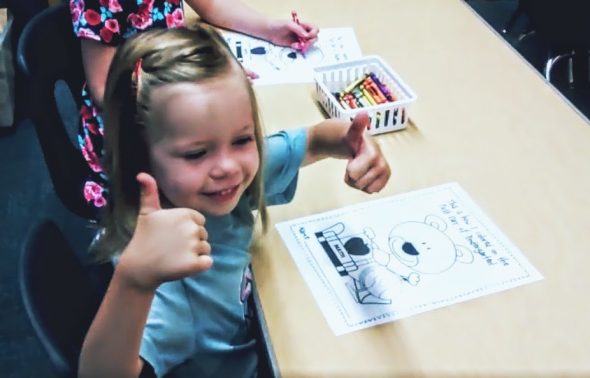 Lucy sits down for her first day of Kindergarten at Mills Lawn.

BLOG — The confidence of 6

I have this memory from elementary school. In my recollection, it was the second day of Kindergarten, though I can’t be totally sure. It’s been more than 25 years, and memory can be chameleon-like, details and impressions changing to match the hue of mood or circumstance. But that’s how I remember it: my second ever day of school, walking into a still-foreign place that was now my part-time home. There was a gym on my left, a hallway ahead, a stair case to my right. The floors were beige tile with flecks of something darker, buffed to a high shine. The ceiling was high, and the echo of footsteps was prominent. I did not remember how to get to my classroom.

My daughter Lucy turned 6 on Wednesday of last week, and two days later, she attended her first day of Kindergarten. We woke her up early that morning, a good deal earlier than she had been waking up for the last several months. My husband Anthony and I had planned to do that thing where you put your kid to bed a little earlier each night and wake them up a little earlier each morning so that they’re adjusted by the time school starts, but this plan was foiled in the days prior by a long vacation, a raucous 6-year-old birthday party, late dinners with visiting family and the fact that Anthony and I are terrible parents.

So when we woke Lucy up early on her first day of school, she was immediately confused; I’d told her before she went to bed the night before that her room needed a good cleaning, and she must have assumed that’s why I was waking her up. “Alright, alright,” she said, and stumbled out of bed, staggering around the room with her eyes half-closed, picking up toys and putting them away.

After we managed to wake her up enough to let her know that we were getting ready for school and not doing chores, she seemed excited, though not overly so. The walk from our apartment to Mills Lawn was punctuated by Lucy assuring us both that she could get there by herself if she had to, by following the blue paw prints that begin on the Winter Street sidewalk near the Methodist Church. Once we arrived at the school, she was cool as a cucumber, and told us, as she sat down to color a picture beside a classmate and new friend, “I don’t think I’m going to miss you that much.”

I love Lucy’s confidence: she’s a kid who thinks she knows everything and can do anything. For example, she’s constantly inventing little contraptions in her room, mostly security devices, the purposes of which are to alert her to intruders, all built from the toys in her room and rarely, if ever, actually functional. Despite this fact, she’s convinced she can build anything. I once told her I wished teleportation existed.

“Why don’t they just build it?” she asked, referring to those ubiquitous “they” who build all the stuff we use.

“Because the technology doesn’t exist yet,” I told her. “They don’t know how to build it. They may never build it.”

“Yeah right, Mom,” she said, with a roll of the eye that was beyond her years. “I can build it.”

(She has yet to make good on that particular claim, by the way.)

Admittedly, this extreme self-confidence can be a drag; I can’t tell you how many times I’ve asked her to put on her shoes, and she’s replied, with a little wag of the finger, a raise of the eyebrow, “Uh, actually, Mom, those are boots.” I will say it’s equal to the amount of times I’ve had to talk myself out of saying, with spite, “At least I can tie my own shoes, dummy.”

I hope Lucy never loses her confidence. I hope no one ever tells her that she can’t do the things she thinks she can do. I hope she never feels like she’s not the smartest person in the room.

I also know that this is precisely what will happen as my daughter grows older. I know that she’ll be made to feel embarrassment, jealousy, shame and indignity when she’s away from home, not constantly praised, when she finally learns to examine herself against the backdrop of the entire rest of the world. She will lose a friend. Someone will break a promise. She’ll look in the mirror and be unsatisfied. Somebody she loves will lie to her, and she’ll know they’re lying. She will want a lot of things that she will never get.

These things are inevitable and some of them necessary, within reason; part and parcel of growing up, of tempering confidence with compassion and, yes, humility.

But they also hurt.

This is why, I think, so many moms and dads cry on their kids’ first day of school. Yes, there’s that wistful element of wanting to hold on to their ephemeral little-ness, but why do we want to hold on to it so badly?

I remember the fear I felt on my second day of school, alone in what was, to me, a giant building, and with no idea where to go. I couldn’t run to my parents; who knew where they were, what they did when I wasn’t around?

I must have gotten to class that day; someone must have stopped to help me, or maybe I wandered around until I found the right place. That’s not the part of the day I remember. All that sticks with me is the fear, the first of its type that I ever felt.

I’m writing this on Lucy’s second day of school. I dropped her off at the front door of the building and watched her walk in, anxious that she wouldn’t remember where to go. She did. She waited patiently outside the door to Mrs. Smith’s class. I started to walk away, headed to the News to start my work day.

Then I turned back, ran in after her, just to give her a hug and make sure she knew what she was supposed to do.

I guess that’s the difference between mother and child, at least in this instance: I’m teetering on the edge of worry at every moment while she’s away, hoping she’s okay. Lucy, at least for now, has never been more sure of herself.