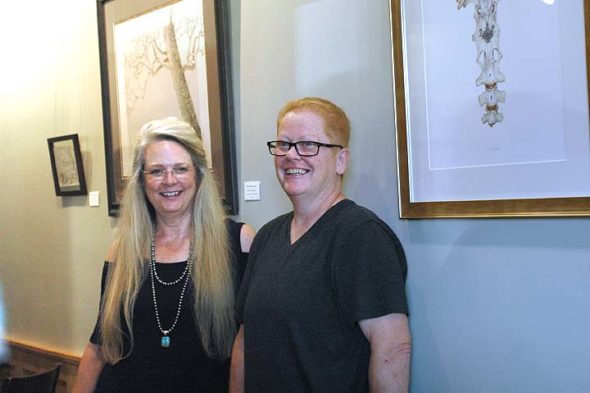 ‘Migrations,’ a new art exhibition on display through October at The Winds Cafe and Bakery, features watercolors by Cathy Ledeker, left, and pen-and-ink and Prismacolor works by Penelope ‘Penny’ S. Adamson. The show is rooted in a 10-year friendship between the women tied to family and place. Around the corner from the Winds, the YS Arts Council Gallery is hosting a separate two-person exhibition, “Shared Views,” through Oct. 16. The Arts Council show features 25 pairs of paintings by villagers Sherraid Scott and Sigalia Cannon, who for more than 20 years have meet most Sundays to paint side-by-side at sites at various area locales. (Photo by Carol Simmons)

Relationships form the girders on which two recently opened two-person art exhibitions in the village are built. “Shared Views,” up through Oct. 16 at the YS Arts Council Gallery, explores the fruits of a 20-plus-year art friendship. Another show, “Migrations,” on display at The Winds Cafe and Bakery until the end of October, is rooted in the intersections of art and family.

“Shared Views” features 25 pairs of paintings by villagers Sherraid Scott and Sigalia C. Cannon, who for more than 20 years have met most every Sunday to pick a site and portray the same scene side-by-side.

“Migrations” showcases more than 20 years of artistic exploration by Cathy Ledeker, of Lawrence, Kansas, and the mother of village resident Emily Seibel, alongside highlights from over a decade of work by Penelope “Penny” S. Adamson, a Yellow Springs native and Seibel’s partner.

The paintings of “Shared Views” include landscapes, interiors and still lifes, each completed within the limited window of time the women share together each week.

“It’s such a neat story to me,” said Nancy Mellon, the Arts Council Gallery coordinator. “The whole image of the two of them making this decision to every single Sunday, to go out and find a beautiful site or a site that speaks to them and sit there beside each other … is so cool.”
The venture began as a means of mutual support. Scott, primarily a printmaker, was interested in working in a different media for both enjoyment and relaxation, while Cannon, whose mother was an artist but who has no formal art training besides lessons from her mother, wanted to put more time and energy into painting.

They started out doing still lifes at Scott’s home. From there, they moved to area parks. Then, they started driving around the countryside to find spots that appealed to them, and if they were lucky, the sites also had shade, a good place to park and quiet. When the weather is too cold or dismal, they move back inside.

According to Scott, “What we enjoy is seeing the way each of us sees the identical view. We usually don’t talk, and at the end we put the pieces next to each other and laugh over the similarities and differences.”

Scott has referred to the Sunday practice as her church. “It’s a very therapeutic and comforting kind of experience, a kind of meditation that allows the mind to rest while the eyes and hands are working on the subject,” she commented in the gallery’s press release.

According to Cannon, the shared weekly painting sessions have had multiple benefits — providing a regular schedule to work, offering enjoyable excursions into the countryside and helping “each of us see things in a broader way than just our way of seeing would provide.”

Mellon, who also works in a different kind of collaborative venture with local artist Corinne Bayraktaroglu as the Jafa Girls, said the creative inspiration of working with another artist can expand one’s perspective. “People don’t realize how much artists get ideas from other artists,” she said.

Cannon notes that she and Scott not only will focus on different aspects of a scene — she’ll pay attention to a sky full of clouds while Scott focuses on the patterns in tree branches — but they also will perceive the same object differently. “We laugh when we notice time and again that my trees and vases come out extra tall, while Sherri’s come out extra wide,” she commented in informational materials for the show.

Shared experience is also a component of “Migrations,” the two-person show at The Winds Cafe. For artists Ledeker and Adamson, the experience is that of family and the places where the journey of their lives comes together.

Ledeker, a professional artist for more than 40 years, first visited Yellow Springs in the fall of 2001, when she delivered her daughter, Emily Seibel, now the executive director of locally based Home, Inc., to the Antioch College campus as an entering student. Ledeker has since returned to the village many times, but this is her first time exhibiting her art work here.

Adamson is a long-time resident of Yellow Springs and employee at Antioch. Her family says she started drawing before she could talk, and art-making has remained a mainstay of her life. The Winds show represents her eighth exhibition in the village.

Brought together through their relationships with Seibel, the women have developed a friendship of mutual appreciation and respect. They each say they’re very happy to have a chance to display their work side-by-side. Ledeker has 18 pieces on view and Adamson has 14.

While the women’s work was not made in collaboration with one another, it is complimentary in style, subject and internal approach.

The more than 30 pieces in the show — watercolors, pen and inks and colored pencil — are precisely executed with exacting attention to detail. Ledeker often depicts combinations of found human-made items with objects from the natural world, while Adamson focuses on scenes from nature, particularly the flora and fauna of the area. Both combine working from observation with memory and imagination. Both also speak of their work as a meditative experience.

Ledeker often starts with a drawing from her sketch book, or she’ll begin with an object in her studio. She said she likes to explore “tension and balance” as well as irony, humor, myth and the human spirit. She’ll often bring together objects in surreal associations: chain links on a tree branch, a snake coiled around a wrench, a red-colored egg balanced atop a bone. “You have to put your ego totally aside and let whatever’s supposed to happen, happen,” Ledeker said.

Adamson said she feels the same. “I’ve never been able to predict what I’m going to do. … I really have to get myself centered.”

“I am transported to a place of still, calm listening in observing the nature that fills these pieces,” according to her artist ­statement.

Ledeker also is interested in finding “calm and visual quiet,” which she believes comes through in the empty negative space of her work. Many of Adamson’s pieces include branches and other objects that extend beyond the compositional frame.

The women said they titled their show “Migrations” because it represents their journey — “walking the path” — as artists and family. Their hope is that the work takes viewers on a journey as well.
Similarly, “Shared Views” offers its own journey — of place, friendship, perception and art.